No Salvation for Witches 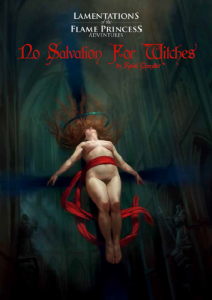 England, 1620. To strike a blow against the Patriarchy, six women perform a dangerous rite in an abandoned priory. Through their art, they commune with Terpsichore, Greek muse and patroness of dancers. Starving demons slither across the moors; monstrous nuns shriek in the infirmary; and within the Attic, a great unravelling awaits. The fate of the world rests in the hands of the player characters. Will they bring about an egalitarian utopia? Will they skulk away in the night, pockets bulging with treasure? Will they bring about the destruction of all things?

The usual Lamentations horrow gorefest. The party stumbles into a region of land and they can’t get out. Inside they see a church surrounded by a glowing forcefield. By collecting some glowing bubbles they can break on through to the other side. If they do this within 24 hours, and stop the ritual in the church, then the status quo of 1620 gets to continue. if they don’t then kings fall, religions die, and the peasants of the world get to be a little better off as the entire world begins to convert to the commie witches in the church. Scattered through the church, and the land, are the usual LotFP bizarre creatures and fucked up situations. It’s a decent enough adventure and hits several of the points I admire: fucked up creatures, fucked up magic, nice mundane trease, and mostly human antagonists mixed in with bizarre abominations. It’s a bit wordy, but it’s organized well. And, news flash, making the first line of the text “This is not a low-prep adventure.”, as this adventure does, does not in fact excuse the designer from providing supplemental data and/or well-organized information.

The big Lamentations adventures suffer from the same kind of flaw: they create Big Changes. Death Frost Doom famously starts the zombie apocalypse. In this one the workers of the world finally unite and a world-wide version of the Reign of Terror begins.The absolutist commitment to the vision is admirable, in a trainwreck gawking kind of way. And now, back in the real world, how many of us have nuked our campaigns because of a published adventure? How many are willing to? While I admire the commitment to the vision, my standards can’t allow for it. The adventure is a tool for the DM. What I expect is a page on how to destroy the world and perhaps a paragraph or two on other impacts than destroying the world. Some ideas on a timeline, a course of events and so on. Some ideas to kick the pig. What’s done in this adventure is the open-ended high-level descriptions that I’m not too fond of. Too generic. Too high level. It needs grounded in order for the imagination to work at its best. That’s a lot of bitching about the ending, but it’s also standing in for the bitching I didn’t do at the apocalyptic endings of the other LotFP adventure. Oops.

This has the monsters you would expect in either a Chandler or LotFP adventure. Weird human hybrids and a prominence of nudity, penis weapons, and gross out birthing scenes. The creatures are a pretty good example of how to work this style into an adventure. They generally relate to the circumstances the creature is found in and their effects are somewhat related as well. None of this “the golem is invisible because he wears a ring of invisible.” Oh no, the creatures here are abominations front and center and don’t need no stinking mechanic/rule to make them so. Bravo! Well described, there’s enough information to cement them in the DMs mind so they can adequately communicate the horror to the players. There does seem to be a theme of blob-creatures in this adventure, with three of four showing up, most in true “get bigger as they eat” blob form. Lots of hybrid humans, mutated humans and so on. Nicely weird, nicely non-standard, they fit in well to the environments in which they encountered.

I’m pretty fond of the simplicity of the maps. A nice little wilderness map that combines “nice looking” with an almost abstracted design. It’s quite clear, as are the interior maps for the church and grounds. My primary complaint here would be … the scale and/or timeline. We are told to keep careful track of time (24 hours till the ritual completes!), and yet the map has no scale and the booklet no instructions on travel time. This gets back to that concept I harp on a lot about the adventure being a play aid for the DM. Sure, I can make something up and go consult the travel time sections in the book. I could also compile all of the monster stats onto one page, along with NPC personalities, so I can run the (probable) big final encounter in the church. I can also go create my own adventure, or use a thesaurus as one also. I expect the adventure to help the DM run it. You don’t need to reprint the rulebook but missing a key feature in a timed adventure shows this fundamental disconnect.

Lamentations adventures have an interesting way or being organized. Well, this one does and I recall the others being of a similar design. I spoke earlier of the almost abstract nature of the wilderness map. It looks like a normal wilderness map. The encounter areas are “the forest”, “the pond”, “the village” and so on. This is what I’m referring to when I mention the abstract nature. I wish I could describe it better. It’s absolutely not abstract. Except it really is. This leads back to the adventure descriptions. The Woods description appears on one page, describing the one encounter there. The Pool appears over two pages. The village appears over three pages. It’s a pretty simple way to organize the adventure and it works quite well. After all, this isn’t really an exploration adventure, it’s more an investigation. In each of those sections you get a description of something, or maybe two or three somethings. The descriptions can be quite long but the environment proper is simple. The pool description is quite simple. It focuses not on the pool, which is given but a simple description, but rather a paragraph on the undead fish in the water. Then the red sphere floating over it. Then the frozen tree on the other side of the pond. This alone gets a page. The descriptions are short. Are they? Wait, no, they are sometimes short. What they do is convey the flavor quickly and memorable. Because of this it’s pretty easy to get a grasp of what’s going on, quickly, and thus run it. It’s a very non intuitive way of organizing things and works, I suspect, because of the digest size with two columns forcing a kind of natural rhythm and breakpoint.
Where this breaks down is with the major NPC’s. They are scattered all over the book. Some descriptions in the church, some up front before the keys begin, some in the keys. The adventure encourages a very chaotic ending, with everyone you could possibly encounter almost certainly showing up in one very chaotic ending. Even if that doesn’t happen you’ll have stats & descriptions scattered through the church section … except for all of the major and important NPC’s scattered over a half dozen pages near the beginning. Flip back & forth or create your own cheat sheet? This is why I like summary sheets being included with an adventure. Briefly stat’d, reference to more information, quick personality, Done.

There’s no real hook presented. A little work could have gone into creating one beyond “you stumble onto something weird.” The flaws in this adventure are minor though, and with a little thought (hook), and some prep work (stat sheets/notes) you could have decent little adventure to toss at folks. It brings a good mix of horror, without going TOO far into bizarro penis-monster territory (quite an accomplishment given the presence of more than two penis monsters in this adventure.)

I’d have no qualms about running this.

6 Responses to No Salvation for Witches