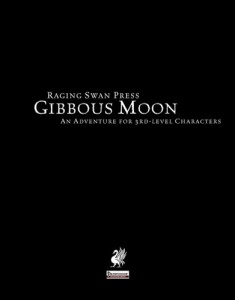 Months ago, the necromancer Dunstan Wymer was gored by a wereboar and infected with lycanthropy. Almost driven insane by the realisation of what he had become after awaking amid the gore and viscera of his companions’ eviscerated corpses, he has since shunned civilisation instead seeking only solitude and the company of his undead servants. Terrified of the savage, bloody deeds he performs when the full moon shines down upon the world he now lurks within the remote hermitage at Clear Pool. In a desperate attempt to control his terrible, atavistic urges he has taken to stealing cattle from a nearby village to assuage his bestial lust for fresh, bloody flesh. The unknowing villagers, however, are angry at the continued theft of their livestock and the arrival of a passing band of adventurers gives them the perfect tools to bring the culprit to justice…

There’s at least three adventures with this title. A normal version, an expanded Collector’s Edition, and then some Living Forgotten Realms adventure that I’m pretty sure is not related. If you’re going to pick up a copy of this mediocre werewolf adventure then make sure and get the right one.

As with a lot of adventures, this one doesn’t know what it wants to be when it grows up. Because of that you get some great stuff mixed in with a lot of half efforts … or less. Ostensibly about a sad wereboar, it tries to mix in some village politics and village life and some modern morality. The party either investigates some missing cattle in the village or gets hired to go to the lair, proper, to pick up some old hermit bones for a relative. The effort to put into these is minimal and they rank just above “Look, we’re playing this adventure tonight.” Lots of words, lots of detail. None of it very interesting. If you’re going to put in words then put in words that are NOT obvious. In both cases they are introduced to the village, it’s problem of the missing cattle, and then end up at the old caves to meet the new hermit. He’s a not-so-evil necromancer who has a bad case of wereboarism. You get extra XP for curing him or getting him to pay the villagers for the cattle he stole. I hate that kind of shit. Hmmm, do I? I hate XP for “correct” morality choices. The inconsistency of the system is lame. XP for overcoming monsters? Sure. Treasure recovery? Ok, if that’s your deal. For being goody-goody? Well… did you tell the players that they are in a goody-goody game and get their XP from being goody-goody? Expectations.

The NPC descriptions for the village provide more fodder for my opinions. “Fierce advocate for a pastoral way of life” is a nice NPC description. So is “eternally nosy self-appointed sheriff.” These are things you can work with and are short enough to not get in the way. “Angered by recent thefts” or “proponent of greater trade & industry” are not as good. In these cases we get more facts than personality, and the NPC descriptions suffer because of it. This is a continuing theme in this adventure. Brief hits with a lot of misses in between. Another good example of this would be the read-aloud in the first room of the cave system: “Dried gore and blood cover the walls and floor. The ceiling bears sprays of dried arterial blood. Ripped, torn and partially eaten animal corpses are scattered about the chamber. “ Short and to the point while still being evocative. But then the kitchen read-aloud describes a typical kitchen. WTF? Text that describes “normal” things is wasted text. This goes for the village description, the read-aloud everywhere, and the cave/wilderness sections. We don’t need a kitchen described to us. We need the unusual described to us. We need the area cemented in our heads and we already have that with most normal areas.

The village presented is supposed to have some conflict going on The pastoral villagers vs. the industrious dwarves. The fey running around in the village. But neither of these is really expanded upon in any way. Just throw away lines in a rumor table or the villagers not really sitting with each other. Instead of the village being a focus, which it should be, instead it’s just barely interesting in any useful way. Oh, there’s lots of text, but it’s unfocused, describing the mundane instead of the potential conflict. There is a great table for events happening in the village. I think there’s like six possibilities. Rather than rolling I’d suggest running all six at once, along with all the dwarf/villager tension, the missing cattle, the hermit bones, and everything else. Adventures are a pretext for the party to get into trouble and more stuff means more trouble, and thus more fun and memories.

The cave system only have about 5 keyed rooms, and only a couple with stuff in them. There’s a nice little random “what you find in an empty room” table, but again it’s a little out of place. Most of it seems to be geared towards a running battle; slick floors and the like. But there’s not really much opportunity of that kind of thing to happen. And why make it a random table? What does that add? Just put the stuff in the empty rooms and gear it toward something in the adventure.

Focus. Focus on the adventure. Don’t focus on the mundane. Don’t focus on the forms. Don’t focus on the stat blocks. Focus on the adventure. Focus on the wonder. Focus on the unusual. Sadly, this adventure doesn’t do that. When the adventure does that it’s great. The read-aloud I quoted is a good example. There’s an NPC described, a captured thief adventurer. WHen you free him he retires to become a fence … and thus a contact for the party. That’s a GREAT thing. None of this “and they send you a reward later” stuff. It’s gameable. It introduces long-term changes to your game, things you can leverage easily in the future. Gameable. Interesting. And then the adventure gives us this, for the main villain: “Socially ill at ease and awkward in crowds he reacts by erecting emotional barriers and keeping social interactions as superficial as possible. He secretly harbours a desire to be a painter, but lacks the skills and materials.“ And that’s just one part of the ten or eleven paragraphs used to describe him and advice on how to play him. Do we really expect he painter shit to come up? Is it interesting? Is it gameable? Does it have direct long-term impact like the fence stuff does?

It’s sad that this is a mediocre also-ran. It could been great. It coulda been a contender.

This is on DriveThru.