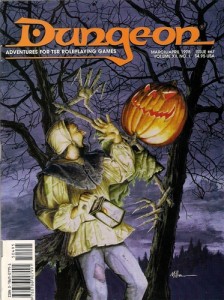 Several adventures in this issue that come pretty close to being usable.

This is a charming and delightful little adventure ruined by the verbosity. It’s one of the lamest of hooks: you’re hired to go fetch some spell components. But it’s done very very well. The maps of the wilderness and village are well done and clear (although the named of the shops could have been put on the village map to help out) and has a great little table to tell the DM who knows what about which spell components and where they can be found. Imagine that! Putting the information the DM needs in an easy to find it format! There’s also a nice colloquial rumor table, done in story format. These are much nicer than the fact-based rumor tables, especially when worked in Grandpa Simpson style. The villagers are friendly and helpful, if a bit bemused, by the party. It seems like most of the netires have something going on, and there’s a richness of style present throughout, such as the half eaten fish skeletons that the local goblins leave about in several places. On the negative side there’s a lame “usable only once” magic item, a dead man’s hand. Cool things like this should have a second use, at least, for the party to take advantage of. Carrying around the hand of a hanged man grasping a black candle is much more interesting than a stupid old wand. The writing style is also a bit too verbose. While the main encounters are a little long, the smaller keys are terrible. Way too long for what they are presenting and not nearly focused enough. The CONTENT is good, but it’s buried in the verbose conversational tone that it’s written in. This is another one of those adventures that needs a modern rewrite. [It’s always a good sign when I go research what else the author has written. In this case … Hey! I think I played D&D with this guy once! Or, rather, QAGS. I think I played his Gilgamesh QAGS game at Origins. I have my character sheet framed; it’s the first thing you see when you come in the main doors of the house!]

A side-trek. LAME! But Awesome! And LAME! It’s fucking Chaos and I LUV LUV LUV chaos, especially in it’s non-cave form. The party is coming through a hellish thunder/lightning storm. Up ahead they spy a small hamlet. Dogs and children run about like crazy, being chased by women. Men madly dig impromptu shelters for their families. And the headman just concluded business with a lightning rod salesman in the middle of town … The party gets to put a lightning rod on top of every house in the middle of a lightning/thunderstorm. Yeah Adventuring! Imagine the chaos! The lame part is that the salesman is a elementalist summoning the storm and working with some “thunder children” to make the storms rage. LAME. Cooler if he was just cursed and making the best of it, or it just freakishly followed him around or something. The storm is a series of complications, but no more mention is made of the dogs/children/men/women. Those are the key to this, IMO. The lame ass combat stuff is just boring old also-ran. But the chaos of surviving a storm, with terrified villagers about? That would make a GREAT side-trek! But, alas, that’s not this adventure … this one is a hack fest.

It is SO very hard for me to get past my prejudices. This is a training ground adventure (Duh!) This must be the lowest form of adventure. No pretext of adventure at all, just a bunch of shit that the players have to figure out. Suck it you fucking haters of the metagame, the Training Ground adventure writers know the score! On the plus side this has a flaming skull that can join your party, and a nice magic item in the form of a bag of bones you can pull skeletons out of. On the minus … well, it’s a completely crap training grounds adventure. The hook is a comically murderous Zent wizard. On the way to the dungeon you meet a ranger. Who has nothing to say to you. (Why the fuck is he even in this adventure? Am I missing some bit of FOrgotten Realms lore/trivia?) Then it’s room after room of challenges. 20 or so if I recall, in a proving ground an old evil overlord once tested mages in. Joy. Why not just open the monster manual to a random page and announce that there are now 7 ogres in the room. At least TRY to come up with an idea!

Fucking piece of shit sidetrek adventure! A leprechaun gets captured by two dudes. His brother asks the party to free him. I have no idea how any other adventure pretext could be so implausible. Fuck no, I’m not freeing your brother! Gimme the gold and wishes you little bastard! Fucking fey! How many times have they tortured party members! Payback time asshole! Oh, oh, oh, if you try and talk to the two two dudes they attack immediately. Isn’t that fun? No bargaining. No Bilbo Baggins and the Trolls. No Bilbo and the Spiders. Nope, They just attack. That’s the most boring thing that can possibly happen. Exploiting leprechauns? THAT’S exciting! So of course you don’t get to do that.

The most Call of Cthulhu adventure I’ve seen yet in Dungeon. Strange things happen while on a train journey, ultimately wrecking the train. The party is trapped in a small appalachia town. There’s a cult that killed someone who was stranded EXACTLY ONE YEAR AGO. (duh Duh DUH!) The ghost is back and making trouble, trying to get the party to unmask the cult. The train journey is the hook, and thus quite railroady. (Get it! Train! Railroad! Literally in this case! I wonder if that was on purpose?) Anyway, the town portion is quite nice. The town is nicely described, very tersely by Dungeon standards but with lots of interesting things going on. I would have appreciated a summary page for all the NPC, and a few more non-plot NPC’s thrown in. IE: the usual village problem of anyone interesting automatically being under suspicion. A little more local color would have been nice also. Just a little table of one sentence per line with kids pulling pranks, christmas activities, etc. Another one that could use help.

Uh. This is a sidetrek, but not labeled as one. It’s a cavern in the underdark. Ruled by a giant undead mushroom. He’s animated some bodies with his spores. They hop around after the party. “Bloated corpses who, when hopping, their flesh almost jiggles and jostles off of their body.” That’s nice. The adventure need more of that and less of the lame ass factual descriptions. Chris Perkins, why can’t you do more of that? Why do you have to surround the good stuff with so much mundane crap? Just edit it out if you can’t awesome it up. Your adventures would be better for it.