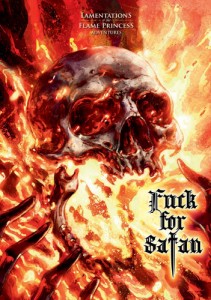 Animals and children have gone missing from the village of Schwarzton. Locals suspect that an old Satanic coven has re-established itself! Can your intrepid heroes survive dread dungeons and bizarre monsters and save the day?

Well, it’s not as bad as some of the other Raggi adventures. As the publishers blurb says, some kids have gone missing and there was once a satanic cult around. The adventure comes in three parts. The closer you get to the actual cause for the disappearances the shorter the details. The first part is where the party is generally directed and makes up the bulk of the text of the adventure proper. It’s a red herring. The second part, usually triggered after the party gets back from the dungeon in the first part, takes up quite a bit less space and it, still, essentially, unrelated to the actual cause of the disappearances. The third part, the actual cause, is a couple of paragraphs long. A random bear has wandered in nearby and ate the kids. Random chance each day the party stumbles on to the bear. Everything is pretext. Everything is unrelated. It’s just an excuse for the party to stumble around until the bear shows up.

The adventure gets off on the meta. The summary above should clearly illustrate one aspect of the meta. In another part, right outside the dungeon, the party finds a note for them that clearly indicates that the dungeon has nothing to do with the missing children and they should not go in it. In another part the DM is instructed to make their next adventure very easy because one aspect of the adventure has cursed them, the referee. Clearly Jim has fun breaking the fourth wall. All of that nonsense is just performance art. Or, worse, it breaks the contract with the players of the DM being a neutral third party.

The DM has absolute power. The players put themselves at the DMs mercy. There is a contract here. The DM will be neutral and not be a dick and the players will play. When that is broken we get to Killer DM territory; the junior high DM would views the game as adversarial. “I’m too good, You can’t beat me!” one potential DM once told me. I wisely did not play in that game. When the DM goes meta there’s a problem. I’m not saying this adventure does that. Or maybe I am. I’m not exactly sure where the line is. I do know this adventure walks VERY close to that line. One of the most delightful parts is the note addressed to the party. It tells them not to go in. The DM is clearly fucking with the party by putting it in. Is a META note like this FAIRLY fucking with the party? I don’t know. Like I said, it’s close to the line. I like fucking with the party. I like tempting the party. Putting in a deathtrap dungeon, having all of the PC’s say the solution to the quest is in the deathtrap dungeon, putting a sign outside the deathtrap dungeon saying “Nope, the missing kids are not in here.” … I don’t know. It’s too close for me. Maybe it’s a mean-spirited”fucking with the party.” I don’t know.

The satanic cult aspect is quite nice, with a misunderstood alien space penis. It’s a cute little section and it’s too bad that the only you can find it, probably, is after exploring the deathtrap dungeon. That smacks of linearity. It’s a great section where everything makes sense and the party gets one up on the local dirt-farmers with a fellow buddy. A little silly, but in that way all D&D adventures tend to get when they are the most fun, and not much sense of the entire situation being forced (except in getting there in the first place.)

The village is non-existent. There is a lot of padding at the beginning with designer exposition (not much/any useful) and a couple of pages of a long example of play. Instead of this nonsense Raggi could have included some nice NPC’s for the village. The play example is quite colorful but meaningless to the adventure. A page of Pembrooktonshite NPC’s for the village, or the two NPC’s in the play example condensed down to three sentences each and augmented with a dozen more … any of this would have supported the village play. As written the adventure does next to nothing to support this major portion of the adventure. Not good enough! You’re meant to fuck around the village for a long while. And there’s nothing. Well, almost nothing. There’s a pretty good rumor table.

The dungeon is decent and more good than bad. “Bad” in this sense is “Jim Raggi Random Deathtrap.” Again, it’s important for the players to know the consequences of the decisions they make. When very bad things happen to them out of the blue, or seemingly out of the blue, it can seem random. When they KNOW they are making a decision it’s so much more wonderful. Putting a nice treasure on an obvious pressure plate? DELICIOUS. Putting a death trap around the corner at the bottom of a long staircase with no warning? Uncool. This type of nonsense encourages game-slowing behaviour. The kid where the party searches every ten foot section of the dungeon corridor. The kind where it takes 15 minutes of real time to open every door because the hinges, direction of the door swing, construction, etc must all be examined and dealt with. There are a couple of these things in the dungeon. There’s SOME room for this stuff at much higher levels when augury/etc come into play for the characters, but I don’t get the sense that this is a high-level adventure. But there’s other stuff, more of it, that is good. There IS an obvious pressure plate. There’s a room with levers that do things. The stairway deathtrap DOES have a good effect, both in the trap and in the solution and in the color.

Treasure is good, nice and unique. Monsters are good, as they always are in LotFP adventures. New creatures, well described, unique abilities tailored to the environment/creature/theme.

Jim goes on a diatribe/monologue in the beginning about how he gets bored and the quantity of adventures on the market. How he’s not inspired and thus this is how the Meta aspects of Fuck for Satan. I would assume, he’s justifying his other adventures as well … at least the gimmickry/gimpy ones. It’s too bad he feels like he has to do something with a silly gimpy gimmick for it to be interesting.

The village needs an overhaul. The dungeon is nice, if meta and little unfair. The cult is great as an ending. The parts just don’t work together well because it’s meant to be a screw job. Is it fun playing a game you know will be a screw job? (Jim directly advises the DM to not let on it’s a LotFP adventure/screwjob.) Adversarial D&D is not my thing. Maybe Jim should write Fiasco playsets?

2 Responses to Fuck for Satan