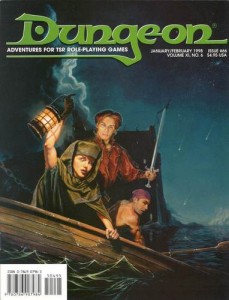 I’m a little fond of this adventure, maybe because I’m fond of those 70’s giant animal/horror movies. A woman begs you to find the source of giant animals that just attacked/killed her. Moving into the forest the party encounters many varieties of giant animals until they find the source: some magic potions at the source of a stream. Creative thinking is probably more important than hacking away as ogre-sized bunnies and buffalo with 5’ long hooves are encountered. The tropes comes strong with raccoons hunting a trapper, a bunny chasing a wolf, and so on. One thing I REALLY like about this adventure is the way a decent sized wilderness map is presented, with encounters all over the place, so the party can choose to avoid the swamp, or go through the mountains, or whatever. That’s a good way to support the DM. The encounters are lengthy, but that’s to be expected. This is quite the inoffensive adventure.

A good example of a decent setup being ruined by length. A vengeful dwarf and an (unknown to all) evil one seek the parties help to kill an evil giant. The giant is actually the victim. Decent roleplay here. Could be a paragraph instead of 2 pages.

A fetch quest underwater with a “surprise” villain. Captain Bob, the paladin, wants you to go search a seawreck for the body of his friend and a magic armband. On the trip there on Captain Bobs ship there are some killings by a sea monster. The wreck has a ghast, some sea creatures, and a vignette showing Captain Bob did something evil. In the spirit of “The Journey is the Destination”, the sea journey is one of the best parts of this and it’s because of the ship/crew. This is an oared ship with a couple of hundred oarsmen and about a eight to twelve well described crew. Everyone LOVES the captain even though it should be obvious to the players that he’s the monster after the first night. There should be some delicious tension here as the party tries to figure out what to do with a couple of hundred allies of the captain on board. The destination is never as good as the journey, and it’s not in this either. The wreck is lame, overly described, and not very interesting. You get water breathing potions from the captain to explore it. Hint: If you have to give the party stuff to make the adventure work then you probably have a big problem in your adventure. I love adventures that telegraph and this one does that, putting the party in a precarious situation. I just hate the underwater portion with the madness of someone prejudiced against underwater adventures.

This sidetrek is an elaborate ambush on a rope bridge. How many rope bridges have ambushes? Fewer than the number of Side Trek’s that feature Elaborate Ambushes, I’d wager. It’s just a pitched battle with the orcs having the perfect set of stuff they need. Set Pieces are boring. Am I the only one who thinks they are boring?

The party needs to infiltrate a pirate town and find a spy and get him out. It turns out he’s got a pirate wife that may not want to betray her pirate friends. The party is clearly meant to get captured/etc and run The Pirates Challenge, a gauntlet/test which takes up a large chunk of the adventure. I’m not fond of these sorts of things. I like a funhouse but not a gauntlet/challenge. I’m fond of a few of the parts of the challenge, especially the first one which is more of a pirate word trick (“All pirate journeys start with a drink! “ if they drink …” you’re not pirates yet!” lash lash lash) The entire place is a little too together. Underwater evil elf patrols with killer whales, ramships, a chain over the harbor, cannons, gargoyles flying around … it’s a little too “complete the adventure the way the designer wants you to.” The open ended nature of the assignment is nice, in theory, but could use more some advice to get things going. It’s a little too “room/key” to support an infiltration/spy mission. In one room entry it notes that to keep up morale sometimes entertainers come in to the closely guarded citadel. That sort of stuff is better moved outside of the keys, for example. The amount of supporting infor for the DM is quite small, at least the amount that’s actionable.

A small nine room cave with some orcs and medusa. There’s not really much to this. It’s got a pretty lame backstory and hook, all to justify the orcs & medusa in the same cave. Generic Adventure is generic.

A weird adventure. A boy is lost in the forest. Hope someone in the party can track! Eventually he’s found. He tells of a tiger. The party is hired to kill it. The party might then do that. They might also find the tiger’s lair. Inside they might find a journal. They might return the journal to the family. The family will hire them to find a temple that will turn the tiger back into a man … turns out he’s been poly’d. This is part 2; the temple grounds are detailed. Pretty tenuous ties, I’d say. The temple has an arch that does 2d4 damage to clerics and MU’s going through it … without warning. That will kill the firsties and maybe the seconds as well. Ouch. The ruined temple grounds are ok, nothing special, but the beginning is really just one big hook and requires a lot of things to go right to work. Plus: plot reveals via journals, letters, notes are lame and lazy. If you have to resort to it then you should rewrite/rethink the plot/adventure. Fire & Torture are popular alternatives.