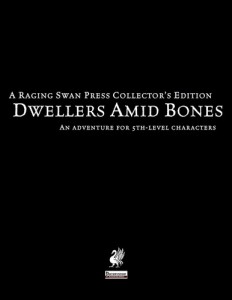 Lurking in the watery depths of a fallen orc tribe’s sacred burial cairn amid the bleached, broken bones of savage warriors, honoured champions and mighty warlords the forest drakes Arduthal and Ingeirmaugh have made themselves a comfortable, safe home. Periodically emerging to ravage the surrounding countryside their depredations have reached such a level that Baron Liofa Othen begs the PCs to slay the foul beasts. The cairn’s remote location, inundated, bone?choked passageways and the vengeful, possessive ghost of the orc champion Gork Shattershield, not to mention the drakes’ mistaken identity as green dragons, all stand in the way of the PCs’ victory.

We all have these internal stereotypes about things. A frequent stereotype of modern adventures is that they are verbose, linear, and more encounter based. I try very hard to not fall into those prejudged traps … and then something like this comes along: Verbose, linear, and encounter based Pathfinder adventure. There are some decent parts to this but the slavish devotion to form results in a 21 page adventure with five rooms. And they are not very good rooms.

The adventure proper doesn’t start until page ten. The rest of the beginning is introduction, background, explanation of how to do an appraise check for item value, or how to identify magic items. There’s a room underwater so the adventure also has three pages of filler at the end that includes two pages of underwater rules. For those keeping count we’re now at eight pages for five rooms. TO be fair, the constipation is at the beginning and end, and thus easily ignored, but that still means that we’re averaging 1.5 pages per room for the rest. I’m a softy, so explaining the idiosyncratic rules at the beginning and end is ok with me. The room keys, though, are sacred. And the room keys in this stink.

Long keys. Descriptions on separate lines in each room for illumination, ceiling, and features. Creature descriptions that are half a page long, at least. Each room has three or four features and each one needs a full couple of lines of description.
Bones: Bones cover much of the floor.
Shallow bone piles add 2 to the DC of Acrobatics checks.

That’s about the 900th time time that we’ve been told in the adventure that shallow bone piles add 2 to acrobatics checks. I can’t remember my kids age but I sure as hell now remember the modifier to acrobatics checks for shallow bone piles. The pain in the ass part is that this garbage nonsense is mixed in with some decent stuff. The author says, somewhere in the first 10 filler pages, that they like to present interesting environments to provide tactical options for the players. I might quibble with the reasoning but the outcome is one I agree with. Large piles of bones ARE interesting. So are escarpments, muddy and slick banks into pools of water, and many of the other features presented. It’s just SO verbose and repeated SO many times that it reads more like a 4.0 encounter than it does a environment to adventure in. Does the muddy bank exist because you needed a feature in the room to provide tactical options, or does it exist because it’s a pool of water that, of course, has a muddy bank? For the most part I don’t think it matters, as I mentioned previously, the outcome is the same. But it does come off as lame encounter-based.

The linear nature of the environment doesn’t help. Five rooms, essentially all in a row. A meh background of orcs bodies tossed in a cave and two dragons who moved in. A boring rumor table presented in a fact-based format instead of adding color. It’s all just … boring. Slavish devotion to form. Slavish devotion to the standard fantasy tropes.

What’s frustrating is that there are bits and pieces that are quite good. One NPC is “impressively chauvinistic.” That’s a great description! There’s a great hook for a ½ orc character that involves a vision from an orc god, along with some nice modifiers and a good conclusion. That’s a great little bit to spice things up for the ½ orc. (Everyone likes to feel special sometimes.) A holy vision, with +2 morale modifiers to hit and saves because of the bloodlust/motivation with cleansing the defiled site. Great! And it comes with a reward of turning the bloodlust ability from ½ orc limitation to full orc limitations. AGain, perfect! Non-standard but specific to the character. Likewise the treasure is great. A sword with a dripping blood motif hilt. Scale mail that have the scales looking like severed ears. Those are great! Those are the types of items that tempt the players into keeping them when more powerful, but boring, items show up. The muddy stream, a steep escarpment … all great.

This is available from DriveThru.

2 Responses to Dwellers Amid Bones