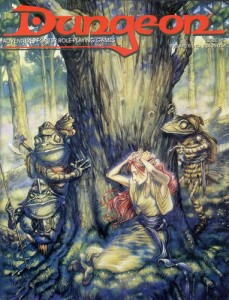 Your motivation here is that a town you call home is threatened. Lame. PC’s are murder hobos with no families precisely to avoid this kind of ham-handed DM manipulation. “Get married? Fuck No. I don’t want to go rescue her next week and every week for the rest of my life.” Go find a treant who can tell you how to go find a druid. A couple of forest encounters, the treant is insane, and the druid dungeon is full of “tests.” Oh boy. Tests. The only good thing about this adventure is a couple of monsters who don’t immediately attack, a dryad and a stone giant. How refreshing. This thing is BURIED in text, even by Dungeon standards. It like to explain things. A LOT. “A trigger spell activates a blah blah blah spell which activates a …” It’s fucking magic. The sword flies around because that’s what swords do. “Perhaps the purpose of your life is to serve as an example to others.”

It says Spelljammer, but not really. The party sees a shooting star. Finding it next to a moorlock cave, they kill/scare away the creatures. The star is a crate, with two gnome robots in it. Some spriggans show up. Hilarity ensues as the gnome robot gets confused. Eventually some Spelljamming gnomes show up and ask for their robot back. There’s not much to this, and far, FAR too much text to describe what’s going on. That’s it. Nothing to see. Move along.

A tiny pirate encounter. A hill giant throws an anchor grappling hook at the parties boat while margoyles fly over goblin raiders. And this is an adventure? “Next week please write 62 pages on a room with an orc and a pie.” That’s it. Nothing to see. Move along.

This is quite the long desert fetch-quest adventure. Find the missing prince, but you need to find the old vizier first. To do that you need to travel to an oasis. The folks there won’t let you have the vizier unless you kill the dragon. Travel to the prince’s valley prison. Meet locals. Invade mage fortress that has captured prince. There are bits and pieces of good design in this. Some of the creatures you encounter are doing things; dragging away a dead body, or in the process of attacking others. Some of the magic items are decently described, even though they only show up in a big treasure vault at the end. The apparatus of Kwalish shows up (I don’t recall ever seeing one in an adventure before … no, the 2E artifact adventures (Axe, Rod, Vena) don’t count.) It’s mostly long. It wants to be realistic and tries to cram in data, but it does so using the traditional room/key format, with lengthy introductions. If Baichtal was more familiar with sandboxes then it may have turned out different. “Tedious” is what I would use to describe this one.

It’s only three pages. A woman comes running out of her dress shop, complaining of a ghost. It’s actually a thief with a ring of invisibility who is stalking her. That’s it. Nothing to see. Move along.

This is a scene-based adventure that is primarily underwater. A merchant has suddenly regressed and is an idiot. The other merchants pay the party to find out why. Clues lead to the sea, where the party finds out about some hags that cursed a siren. Murder Time! There are some nice bits of descriptive text scattered throughout (wicked paring knife, they keep three feet to gnaw/snack upon, etc) but it’s mostly crap. The scene based layout is combined with mountains of text that doesn’t really say anything. (Talk about hand-holding!) The hags all have rings of spell storing with teleport, so they can escape. Joy. What a gimp. Why not just scream “DM PET! YOU CAN’T KILL THEM HA HA HA !” at the players instead? They both make the players feel the same way.