Brave the Labyrinth #1 – The Screams from Jedder’s Hole 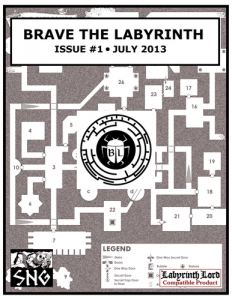 “That unholy wailing must be stopped. I sense a great evil lurking in the dark depths of Jedder’s Hole. I can lead you down along the secret paths, but if we falter, the price may be our immortal souls.” – Brother Helmad the Bold

This is a short five page adventure with twelve rooms, in a dungeon/former prison under a (reformed) temple of justice. It’s got some great imagery in it and is well worth whatever I ended up paying (PWYW.)

I’ve always had a hard time with Logos adventures. They are based around his maps and his maps tend to be a little small for my tastes. They are usually pretty well done, with some decent features and good use of elevation, but small. I’m more of a “family size bag of cheesy poofs” kind of adventure guy. But going into it knowing that it’s small helps a bit.

The conceit is this: Suddenly wailing has starts coming from a hole in the Temple of Justice. Bad King Dickhead used to chuck prisoners down there over a hundred years ago. The entire intro section is really well done, with some great advice for the hook. Introduce the temple over several sessions, and then, while visiting one day, the wailing starts up. Maybe in the middle of a ceremony the party is participating in. A wedding perhaps? The wailing, and hole in the floor it comes from, can cause those who really fail their saves to look down into it in horror and then, over 2-10 minutes, throw themselves in … That’s EXCELLENT. A wedding party interrupted, people transfixed in horror … and then the first one throws themselves in, just tipping over the edge! A mad scramble to prevent the others! That’s a good hook, a good set up, and a good effect that allows for great play opportunities.

The imagery in the adventure is well done. Skeletons of former prisoners on the other side of the only door in, having died trying to claw their way through the door. The sounds of bodies being ripped and rended and munched upon, coming from the distance and dark in front of the party as they descend into the hole … Most of the adventure provides these sorts of little bits of imagery that really work well to bring a scene to life in your mind, thereby leveraging the DMs imagination more effectively.

There are a smattering of potential allies in the hole, or enemies for the trigger happy. The magic treasure is quite nicely done. An Amulet of Blood with weird special effects, or a transformed skull that is now a CRystal Ball skull. That’s cool! More adventure should do that sort of thing.

This is a short review for a short adventure. While short is does have a decent amount of stuff going on, with more than enough stuff for the party to juggle in only twelve rooms.

The print version of the magazine is $4. The PDF version if Pay What You Want.
https://www.drivethrurpg.com/product/116433/Brave-the-Labyrinth–Issue-1-PDF?1892600