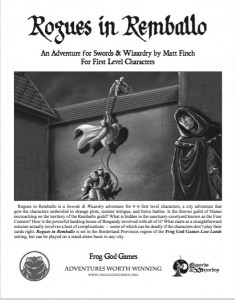 This is a little investigation adventure in a neighborhood of a city. I really like the neighborhood map, and the concept of city neighborhoods in general. It’s got a pretty decent pretext and the provides a solid foundation for a good adventure. The NPC’s could use more life and some of the descriptions could be more … specific? More applicable to the adventure, I think I mean. It does a great job of providing the party a solid starting base in the city, making contact with several organizations that can be springboards to future adventure. I’m inclined to like city adventures, and I like this one. I just wish it were a little more memorable.

Very superficially this adventure has a couple of aspects in common with Kelvin Greens “Forgive Us.” Both are set in a series of buildings that form a courtyard, with something Not Nice going on. I used to think that the local lords should keep close eyes out on all ruins, statues, etc nearby in the wilderness and/or destroy them and salt the earth, because of the prevalence of such sites causing problems. I think “courtyards” now need to follow on, and need to be outlawed by city ordinance.

In the neighborhood of Dead Fiddlers Square, something is up in the area known as Four Corners. The guard know something is up. The Thieves Guild knows something is up. But they don’t know what. Through a quirk of local law the guard can’t go there. The thieves guild has their own reason for being subtle, suspecting encroachment from a more violent guild in another city. One, or both, could hire the party to look into things. Plausible deniability and all of that. There is another subplot going on as well, with a missing member of a banking family. This is good. Three agencies, all with a bit of the story, some of which connects and some of which doesn’t. Three entry points to the adventure, with the other two laying open for potential additions and/or exploitation and/or complications. Environments are the most interesting when there’s lots going on. There’s a decent amount going on here. It IS all focused around the adventure … more on that later.

This is a stake out. An investigation. Questioning of locals. Figuring out what’s going on. Snooping into the the area … that could potentially then lead to some combat, a chase, paperwork found, prisoners questioned, and the end of the adventure. The read aloud here is terse, exactly the way it should be. The map of the neighborhood is excellent. Lots of variety in how high the buildings are, doors, windows, and alleys/streets. It provides an interesting environment in which the to have the adventure and to exploit in gaining access to the courtyard, once that time comes. I can’t emphasize this enough: the environment presented by the map supplements the adventure well. It’s exactly what it should in order to provide an interesting place from which to investigate the goings on in the area of interest.

I’m going to quibble with some of the choices later on, but I think I’d summarize the entire thing as a strong foundation to support an adventure. The bankers, in particular, get a decent overview write up which can serve well in the future. Key individuals, heir areas of interest and so on. The thieves guild and the city watch get less … a lot less. Essentially you get a name and some brief information related to the their goal in the adventure. It’s enough … but providing a brief write-up, as the bankers did, would have allowed for a much more interesting environment to be presented. Lieutenants, favored stooge, etc. You’re going to run into these people in the course of the adventure, and they serve double duty by providing an environment that lives on for future adventures in the city.

This same criticism could extend to the NPC’s provided for the various locations. Each of the locations in the neighborhood is detailed with a few sentences/a paragraph. Who lives there, what they do, and what they know about the goings on. Most of the NPC’s come off a little flat. Just a name and occupation, for the most part. A sentence on personality and maybe activity, or relationship to someone else, would have brought the area to life. “Weaves baskets on front stoop and glares at passerby’” or “Likes to clean veggies at the window while she gossips with the neighbor Mary, her confidant.” Something more than presented that provides a springboard for the DM to build upon.

Now for the hardcore criticism: the adventure is not organized as well as it could be. I understand that may be taken as a matter of opinion, but give me a moment to make my case.

The thieves guild knows something. The thieves on stakeout know something also. The guard know something. The guards on stakeout know something as well. Some of the people in the neighborhood know something, while some do not. The problem is that the adventure is organized into the usual Key/Encounter format. That format is great for exploration adventures. It usually serves some purpose in every adventure, to some degree. But it should not be the PRIMARY source of information in all cases. There needs to be an overview, or somesuch, that tells you watch the guard lookout knows. “They get a delivery of horsemeat from the Andersons every day at noon.” and stuff like that. Insead this is broken up to the individual keys. If you read all of the keys, and keep it all in your head or, more likely, make notes, then you’ll be able to present this information effectively. But do you really want to have to dig through all of the keys for this, especially during play? (No, which is why you’ve made a crib sheet.) This is not universal. It’s absolutely correct that the entry for the Andersons should contain the horsemeat entry, and that the potter key should contain what he knows. But the general information, the entry point for the adventure, needs to be outside of this. In the same way that some adventures present key NPC’s outside of their locations, some information should be presented outside of the keys as well.

I might also comment that the room/key format supports visiting all of the people in the neighborhood. And yet the DM is encouraged to NOT let that happen, because it can bog the adventure down. Finch is correct, it can, and usually will, bog the adventure down as the party questions each and every person, knocking on every door. And yet … this is how the information is presented … as if the party had done this. The guards, which lead you to the Andersons, which leads you to the house painter, and so on, would have been a much better way to present the information, at least in an overview. I appreciate the advice, it’s absolutely correct and shows solid understanding of how the adventure could devolve and how to combat it. More adventures should do that.

Overall a solid adventure that could be better. A timeline, more of a community orientation, more going on, and better data presentation could have bumped this up into stellar territory. As is, you’ll need to read and crib, as you do in most adventures. This one has a solid foundation though.

2 Responses to Rogues in Remballo