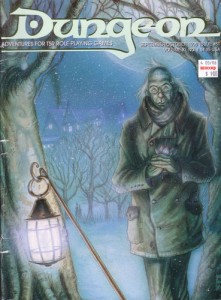 Eleven scenes, a couple of which are optional and a couple of which are just window dressing in which little/nothing happens. A woman makes a frankenstein and abandons it. She stumbles across it later, and it loves her. She’s already engaged, but the monster wants her to marry him. The party investigates, at her request, and guards her wedding. The scene 11 climax is at the honeymoon cottage. This is a ‘meh’ effort. The NPC’s are done well but everything, except the NPC’s, is buried in too much text. Combined with the scene based nature, it’s less than a stellar effort.

This is a pretty straightforward investigation and then assault, with a couple of high points. There’s a lame hook where the party finds a recently beheaded druid. Following up, they are assigned by a local city ruler to investigate some wizard deaths. This leads to them finding the Night Parade and then assaulting their warehouse base. There are some good NPC descriptions, terse and descriptive. “Fat, jovial, and with a face that scares small children.” The read-aloud is not excessive and has a nice over the top aspect to it. D&D is like old-timey theater; you need excessive makeup and exaggerated actions to get your point across. The rumors table is in the format I like, more of direct quotes from yokels rather than fact based. You get a fully city map as well as a VERY terse key, nothing more than a name. The investigation portion, and warehouse, vary between not-too-verbose and verbose, but it’s arranged well, if a bit conversational. This could be tighter than it is, but overall not a bad effort for a straight-forward adventure.

I shall not comment on the odiousness of the goody-goody implied morality in this adventure. A wounded druid asks you to travel to find an elder treant in a nearby forest so it can remove a curse on the druids own forest. The big treant is a dick and eventually helps. Unless you’re evil then he kills you outright. You travel to mountains to find some Pegasi, fight some griffins, and plant an acorn to heal the forest. Along the way you kill four shadows and a wraith. At the end a naga and 25 orcs show up. It’s a pretty straight-forward fetch-quest. The wandering table is a nice one with lots of nice little encounters on the three provided. It also takes up three whole pages, so it does so by providing a lot of text. But, still … it may be the highlight. I like classical adventure tropes, and I thought hard about this adventure. The odiousness of the background, goody-goody nature, and dick treant are real turn-offs to what otherwise could have been a nice little ‘magical wood’ adventure, a kind of Mirkwood & Lothlorein adventure. You could still do that, but you’ll not be inspired by this adventure.

A swamp village is plagued by swarms of insects; several villagers have died from it. It turns out that the local herbalist is actually a vampire who takes the form of a swarm of mosquitoes. Talk to villagers and get rumors, visit the herbalist, suffer through some dreams, get ambushed by the herbalists minions, chase him into the basement to kill him and rescue the villagers. The mosquito vampire and, maybe, the role play involved in convincing the villagers to dig up the graveyard (to find empty coffins filled with sand!) should be fun. The rest of this is pretty simple.