The Ogress of Anubis 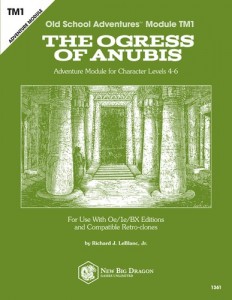 Azeneth believed the life of the high priest (or priestess) should be as comfortable as that of the kings and the gods. She spoke her contempt for her father’s “weakness” loudly and publicly, almost from the time she learned to talk. As she neared her teens, she made it known her plan was to supplant her father and become high priestess of the temple, sometimes claiming it was her place as the incarnation of the goddess Nekhbet. Many say Azeneth has the power to command serpents, and it was she who sent the asp that killed her father Kemosiri. Regardless, she seized her position as high priestess of the temple and set about her accumulation of power and wealth. Recently, children from the villages around the temple have begun to disappear. Rumors abound that Azeneth is sacrificing them and cannibalizing them because she believes this will make her wealthier, more powerful, and more divine. The people of the villages have begun to refer to Azeneth as the “ogress of Anubis”—believing it was Anubis himself that made this woman mad, and commanded her to consume the children she sacrifices. Someone must end this reign of fear and terror, and try to return the children alive—if it is in the will of the gods.

This is an egyptian themed adventure. It’s a raid on a temple compound to find some missing children. It’s more historically accurate than it is interesting. Or at least it looks historically accurate … since I don’t know nothing about Egypt. It’s interesting to review this so close to Valley of the Five Fires. The differences (dare I say improvement?) are quite interesting. It hits some of my pet peeves, and ultimately the goodies are few enough to make it uninteresting to me. Never let the truth get in the way of a good yarn …

The adventure does a few things very right. It presents the area around the temple, including the villages. Each village gets a sentence or two to let the DM build on. Pretty good. Better would be that there was also something interesting in each village. Maybe you can fix this by taking some of the “continue the adventure” hooks at the end of the adventure and working them in. The temple compound area is pretty nice also. Priests, guards, support staff and pilgrims will around. It’s very much presented as a locale that exists outside of the party … and then the party gets to dream up how they will get in. That’s very nice. It harkens back to the scene in 13th Warrior where they see the camp outside of the cave lair and talk about getting in. I wish more adventures would do this sort of thing. It’s always memorable when the designer doesn’t railroad you into something. There’s other little bits and pieces that also make this nice, like the parents of the missing children insisting on going with you (Fucking finally! You’d think no one in D&D-landia loved their children they way all =seem to usually avoid trying to help you rescue their kin.)

There’s A LOT of mundane magic items in this adventure. It seems like every guard has a +1 sword, a +1 bow and a +1 dagger. And it’s all boring. “they each have a +1 dagger.” Oh, my, that’s exciting. If the need is to give them a +1 to hit then just give them a +1 to hit. “They all pump iron, bro-style, every day. +1 hit & damage.” Don’t kill the mystery and wonder of the magical by making it mundane. In fact, the mundane treasures are are a lot better. Alabaster objects, gold blood bowls, and so on. Very nicely described.

The temple proper is pretty linear and, I suspect, very historically accurate. Historically Accurate does not mean fun. Some of the setups in it are nice, like cages full of screaming children, a sacrifice in progress, and reed baskets with skeleton children in them. The adventure needs more of that … although … even that seems to be missing some … joy? It’s all presented VERY fact based. I like things organized but the text must also inspire the DM and mundane facts are generally not the way to do it. I’m not talking gonzo, or explosion-sounds, but rather a dynamic writing style to bring the descriptions to life.

This isn’t a bad adventure so much as it’s not really a good one. I guess it’s serviceable, but mostly uninspiring.