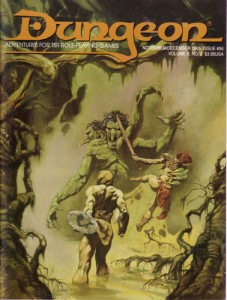 This long-winded Celtic affair details the retrieval of a helmet from wizards lair. Saving the chieftains nephew and getting your mission takes many pages of text, after which follows a short jaunt through a forest. A simple wizards hut leads to a hidden wizard lair. The hook/chieftain part is VERY long, because everything has to be explained through Celtic light. The forest and hut are fantasy-lite, containing hints of what’s possible but never quite going all the way. The actual wizard’s lair is the most interesting part of this. It has lots of weird wizardy stuff to play with, a nice random library book table, a lab making healing potions, and so on. The imagery is pretty bland, but the attempt is there. The main enemy is a dragon that has taken over the house. Confronting the dragon is not necessary. There are a variety of options presented for follow-ons to the adventure; what the dragon does if the party does X, Y, or Z, for example. I like this. It feels like a third act is provided, even if it is just referenced slightly. Similar to the old “this passage goes to a cave of your own devision” thing from earlier modules, but more concrete. I’m big on providing gentle shoves to the DM and this is exactly the sort of thing I’m looking for at the end of an adventure. Guidelines. Anyway, good wizard lair bordering on funhouse, needing some descriptive help with a decent ending. The beginning is nice & Celtic, if overwrought.

This is a nice low-key adventure with strong social elements. Hmmm, low-key is the wrong word. The party is not saving the world from evil necromancers. The situations feel real, and yet there is the element of the fantastic to the adventure. I like gonzo. I like funhouse. I also like folklore and the stuff that real people tend to do. This falls into the last category. A village is worried because their cattle have the foaming disease. No big deal, the cattle will get better, but the cattle having it means that the forest wolves will have it also, and it makes the wolves very aggressive. Thus the pretext is the wolf problem in the village. Both the cattle aspect to this and the wolf aspect make it a very real situation. “Yes, X is happening, and seems serious, but it’s not. It’s actually Y, the wolves.” This is augmented by some strong NPC descriptions in the village. Short but good, the NPC’s can add a lot to the play, and this is further augmented by a nice rumor table. The descriptions of the NPC personalities are evocative and terse and perfect for a DM to riff off of. A table of personalities would have been nice, but thats perhaps too much to be asking of Dungeon. To the “normal” aspect of the adventure (we’ll all Harn-like up until this point) is then added an albino elf riding on a blink dog, and the dog has been infected. Further, a temple is added which has unusual properties (and a goddess that takes no shit if you try and abuse the effects!) An albino elf riding a dog has a strong folklore vibe going on, and the temple shows that the writer, Ertman, understands how to keep a party under control. The adventure is a bit wordy, and could use some support material, but it’s overall very real and very human. Mass wolf attacks on a village, with the human drama of a few farmer thrown in, is not low-key at all.

I loathe these sorts of things. It’s one combat with some water monsters on a bridge/in a lake/stream/ruined keep. The party undertakes a mission for 1000gp. They are 5 or 6 10th level characters doing a delivery run for 1000 gp? It’s hard to be objective when the pretext is so lame. Combined with the awful “this happens because they are wearing an amulet of blah and then this happens because they are …” … IE: the adventure feels the need to explain EVERYTHING. It’s like some Rube Goldberg type thing in it’s complexity in order to get something trivial to happen.

Third verse same as the first. Just like the last one, this is a convoluted setup that involves a pitched battle with overly complicated plans. A quickling lures the party in to his home and then tries to capture them to feed to his giant spiders. It involves some of my favorite elements, such as: forcing the party to take a certain path by making the other path impossible to travel via DM fiat, a mushroom house with 18 different reason why the party can’t cut it or climb it or dig in it or do anything else they may want to do except go in the door like the DM wants them to, and a Drizzel Durden references. Fairies have an unfair reputation of being DM torture porn. This does nothing except annoy the characters for showing up that night to play.

Hrumpf. A linear adventure to chase a defiler. Get sent on a mission north to find new city states. Have a couple of encounters. Make a rep, maybe. Rep gets the attention of a bandit lord. Bandit lord wants you to pursue defiler. Defiler is in temple in the wastes, with a troll. End. I know Dark Sun treasure is sparse, but it’s REALLY sparse in this. Trade caravans with nothing in them? Not on purpose, like it’s a fake caravan, but rather no details at all. At first this seemed like a great way to expand a campaign to the north to find more city states, but after the entire thing goes down it’s just another Also Ran. There’s nothing in this of substance. Just some encounters, loosely connected. Boring Dark Sun, who wouda a thunk it?

A jungle adventure out of Fort Thunder. An important mans son has gone missing after searching for a golden idol in a lost city and you’re sent to bring him back. There are unfriendly headhunters and friendly pygmies along the way. The ruined city hosts an evil tribe. There are some large pitched battles in this, and an opportunity for stealth/a planned assault at the city ruins, both of which are very good elements. The imagery is hit & miss, with skulls piled around altars and corpses in trees being high points. It’s really wordy, but opened ended in a way that’s quite nice. I like the idea, but the implementation is not the greatest.