DCC #87 – Against the Atomic Overlord 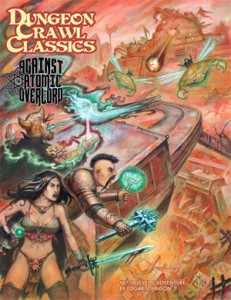 For a thousand years Mezar-Kul has known only war, and now the Overlord reigns supreme. From his gargantuan metal fortress he rules the blasted remains of the planet’s last city. Hope seems lost – until visitors arrive from a distant world, bringing uncanny, magical powers. Your adventurers must pick a path through twisted ruins, ancient missile silos, strange monorail systems, and a conflict with four deadly factions to save a world – or destroy it!

This is a frustrating sandbox adventure set on another planet, with mostly technology/Gamma World theming. In a ruined city, with faction, the party is asked to seek out The Great Egg and use it against The Overlord. It is presented in some confusing style that is part sandbox and part linear. There’s something here, but it’s poorly organized … some maddingly generic-but-specific thing going on. My head hurts.

The party is transported to the ruined planet. The pretexts given are all pretty light. “They find a spaceship,” or “A book transports them.” While I’m sure that, yes, one of those things can/could happen, they are quite generic. For example “The party finds a device capable of transporting them to Mezar-Kul.” Well, yes, true. But really very interesting, is it?

That same sort of thing happens time & time again in the adventure. Very specific read-aloud for rooms the party is likely to never encounter, combined with generic imagery and prose. “Itai promises rich rewards from the Spider Goddess.” Well … While perhaps factually true it’s not very interesting for the DM. That last bit is supposed to be the main motivation for the party. It’s not very inspiring, for the DM, is it? From that you need to create some rich rewards for the party.

That little bit is from when the party meets the leader of the first of four factions in their area. When the party arrives on planet they are immediately attacked by The Overlords troops. (Faction: Evil Bad Guys.) This first faction, their arrival having been foretold, comes to the parties rescue, and escorts them to their leader whereupon they get their mission, Along the way are a couple of more Overlord attacks. The party isn’t forced to ally/accompany with the first faction, but it’s what most groups would probably do.More on this “sandbox but not” nature later.

The first factions base is weirdly described. The various rooms get, essentially, two descriptions: one if you came willingly and one if the group is invading. This sort of weirdly specific read-aloud/descriptions is present in many areas. It’s as if the adventure can’t decide what it wants to be: a sandbox or linear. The best possible reading is that a headquarters is presented for each of the factions, along with some descriptions of their mini-bases. The problem with this is the weirdly specific text, combined with the overall genericness. It’s like the emphasis of the development was given to the wrong areas.

The four factions are well-detailed in their motivations, goals, and how they react to the party and each other. It is a little repetitive, but the information on the factions is very good, even if the “bases” are ignored. They feel distinct and the information is more than enough to mox things up a bit with the players and work on an ad-hoc basis.

The adventure doesn’t tie itself together very well, or present much additional data beyond the linear path assumed to be taken. The “reward” section above is a good example. The directive for detonating the egg (the Mcguffin) , and controlling its energies, while key to the adventure, doesn’t seem to come out anywhere. Nor does the reaction between the first faction and the faction that has the egg. It’s almost like someone assumed that there would be an additional section of data/background provided, but it was never completed/included. You can kinda figure out what the plan was, but …

In addition, going off script doesn’t get much support. Yes, you can strike off on your own and there IS an encounter table, but it’s more of the same very high level generic stuff. Some additional flavor regarding faction encounters, or the like, would have been a welcome addition to the wandering tables.

This is a frustrating adventure. You can kind of figure out what is supposed to go on, but it clearly could have organized better. There’s also a distinct lack of relevant color & flavor. The bush gets described (your mileage may vary on the quality of the description) but the core elements gets abstracted in to boring facts. I like facts. I also like color. Two great tastes that go great together. But not here.

2 Responses to DCC #87 – Against the Atomic Overlord