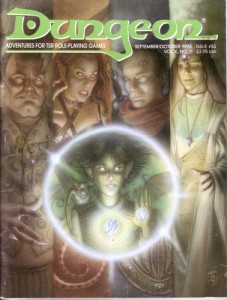 “I wore an onion on my belt; it was the style at the time.”
Also: I love it when the party has the option to talk to/work with “evil” monsters. One of the adventures in this issue has this.

Nine pages that feel like twenty. The booking agent at a bard academy hires the party to search for a missing mistral. The party meet a friendly monster in the woods. If they party doesn’t believe the monster then some goblins attack so the DM can get the party to trust the monster. The monster ambushes the party at night while sleeping in camp. Then it and it’s mate ambush the party the next morning while the group searches for the lair. In the lair (one room) are three monster cubs. Adventure over. There’s a useless performance roll to be made by any bards while interviewing with the booking agent; the results are meaningless. There’s a morality problem when the cubs are discovered: kill them or not? The old “eat a regenerating troll” trick comes up as the monsters keep a dead body with a ring of regen on it, feeding each day. Perhaps the only good thing about this adventure is the advice at the end to give an XP bonus if the party finds some interesting way of dealing with the morality problem of the cubs. This doesn’t punish the party for killing the cubs but rather rewards them if they think of something else to do. Plus, there’s a possibility for monster pets/companions; not enough adventures do that. Really, an ambush at night and one during the day. Nine pages. I’m not sure but that may be a record for Dungeon.

This is an urban adventure in Sigil with factions and a hefty amount of social elements. It’s also nearly completely linear. It’s also got a lot of charm and could be converted, relatively easily to almost any urban game, from “big fantasy city” to Cyberpunk and Shadowrun. It has a couple of places where it’s not assumed that the players succeeded in the last portion, it’s got some decent “trap hints” in placing burned bodies in front of a trapped door. It’s got multiple options to take sides of one faction against of another. It’s got charm out the ass, from the demon/human-flesh restaurant to a dozen other throw-away comments that do wonders to add depth and realism to the adventure. If you took this, and six or so other good linear planescape adventures, and ran them all at the same time then you’d have something very interesting adventure with the appearance of free will. If there were a place for a linear adventure in my life then this one would be a strong candidate. Wordy, as is the style at the time. CUtting it down with a good edit, without loosing the charm, would be a worthwhile endeavor and generate a great game to run at a con.

There is some middle ground between comedy and straight. Farce-maybe? This should be a farce, but instead it’s straight, with no blackness at all. Someone has stolen three tulip bulbs worth 100,000gp. You’re paid 150 gp to go get them back. You look in to things art the estate, track the bandits through a forest, and then assault a keep. The bad guy has a hunchback. The adventure is laid out around the usual keyed encounters, but is more of an investigation or assault. Embedding detailed plans and NPC personalities and reaction in a keyed room like “Stable” is not an effective way to lay out an adventure like this.There are hints of farce in this, but it’s not nearly enough to make it worthwhile, even if it were not laid out like shit.

MURDER! This shipboard murder mystery has a decidedly 1850’s flavor; the refined folk, and all that. But, there’s a werewolf killing people on a ship. And the wolf has a twin sister that is hiding her. But the twin doesn’t know she’s a werewolf. But the twin does know she’s a psycho killer (Qu’est-ce que c’est.) The usual spells are gimped to prevent a first act detect evil. [D&D spells are aligned to a certain style of play. Want a different style of play? You need a different spell list.] The keyed encounters are done pretty well for something like this. Brief to the point of having 24 to a page. A little more flavor might be nice, but they correctly do not take center stage and the adventure is not laid out around them. The emphasis is instead on the events, which is where it should be. Unfortunatly … it almost completely ignores the NPC’s; they get only slight mentions in the various events. This is a hard core social adventure and the social is given the shaft. The events are also a little … predictable? In most adventures when the DM reads boxed text then you draw weapons and prepare to kill any NPC’s with you, whilewatch the woodline/corridors/ceilings. In this adventure when the DM reads text then someone IMPORTANT is about to happen. There ar no events that are not IMPORTANT, which derails the mystery aspect. In theend, the werewolf attacks the party after the third scene. Everything the party did for naught … it’s really just a linear suckfest. That’s sad. The Masque setting is interesting a shipboard murder is a staple of the field. The setup with the twins is suitably byzantine. The form it all takes just ends up sucking.