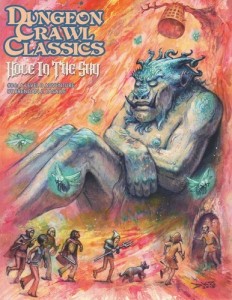 The Lady in Blue, a mysterious figure of cosmic power, enlists a band of simple peasants for a strange task. They are to follow an invisible bridge until they arrive at a hole in the sky – and then jump through. Death awaits all but the bravest, strongest, and luckiest, but the Lady offers a reward beyond all the riches of the world: the chance to change the very stars these peasants were born under, and thus change their destiny.

Let’s get this out of the way. I like this adventure. It’s linear. It can be arbitrary. It’s also got a strong appeal to folklore, and I’m sure that’s why I like it. It feels like a tale from The Turnip Princess. And I like turnips. And princesses.

Your mob is contacted by an entity and asked to free an ally from a prison. You journey over an invisible bridge, into a bramble tower, and up a ladder, over a sleeping titan, to free someone in a birdcage. You can already see the strong appeal to folklore: the bramble tower, the birdcage, and the sleeping giant.

The hook here is “each of you knows you live a life you are not supposed to, and are haunted by dreams of someone telling you they can help you become your true self”, or something to that effect. A little different than the usual mob hook, but fine. What’s very interesting to me is the mood set by the introduction. It paints a picture and sets the mood perfectly. Frankly , the read-aloud is lame, but the words AROUND it, for the DM, are quite descriptive and evocative. Crazed, haggard, driven to find the cliff from their dreams. It’s a nice little bit and I’m sure inspired enough for the DM to communicate the vibe to the players.

Speaking of read-aloud …There’s too fucking much. The start has none paragraphs, some of which are quite long. In total about ¾ of a page. Bits and pieces are good: the Blue lady entity holds two severed in one hand and three in another and THOSE are what do the talking, simultaneously. Again, this seems to be an appeal to some ancient folklore, although what I don’t know. The various Perseus imagery come to mind, but it seems like something else also. In any event the entire start is quite … lyrical? Classical? A feast! Which includes some maggoty food as well, while a mythic entity talks to you and provides fantastic instructions, from stepping off of cliffs to blindly jumping in to holes in the sky. This same feeling continues through the rest of the encounters on the way to the bramble tower. The bramble tower has the party entering through a crack under the door, unable to open the door proper, and then a slumbering giant of monstrous size and countenance. High above is a birdcage … This stuff all SCREAMS folklore and should appeal to any player. In fact, I think it changes the player’s mindset. I think the folklore elements get the players out of their AD&D head and into a more make-believe mindset. That’s one of the reasons I like folklore elements so much.

The inside of the tower has an arbitrary element. There’s a monster that attack the party and eats people, and then retreats. It’s powerful. It attacks at several places in the tower, explicitly, and advice is given for it to attack more. It certainly drives the party forward; there can be little stalling for fear it will get another person. From this standpoint it’s a nice element. But I can’t help thinking it’s a little arbitrary. “Someone dies when you enter the tower.” or “Someone dies while you climb the ladder.” The impact of the monster is good. You DO get at least one round to save the person before they go into the flaming maw of a mouth, and then perhaps a round or two more as the creature retreats. Maybe something like “Tendrils are AC 15 and 5 HP?” That seems silly to have to say. I don’t know, maybe my own personal feelings while reading that section.

The adventure is almost completely linear, from start to finish. I love the encounter locations, but it’s still linear. Once again DCC earns it’s “Convention Game” reputation … as well as earning it’s “Best Fucking Games Ever” reputation. Someday someone will learn how to marry non-linear elements … a day of days to be sure.

The adventure also has one of my new favorite art pieces. The title page shows a tall bush, with a door in it. A little line of villagers walk towards it. Mixed in among the trowels and pitchforks is a haggered maid with an iron skillet. This image communicates my favorite thing about D&D: the common man going down into the hole in the ground; better to take a chance with the unknown and encounter the fantastic than face the mundanity of existence. Close to home, maybe?

The strong folklore elements bring this one home for me. It’s overly wordy in many places, including the read-aloud. But when it’s good it’s VERY VERY good.

This entry was posted in Level 0, No Regerts, Reviews. Bookmark the permalink.