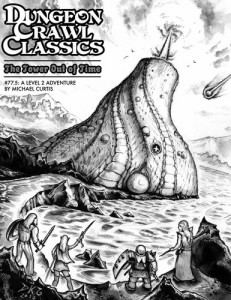 From out of the past comes an ancient evil to plague the present! A mystifying tower crowned by a blinding blood-red light has appeared in the forest, arriving as a never-before-seen comet burns in the sky above. Is its arrival a harbinger of terrible times ahead? Only those heroes brave enough to confront what lurks behind the inexplicable walls of the Pharos of Scales can solve the mystery of the tower’s puzzling arrival!

This is a straightforward and pretty linear adventure, exploring a simple tower layout. There’s only so much you can do with a simple tower map. Tower of the Stargazer probably did the best, at least with regards to the map. This adventure attempts to present a wizards tower, from the earliest primordial days of creation. Created by the strange serpent folks of that time, it travels through time in order to arrive at the destination in time in which the master of the tower will arrive back from the stars. (IE: the comet is his ship.)

As such the adventure is trying to create kind of primordial experience, to immerse them in this otherworldliness that existed before the modern DCC era. It starts well enough. A fetid steaming lake of prehistoric origin that has appeared in the forest where no lake should be. A weird tower, twisting up, asymmetrical, with a slumped melted look with its construction seeming to be more related to leather than stone & mortar. Semi-opaque membranes cover certain areas … windows and a door? To get in you must press through a semipermeable membrane that settles for a door. Or slice through it and watch it repair itself. Inside in a kind of arboretum, the air rich & thick, a riot of vibrant green, with some burbling and slurping pool, creating bubbles rising to the fleshy ceiling overhead.

There are a decent number of rooms like this: well described with more than the usual amount of weird flavor present. Ape-things with pulsating fleshy mounds on the back of their necks, humanoids hooked up to bubbling and gurgling tubes to power ancient devices. And there are some stinkers mixed in like “a number of barrels and small boxes stand against the wall”, as well as some, oh, lets say the descriptions of some of the inhabitants, like giant trilobites, antehumans, and green splitters could use some serious work. There are only eight rooms here, and only a couple of magic items, which are, frankly, not that strong. A vial full of a greasy liquid? Eh. It’s got a nice effect anyway.

On another front, I think I have some insight in to ONE of the reasons why I tend to like the Stroh (and sometimes Bittman) adventures more than the Curtis & JoeG ones. It’s the use of the archaic forms of adjectives & adverbs. I’m probably mixing some truth with legend here, but I get the sense that in the time before time, language was a bit looser. For convenience I’ll refer to the tipping point as Samuel Johnson’s Dictionary. A words and structure/grammar became more defined we someone became slaves to the rules. Witness the “Weirdling sun” in Stroh vs the “melted look” of Curtis. To take a hypothetical example: we want to convey the image of an woman floating over the ground. How do we describe this? Does she “float” over the ground? Yes, but that’s boring. We want something more. Something ethereal, unearthly, gossamer, empyrean. How about “shimmer” instead? Better, but not great. Which is why I write reviews instead of adventures. 🙂 Anyway, this more fanciful and archaic language, both in structure and in word choice, communicates the visual image so much more strongly. And that’s what we’re looking for in an adventure: something that can strongly and solidly communicate the author’s vision to the reader.

This is short. It’s an ok but straightforward adventure. Certainly better than most published, but does not reach my lofty platonic idealism.