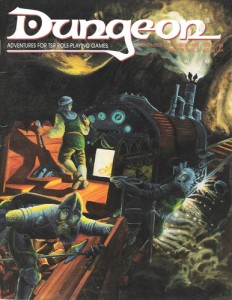 This is a city adventure that is clearly on the right path. Essentially, the city catches on fire during a catastrophe and the adventure follows the characters over the next three or four weeks. The fires here are just a backdrop to the other action taking place. What you get are some brief descriptions of some notable places in the city and some idea of what happens to them over a month, and then a series of events over the next month that the party can take part in. Looters, food riots, and so on. There is a little advice on how to get things going and maintain them, some general tools such as a quite nice rumor table, and then … you’re off! as such this is more like a sandbox setting. One of the most successful campaigns I ever ran was a city game. The lessons I learned from that campaign are present in this adventure, although implicitly. EVERYTHING is a hook. Everyone you meet, every interaction you have will cause something else to happen. Free someone trapped under a cart? He was once an important person in the city army. Don’t do X, then Y happens. This entire adventure is a springboard to adventure. The burning city, and its aftermath, can provide the backdrop and kickoff to a wonderful campaign centered around the city. You’re going to have to put some work in, obviously, to fill in the details of what happens, but you would expect that. In this way the adventure reminds me of one of my favorites, and one of the best done ever: Welcome to Mortistown. This was a modern-day zombie setting. It described the scene, the people, some of the important places, and gave a timeline of what would happen. The zombies are the pretext, just as the fire is in this. This would be a great adventure to kick off a campaign or make a major part of an ongoing game. There’s a sense that this place is ALIVE. City games take a lot of work & record keeping, so don’t tread lightly, but the sense of context and connections the characters make will cause the work to pay off in great play experiences.

The Hand of Al-Djamal
by Stephen J. Smith
D&D
Levels 9-12

I loathe this shit. Twelfth level characters investigating the murder of a night watchman in a museum. A magical security company that guards all of the artifacts against theft. The curator has powerful friends who will retaliate if the party gets handy with him. If the party does steal some stuff then the advice given is to make it very hard for them to find a fence that deals in museum-grade items. In Glantri. Run my stupid ill-conceived set up EXACTLY the way I want you to … OR ELSE! Somethings gotta give here, or should have anyway. Either don’t make it a high-level adventure or don’t make it “investigating the murder of a night watchman.” What’s the problem? Fucking magical ren-faire shit.

Pro Tip: If your adventure requires 3 ½ pages of text to describe one encounter then you know you’ve done something wrong. Tribesman are raiding trade routes and the party is hired to stop it. The island they live on has a peaceful settlement. They indicate that the evil-doers are to the south. There’s a small fight with an outpost of human slaves and gith, and then a small 8 room/2-level tower. Inside you find some more slaves, more gith, and a giant brain in a jar that takes 3.5 pages to describe. This adventure has nothing to recommend it, being straightforward and “normal” … which is really saying something since it’s a Dark Sun adventure. Talk about humans with pointy ears … this is the Dark equivalent of that.

This is a disappointing effort and a forced idea. A bajaillion pages of backstory, introduction, and notes tell the tale of a dwarven steam railroad in operation. The last two trains to a certain city have disappeared; the party is hired to guard the next one. Some random encounters might happen, and then the train passes through an illusion wall and is attached by a large force of derro and duergar. A large enough force that Battlesystem, etc is recommended to be used to resolve the battle. There’s both a small derro lair and a small duergar lair to then explore. This thing has a GREAT rumor table (birther dwarves? I didn’t know FOX also reached the D&D dwarves …) for a tavern you encounter right before the ambush. It also has some pretty ok room descriptions for the lair rooms. Nothing super-fab but a cut above the usual by providing game-able content for a number of the rooms. A guardroom with jars of white chalk, for invisible intruders, for example. Simple, terse, game-able. The enemies are well-described with personalities, etc, but that will never be used because you’re just going to butcher them mindlessly in the opening battle. I guess maybe you could parley with one or two during the battle, or during a chase. The ENDLESS amounts of text given to the railroad, it’s repair and operation, are the real problem here. It’s just window dressing that has no real impact on the adventure other than maybe a logistical challenge or random monster attack. But that’s like saying you’re going to run an adventure using a modern Amtrak journey. Uh, ok, we’re delayed by a freight train. Uh, ok, we’re delayed by an engine breakdown. Wow, that’s exciting … The actual train plays very little role here, in spite of the enormous amount of space given to describing it.