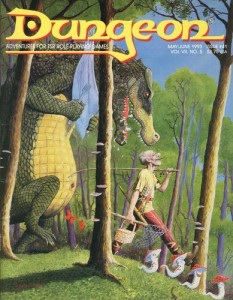 Remember folks: I’m partial to fairy tales, so read the last review with that in mind.

Elaborate Funhouse. A wizard has built himself a tomb, buried himself in it, died, and then invited you to explore/plunder it. This contains one of my favorite design elements ever: the tomb builder cast multiple wishes so detection spells and teleport-ish spells would not work. Maybe … youdidn’t mean to write a level 10+ adventure? Maybe you meant to write a level 5 adventure, before adventurers get those abilities in quantity? Maybe? No? You’re just a sucky DM who imposes rules arbitrarily on the players in order to force them to suffer through your ‘adventure?’ Ok, just clearing that up. Longtime readers may recall my frequent references to the Technocracy in the Mage rpg, or also my use of the lyric “I touch roses.” An attempt to explain a mystery, by definition, destroys the mystery. Imagination & wonder resist definition by their very nature. But that didn’t stop Cody. He’s desgined a tomb under the assumption that the only valid way to do something in D&D is what is published in the rules. The first room is an elaborate trap that sprinkles some beans, from a bag of beans, with water. This include soil in the room, the buried beans, and a giant cauldron with holes in it to act as a watering can, and the adventurers dumping water i to it when they open the manhole cover at the bottom of a well. That’s some serious Rube Goldberging just to get some magical shit to happen in the room. I’m gonna confess: this is the first dungeon EVER that I could not get through. I could only read about half of it before I just couldn’t take it anymore.

I don’t usually review side-treks, but this one has a decent idea. There’s a wishing well that grants ill-luck to those who loot it. A thief did, and died nearby after a comedic accident. His ghost wants you to return the stolen loot to the well so his soul can be freed. That’s it. Nice premise, but there’s no climax/payoff. “Uh, ok. *plop plop plop*. Done!” I REALLY like the idea of the setup but it needs some kind of zany complication, or any complication for that matter.

Uh, fight some kobolds for a book? I actually went back to look at the cover and editors introduction to make sure tat this issue wasn’t the April 1st edition. Meet a gnome who’s writing a book about the divergence of dwarfish & gnomish poetry. He’s gnome-like (IE: odious) Meet the bard/woman who stole the book the gnome needs to complete his own book. She’s weepy. Get fucked over by vampire moss and cross in a river, then fight some kobolds who shout love poetry from the book, thinking they are magic spells, and throw sand packets at the party ala LARPing. “Lightning Bolt! Lightning Bolt!” except it’s “Feel my wrath like a scalding bath!” or Homicide?! Foul brutish beast!.” IE: it’s a comedy adventure. Those are hard to pull off. I find the gnome shit odious, in general, and surprisingly enough I find it odious in this adventure. The weepy bard girl is kind could be fun, just like the Romantic tavern-wench in issue #40 was. Kobolds shouting love poetry seems like something for a level-5 party encountering a kobold band. I hold a special loathing in my heart for the crocodile encounter. They look like logs and the party is encouraged to cross the river by jumping on them. If they party is not morons and look at the logs the DM’s instrctions imply that he should say “its really a log”, because the first of the three “logs” IS , actually, a log, with the other two being crocs. That BS. That’s killer asshole DM shit. If the party asks you tell them. You don’t play 20 questions. You don’t make them guess the EXACTLY correct words to use to get the right answer. That sends a bad message, not only about play style but about the dickishness and adversarial nature of the DM. Bullshit I Say! Bullshit.

Exploring a derelict Spelljammer ship. (Are ALL Spelljammer adventures exploring a derelict ship?) This adventure is only 9 pages long for 21-ish encounter descriptions, which makes it one of the tersest Dungeon adventures ever published, especially after the endless backstory is ignored. You explore the derelict ship, get some hit & run undead tactics from some spectre-like undead, and fight some skeletons they’ve animated. It’s not a particularly good adventure, but then again it’s not particularly poorly written either. I’d give it a solid C-, with little to recommend it … which will in turn place it on the short list of “Best Dungeon Adventures Ever.” Seriously, it’s not AWESOME, and my standard is AWESOME, but if you just wanted a nice little thing to insert in a Spelljammer game then I’d reccomend this to you. It doesn’t activly offend, it’s just not very interesting.

A good idea poorly executed. The local temple has folks in town stirred up and on Halloween the local thieves guild takes advantage by dressing up as demons and openly ransacking people’s homes. The party track them back to their headquarters and deals with them. I’ve been partial to the Raiders in Town trope for awhile now, and it picked up during Hoard of the Dragon Queen. This one is done OK, but its pretty clear that the raiders are NOT demons, almost immediately. The clues are also pretty blatant as to what is going on and where the headquarters are. Finally, there’s a group of paladins running around chasing them. Pompous, of course, and they don’t seem to realize that they are thieves and not actually demons. This thing also comes in at 20-ish pages long, FAR longer than it needs to be. The thieves all have multi-paragraphdescriptions, almost none of which will never come up in play. You now know enough about their adventure to run your own better than the one written in the magazine.

This is presented as a joke adventure, but I would instead say that it’s charming … or portions of it are anyway. An old swamp hermit is being annoyed by singing mushrooms. They are actually saving his life from giant mosquitoes but he doesn’t know that. The mosquitoes are being controlled by a child-like bog monster deep in the swamps. The hermit offers the use of his boat to explore/figure out whats going on … but the boat is actually a tame mimic, unknown to everyone. The singing mushrooms and the boat/mimic (which essentially just means the boat can act a bit on its own to liven things up and freak the players out) are the jokey parts. I guess the hermit falls in to this category also, as he talks about assassins/hitmen, etc. Anyway, most of the adventure is straightforward. The problem with this is that it did’t go far enough. The WIll o’ Wisp should have been written as a very spooky encounter, and the other encounters tending toward the kind of charming fairy tale feel. They tend to be a bit mundane, unfortunately. There’s certainly some room for run & interesting play with the mushrooms, the hermit, his giant cat, and the boat … but the rest of the adventure feels much more mundane and of a different tone than these first four elements. That’s unfortunate.