DCC #80 – Intrigue at the Court of Chaos 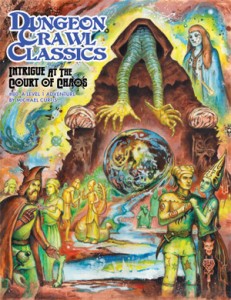 At the mercy of Chaos! Abducted by the Court of Chaos, the adventurers face hard choices if they want to return home. The Host of Chaos desires a legendary artifact held by the Scions of Law and need patsies to retrieve it. Faced with an eternity of servitude, the party must sneak into the Plane of Law and steal the Yokeless Egg from under its guardians’ watch. But not all is what it appears when the Court of Chaos is concerned and serving the Host may destroy the party from within. Can they survive the Intrigue At the Court of Chaos?

This adventure tackles some hard gameplay subjects and does so well-enough that I consider it a keeper. Intra-party conflict is hard, but it’s pulled off well here. The party treats with powerful forces; again done well-enough. It has a kind of “proving grounds” dungeon behind it … usually something I loathe but it fits in ok here. Finally. it also deals with planer adventure to the “good” locales, which it misses the mark with. It’s wordy, especially with read-aloud, and the freakishness usually present in DCC is not to the degree I’d like to see it. Then again, I don’t ANYONE has ever done a good adventure on the planes of Law.

Your level-1 party is summoned to the Courts of Chaos. They have a mission for you: grab a spark of chaos from where it’s being held on the planes of Law. After some intrigue in the Court of Chaos you go to the Planes of Law, solve a few puzzle rooms, and head back to the Courts with the fallout of deals made, or not made, earlier.

The Court of Chaos is done pretty well. The Lords of Chaos are sufficiently freaky, but the bystanders in the court could use a little more work to communicate their freaky nature. Chaos & Misshapen are generally as well as the descriptions go for the “commoners” of the Court. It was a pretty good opportunity to throw in some delegations ala Flash Gordon Ming Throne Room. After the party gets the mission described the fun begins. They have to decide if they’ll go on the mission, and get a private suite to do so in. During this time one of the Lords of Chaos appears to each party member and offers them special rewards if, when they come back, they give the egg/chaos to THEM instead of the entire Court. There’s a whole section on advice for the various Lords and how to run this. It includes the class “take each player out of the room separately” DM technique, as well as the advice that you should take the LEAST trustworthy player out and just have a talk with them; don’t offer them anything. The way the players interact with each other after they have all been out should be DELICIOUS, especially for the poor untrustworthy player. “No, really, no one offered me anything!” Thus the seeds of mistrust are sown for the rest of the adventure. This is the best kind of motivation; it motivates and manipulates the PLAYERS as well as the characters. Intra-party conflict is usually a terrible thing. It’s one of those few things that most DM’s come down HARD on. It’s taken head-on in this adventure, and I think it’s done very well. You’re just level-1, so there’s not as much investure. Further, it’s the Courts of Chaos; OF COURSE it’s going to happen. It’s in your face, and yet … the betrayal, if it comes, probably doesn’t happen till the very end. The potential betrayal is right in EVERYONES face, right at the start, not a sudden knife-turn out of nowhere with no particular motivations beyond “I’m evil.” or the dreaded worst phrase in RPGing “thats what my character would do.” As the adventure points out: everyone has the entire adventure to both fret and to prepare.

The ability of DCC to confront these tropes in fresh ways os one of the best aspects of its published adventures. At level-1 you’re treating with the Lords of Chaos. That’s not something other systems tend to take on. (Again, this is pointed out explicitly in the introduction, but I, being far wiser than your average bear, have noticed it previously.) At the end you get a boon from the Lords of Chaos. How cool is that? These are the things that make your character stand out and that make campaigns memorable.

The adventure is one of those “proving grounds” things. You do room 1, then 2, then 3. I hate those. Yes, it makes sense sometimes, and it does here as well, so I’m giving it a SLIGHT pass … but it feels so … I don’t know. Lazy & railroady are not the right words. Maybe Done to Death? Each room in the main location on the Planes of Law is a little puzzle-thing. Prove you’re a servant of Law by X, then Y, then Z. Sometimes you get to combat if you fail. This is where the wordiness of the adventure gets to you. The text in the adventure up to this point, while long, isn’t really needed during play. You get the idea of what’s going on and the tone and how to run it and you don’t really need to refer to it during play. But the “test” rooms are things you need to reference during play. The real-aloud tends to be longish and the rooms are puzzle-things, so there’s a decent amount of text. This could use some work.

They are not particularly evocative rooms either. Adventures on the planes of Law iis something that I don’t think anyone has mastered yet in an adventure. Celestial Ox, crystal humanoids, angles and blinding light. None of it is very interesting. I guess our fertile imaginations dwell much more in the nether regions while the good remains unknowable in our psyche?

It’s all generally straight-forward. The puzzle-room aspect is something I like, but I generally like it when it’s NOT an explicit puzzle-room adventure. The descriptions and so on are generally just ok. A cut-above the usually but no to the usually DCC level. The core premise though is WONDERFUL. The intrigue and the Court of Chaos start strong and the impact resonates through the erst of the adventure, touching everything. THAT’S what makes this a GREAT adventure. Treating with Chaos gods at level-1, and the fun that ensues …

Intra-party conflict may not be your thing. It’s not my thing. But this adventure is the exception to the rule.

5 Responses to DCC #80 – Intrigue at the Court of Chaos