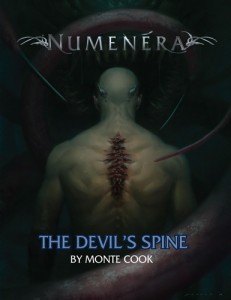 It begins simply enough. Doesn’t it always? A nobleman’s estate needs tending in his absence. But what secrets lurk in its shadows? What deals has this man made with whispered voices in that darkness? And once such a discovery is made, can it be undone?
Mechanistic and dull, this adventure is overly specific in areas that will only slightly impact the gameplay and far far too minimal in actual game-able contact. The result is a ham-handed set up with mountains of text about things are that are only slightly relevant with game-able content almost an after-thought. There are actually four adventures/episodes in this booklet. Adventure 1 is the get infected/hook. Adventure 2 is “wipe out giant virus hive mind”. Adventure 3 is “loot the trapped tomb” and adventure 4 is “under the sea castle explore.”

I LUV Gamma World and want to have millions & millions of its babies. I have only slightly less love for every other post-apoc game every written, up to and including Morrow Project. It will always be my first love. And just like Erica, from high school 30 hears ago, it shall remain unfulfilled. The trappings are here in the art, and in the various found objects and the environments. Most of it, though, lacks soul. It’s presented without the love that a dreamer would have. Short, punchy descriptions that fire your imagination … are seldom found. Instead we get history and backstory and details layered on detail of things that won’t matter. Assumptions have been made by the writer but not communicated, although you can kind of see them sideways in the implicit choices made in what do describe and how. Sure, the party doesn’t HAVE to do X, but all of the writing is focused that way. But the up front doesn’t present it in that manner. There are 3 main interstates between Indy & DC. Let me explain in detail the third and most non-obvious one …. but you see, it’s not explicitly presented that way. Maddenning and frustrating.
Baron von Butthump finds a horrid creature under his house and makes an obscene deal with it. Then he goes away with his trusted servants and hires some strangers (the party) to look after his house. Uh … ok “Hey, don’t go in the basement; my secret alter to Mamon and doomsday device I’m planning on taking over the world with is down there. Back in a month! Have fun in the pool … and don’t forget to water the plants!” Improbable setup leads to the party finding the secret basement and … getting infected with spine parasites that will kill them in 3 months! Yeah you! Mommy parasite will remove them for you, but you need to go on three quests for her to do it. Two to get the surgery tools and one strictly for her. The whole “if you bring me the tools then I’ll do it for you, and in return I want you to do Y” is pretty ok with me. What’s not ok is the transparent set up. If my DM pulled this shit on me I’m sure I would not come back, unless it were a friend and even then I can’t see anyone I game with not groaning. “Ok, ok, you want us to go on the fucking adventure. I got it. And you ‘persuaded” us by infecting us with a lethal disease. How about our characters just die and we start new ones?” The BEST hooks motivate the PLAYERS, not the characters. 5 minutes after character creation you have a disease that will kill you in three months? Ok, I roll up a new character, Traveller style.

This reminds me of another major major flaw: the railroading. Not in the traditional sense of do A, then B, then C. There’s some of that in this adventure but I’m instead referring to how the NPC’s interact with the party. EVERYONE has motivation which is mighty convenient. The naga thing has a bunch of eggs and the party gets infected with them. She’s super-worried about them, and thus struck the deal with Baron von Butthump to feed people to her/them. Super protective. But also doesn’t give a shit about the them and is willing to remove the parasites, her children, form the characters. This is explicitly said in the adventure. Her motivations are exactly what they need to be to force the adventure a certain way. Likewise there’s a lot of “they always attack everyone until dead” motivations, and super-powerful creatures who love talking to the players. The entire thing is just one big set-up, a play within a play for the benefit of manipulating the characters in to the adventure the writer THINKS they should have.

The writing is dull and uninspired. There’s no verve or zest in the descriptions. Mechanistic and going through the motions. It stands in great contract to the imagery invoked in Manor of the Black Manse. Short, punchy, vivid. Instead there’s lots of repeat text. The entire thing strikes me as some cross between the Similarion and “let me tell you about the adventure I ran last week …” It’s conversational. It’s full of dull things. It’s not focused on the one thing it NEEDS to be: a tool to help the DM run a game. It meanders. That kind of nonsense is prefect for a fluff book. It’s perfect for the fluff in the main rules/setting guide. The adventure is a tool for the DM to help them run a game for his players.

This makes you work, hard, to do that. This isn’t about leading the DM around by the nose, and it’s not about spelling out everything for the DM or the fact that a good DM could salvage it. This is about your buddy online talking to you about the game he ran last week vs. a product that helps YOU run a game for YOUR players. This product is not focused like a laser on doing that.

6 Responses to The Devil's Spine