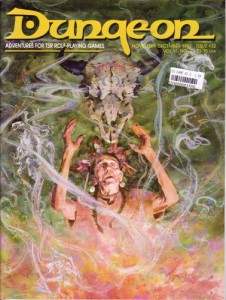 My in-laws are downsizing their home and my wife had a yard sale to help them sell their excess. At the end of setup I was (passive-aggressivly) throwing stuff in to a wheelbarrow to take down to the from of the driveway where I dumped it out in a large “$1” pile. I was struck by this. All their life, all they held on to and saved, treated like crap and sold for a $1 each. Most of which didn’t sell. Visions of vast quantities of consumer goods, pristine, going straight from the assembly line to the landfill. I can’t help but draw comparisons to how I feel about the RPG market. Free to not, is this the BEST thing that could be put out? If not, then why do it? Or why keep it if you already have it?

Enough pontificating, time to return to my hypocrisy. I’ve been out of new product to review for awhile. I’ll be hitting Origins this weekend to grab some new review material and buy A LOT of old 4e product to celebrate, in my own special way, the wonderful return of Dungeons & Dragons

This is an adventure in a forest with three (four? Five?) waring groups. And the forest is walking. It tries REALLY hard and has some great elements but could have used a really good edit. A couple of jr. druids contact the party in order to solve the problem with their forest. You see, it’s gotten up and is now walking away. Right at the village the party is in. It will be there in 3 days. It seems the head druid is way for a few weeks and some trolls have wandered in. A group of firbolg have been fighting them, and using fire to kill them. A group of truants don’t like fire and so are having the woods walk away to get away from it. The idea is that the party meets the truants or firbolg, gets them to ally, and then everyone goes and massacres the trolls. The adventure has set encounters, timed encounters, which is nice to see, and I REALLY like the Walking Wood idea. It brings THE FANTASTIC and WONDER to the adventure, something sorely missing in the vast majority of product. It’s also nice to see LARGE numbers of enemies. The trolls number in the 30’s, all in 1 group essentially, and the firbolg and treats have large numbers also. That pretty much forces the creative players play that I enjoy so much. This is a very nice idea and is right on the edge of being recommended. There’s a nice climactic battle at the inn that the DM is encouraged to force in to play, but the rest of the encounters, well, there just are not very many of them. The walking wood is actually a very boring place. Trolls, treants, and the firbolg are about it. Essentially you wander around all day until you have a timed encounter at night, when you get to actually start the adventure. There’s nothing here NOT related to main plot … and very little related to the main plot, and that’s disappointing. So while the set up might be a nice one, it’s far too long with not nearly enough variety to make it on to my list.

This is a small 10-room ‘dungeon’ on a bridge over a river. It starts strong, but ends boring. And by ‘starts strong’ I mean ‘has one good encounter.’ There’s this troll standing on the bridge (Yeah! Classic troll bridge!), but he keeps running over deeper on to the bridge and sticking his hand in an urn. When he does so a statue comes to life and whomps him, at which time the troll runs back and heals, with the statue not following. EXCELLENT! I love it! And then the troll sees the party and immediately attacks. L A M E! This was SUCH a great opportunity for some role-play between the troll and party! The mindlessness by which most encounters are written in adventures is BORING. The most boring thing a monster can do is attack. The best thing a monster can do if be friendly … while carrying a big and obvious bag of loot … and turning its back to the party a lot. I like combat, but its the easy solution and the one that can be universally appealed to at a later date. Start things off with the troll making an ally and then see how long the party will work with it, or tolerate it. The adventure tries to bring a few other elements, like a healing pool, athena owl, and the like, but it ends up just being room after boring room of monsters. Giant spiders here. Garygoyles there. Nothing interesting to play with. 🙁

A side-trek, so essentially a 2-pager. This time the party hears about a white dragon that has just shown up. Turns out it’s an albino red dragon. With no treasure. Lame screw job. I’ll never understand why this sort of thing became popular. All it does it encourage the party to be paranoid, which slows things down. This is different than a mimic or trapper. Those are one-shot ‘gotchas.’, almost traps. This is just an intentional screw-job. LAME.

A mystery in a small village with almost/no combat. The party is hired to deliver a crate to wizard in a nearby town, but then the crate goes missing. The group gets to investigate several locations, with one leading to the next leading to the next. There are extensive rumors, clues, and the like presented throughout. Complicating everything is the presence of a nibolg, with the chaos that entails. The village could really use more life to it, things going on other than the adventure and more NPC’s in the village to interact with and get rumors from. There are a lot of rumors … but not a lot of colorful characters to get them from. Further, the amount of text and lack of an overview makes deciphering the entire adventure a chore for the DM. These things are supposed to be play aids but instead generally are a lot of word to prep to run. There might be something to this to you photocopied it and took a pair of scissors and highlighter to it. Do you want to put that much work in to a first level adventure with no combat?

Is there an Elf in the House?
By Rafael Fay & Dan DeFazio
AD&D
Levels 3-5

A murder mystery in a country mansion. And, of course, there’s a Ring of Impersonation and a Ring of Silence involved. When you have to gimp the party through the use of shit like this, that’s a sign you’ve not created a good adventure. There’s a lot of things going on in the mansion: the main murder plot, a secondary murder plot, a group of NPC’s adventurers staying as guests, the host is ill, there’s a ghost, a bricked up room, hidden skeletons and, of course, the servants. All set in a 50-ish room mansion which is overly described. The amount of weird stuff/subplots is a really good thing; I love a complex inter-personal environment. The format used here, which is the traditional keyed room format, really does not fit this sort of adventure. You get a massive wall of text and need to try and hunt down things which makes running this sort of thing a prep nightmare. Better would be a list of NPC personalities/goals, a timeline, and a minimal room key. IE: reference material. This is one of those adventures that I wish I had the time to rewrite in an updated format. Maybe one day I will.

This is centered around an American Indian/plains culture with the party coming in to save the poor natives. There’s A LOT of background information on the natives and there’s a LONG section at the end which is almost devoid of player interaction. Neither of those are good things. The middle is filled with a relatively simple straight-line adventure, so this seems to be mostly an exercise in exploding the players to plains Indian culture. Kill some marauders. Visit a friendly village. Kill the chief and a small handful of warriors at an evil village. Then you get to watch the movie. Seriously, that’s just about the extent of the adventure. The ELEVEN page adventure. There’s a lot of cultural baggage here, from the Ghost Dance to war shirts and holy lances, from the AmerIn culture. There’s not a lot of noble savage; the only hint is them giving you a box of shiny round disks that outsiders treasure and they do not. There just isn’t anything decent about this adventure to justify the page count. I think you kill something like 14 dudes in 2 encounters and then the adventure is over. I’m not looking for a high body count, but I am looking for some type of content past the 2-3 encounters presented in this.