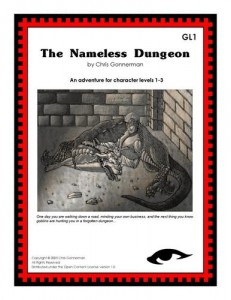 One day you are walking down a road, minding your own business, and the next thing you know goblins are hunting you in a forgotten dungeon …

I hate this adventure. More than usual. I don’t know why. Maybe it’s because the weekend is over, or my wife is busy, or I had a bad day at work, my fucking cat is trying to drink my 8am PBR. Maybe. I think, though, it serves as an excellent example of how things fail. Gygax wrote a lot of bad shit. Good DM’s are not always great writers. You have to translate your vision in to the written form for the adventure to be a success. In so many of the things I review I don’t think the vision gets translated. Somehow the great play experiences don’t materialize as a component of the adventure. The DM must add color and bring the adventure to life. But the published adventure must inspire the DM to do that. That’s the fucking point of the published adventure. I don’t know who Gonnerman is.rpggeek implies he has something to do with BFRPG. I’ve never seen it but I think people like it. I’m sure he’s probably a nice guy. He certainly has had the wherewithal to get off his ass and do thing, which I can respect. But this adventure? It’s boring as fuck. Welcome, my friends, to Dwimmermount Part 2.

The adventure is simple: your group is attacked by goblins in a forest, repeatedly, until you chase them. Then you fall through the forest floor and in to the dungeon. The goblins chase you in. This is a three level dungeon with 90 some rooms. Usually multiple levels and a lot of rooms is good sign. Not this time. Sometimes you can tell a lot from a map. Does it look generic & boring or does it looks like someone was excited to drawn it? Does it inspire you, the DM, to ask “Oooh!! What’s in THAT room?” or do you look at it and say “Meh.”Yeah, it’s got some loops. There’s an example or two of same-level stairs. Otherwise, it just looks like a contrivance. There’s nothing to inspire. The wandering table is similar. Just a list. It DOES provide a nice monster stat summary, but otherwise it’s just a list. And not a good list either. Lots of poison and AC3/HD4 monsters on the level 1 list. That’s not cool. The adventure notes that the ants (the AC3/HD4 creatures) are a kind of intelligence test for the PLAYERS. Do they charge in and die or find a better way. While, generally, I agree, that has two problems in this case. First, you put them on the wanderers table in addition to lair’ing them. That makes the parties death random, just as the Save or Die monsters on Level 1 do. Second, how do the players know? Have they memorize the BFRPG monster manual? A troll, a giant, a dragon, these are things the players will recognize. They’ll say “Oh Shit!” and run away. Great! But a group of 10 orcs, one of whom is AC-10 with 99HD and doing 1-100 damage on each hit is unfair, especially at level 1. Player knowledge is to be encouraged, but you can’t subvert that by then using things the players know nothing about and not giving any clues to them that it’s coming. That turns things in to an arbitrary killer DM game. No one wants to play that kind of game.

The encounters, through, are the real problem. They have the same kind of “maximally boring” thing that Dwimmermount has (had?) Every room description starts out with … a description of the room dimensions and where the doors are. You know, the thing the map shows? The fucking PURPOSE of the map? Yeah, that’s it. It described right there as the first couple of lines in each room. Joy. What follows is some boring read-aloud. Well, sometimes. Sometimes there isn’t read-aloud. What’s the point of this? Are you holding my hand or not? Then, there will be something in the room that is boring as fuck and has way too many words to describe. The room is dark. The room has a monster (another paragraph! Yeah!) The room has a feature that you can’t interact with. The room has a feature you can interact with, but to no effect. There is nothing in the room descriptions to catch the DM’s imagination. It’s all BLAND. There is nothing in the rooms to interact with, meaningfully, for the players. For example, the continual darkness room. There’s nothing to it. It’s just dark. Or, the room with the “Slow Mirror” that shows the room as it was one hour ago. Except that the fucking room is empty. What is shows is maybe a random monster poking its head and then moving on. It’s not just fucking boring it’s a waste of time as the players try to figure out what’s going on. What’s going on? Nothing.

It’s as if you took a minimally keyed dungeon, like Mad Archmage, and then expanded the descriptions IN THE MOST BORING WAY POSSIBLE. This looks like Stating Facts. “The room is 20 foot by 20 foot with a 10 foot high ceiling. The walls are grey fitted stone and are slightly slick with moisture. In the center of the room is table. It has four legs and a flat surface on top. The legs are in good shape but are plain and the tables surface shows signs of use, with some minor cuts and scrapes on it.” Yeah, it’s fucking description. It’s a description of nothing. How does that room support play? How does it inspire the DM? There’s room after room after room like that in this adventure … just like in the original Dwimmermount draft.

I like the Internet. You can find some great D&D shit on it. But you gotta wade through the crap to find it. This is part of the 99% of everything published for D&D that is crap. These sorts of well-meaning products are a dime a dozen in the OSR. That’s too bad. But what do I know, I’m drinking PBR at 8am on a Monday.