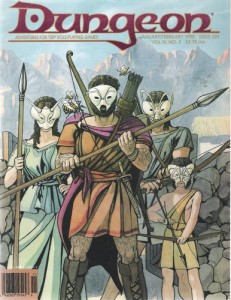 I drank most of a 5th of Black Bush in 3 hours yesterday; this is not my finest work.

This is a celtic-themed adventure in a giants cave. There are four or five pages of backstory that amount to the characters needs to grab a magic food kettle from a giant in order to feast the kings warband so they’ll go raiding. There’s a good celtic theming in this, and while the cave is small and straightforward in its layout (about 18 rooms) the adventure does do a good job with the monster. Namely, you can talk to some of the monsters.The wandering table, in particular, for the wilderness areas has a good little sentence or two after each encounter listing which adds quite a bit to the encounters. Goblins are looking for a lair, ghouls with a grievance against their former lord, and ogre looking for a goat or fox to eat. Some of the encounters are ruined by “they attack immediately!” in the case of the ghouls or “they try to get close to the party to attack” in the case of the goblins. But the additional detail there is more than enough to NOT run the encounter that way and that’s invaluable. The actual encounters in the cave run to mundane, which is too bad. There a cave with a waterfall in it, but its completely wasted, there’s nothing to it. So why is it in the adventure? Everything should contribute to the adventure, and this doesn’t, nor do many of the other rooms in the caves. Some of the rooms have a bit of nice window-dressing (a collection of helmets, some quite dented!) and a nice tea storage room. Those are both nice bits of flavor, but they don’t save the rooms from the mundane that infect them. The treasures and magic items are not very interesting, for the most part. A wizards lair provides a bit of variety in treasure but “jewelry to value of 3000gp” is not trying at all. There is some nonsense about bargaining withe the giant, and percentages of success, but the real is on one of the solutions mentioned: getting the giant to join the kings warband in exchange for the cauldron. Double-win for the king and win for the giant, a perfect solution!

This is a trip through a forest to hunt undead. The high-level challenge comes simply by making the undead 12HD. That’s a pretty simplistic way to create a high level adventure. The idea is that the group wanders around the forest, having wandering encounters, and then eventually the primary undead picks up their trail and attacks them. The wandering encounters are generally not great, just a simple list of monsters, almost all of which seem out of place for an elf-protected wood A gargantuan orc is presented as a straight-up combat instead of the cool roleplay experience it could be. Two other wandering encounters involve a band of trader sprites and a pixie wandering hermit. The hermit is particularly irritating since he talks in riddles and doesn’t give the whole story of the forest. There are a small handful of programmed hex encounters, six I believe, with the only interesting one being a group of ogres lynching one of their own for cowardice. It’s presented as a combat, which is too bad because it has endless social opportunities, if only the encounter offered more detail in that area. There’s not much to like in this one, it being just a straight-forward undead hack where the undead are wandering a forest.

Spelljammer Alert! Speljammer Alert! Spelljammer is, of course, one of the best campaign worlds ever published. And this one by Ward! Note the Ward influence immediately: it’s any level. This in spite of the fact that the party will face hordes of weird creatures. This is an Old School attitude. Load up on chickens and blankets, it’s time to go plundering! This isn’t really a Spelljammer adventure. It’s the exploration of a Spelljammer ship that has crashed on the PC’s world, and thus perhaps GIVES them a Spelljammer ship to play with. Ward is the soul of brevity: only two pages of background before the adventure begins! The party is hired by a of a thief to go check out the ship and turn over a finders fee to the rogue (classical usage of the term) and the a couple of thieves guilds. The ship is 22-ish encounters with … the undead! So many of these adventures would be so much better with an elevator pitch right up front to get you in the mood while reading. Ghost ship, tattered sails, skeletons around, spectre captain whose goal is to wipe out all life in the universe. If you went in knowing that then the adventure makes A LOT more sense. The captain floats around and keeps an eye on the party: fleeting shapes just out of vision, ghostly faces in walls, the usual ghostly stuff. Then when he thinks he knows who he is dealing with, he comes at them. Supplementing the spectre are a bunch of “balls of bones”; a rally clever way to store and launch your crew at another ship, IMHO. They are stacked up and just WAITING for someone to mess with them so the whole pile comes down and they reanimate. There’s great magic items in the adventure, like a book that you can shove food in to and pull food out of, and ghostly wheelocks (which I don’t usually get in to, but they work well here) and a small amount of backstory in a BRIEF ships journey to give a little background. I usually HATE logs & journals and diaries, find them just a cheap way to communicate things. A ships log makes sense though, and, besides, doesn’t really play much part in the adventure, just being a cute add-on for players who are interested in discovery. I note that the ship crashed because of a lack of magic items items for the furnace, yet the ship seemed stuffed with magic. Go Figure. Oh, and the helm on this ship is a Black Dragon throne/recliner thing with the furnace in fact of that. I imagine the dragons eyes glowing when the thing is fired up! Who WOUND”T want that? You’d have to be crazy! That’s the key to a good item, it makes the party drool over it and thing “Awesome!”. Sword, +1 doesn’t do that. Ring of Feather Falling doesn’t do that. Black Dragon throne with glowing red eyes DOES it. Nice job on this adventure.

This is an adventure at an abandoned river trading station, that turns out to have some demons in residence. It’s got a nice realistic looking map and a grim and gritty feel. The demons, four of them, are well described with lots of variation to their features. The layout of the station has lots of interesting features to get in to trouble with: a barrel ramp, rough cut steps outside, a couple of towers to fall of of, and a barge to end up on. I really like this, you can just imagine PC’s getting trapped in a tower, leaping off of it, being assaulted by barrels, and slipping on the rough stairs as they run. The variety of terrain and features in the map bring a nice little tactical feel to it while still feeling VERY realistic of a river trading station. More so than most of the adventures, this one feels real, hence the grim and gritty vibe. It deals with death, trauma, demons, domestic abuse, and revenge in a really good way. This FEELS like a demon-haunted adventure. It’s wordy and the treasure count seems low to me, but it delivers. It would work well in either Harn or 2E, which I think speaks well to its design. The best encounters kind of stick with you. You read them one, maybe twice, and they are completely internalized. You need not hardly refer to the encounters again during play, its like you wrote it yourself. This entire adventure is like that. Read it once, maybe twice, and just run it with the map and maybe some creature stats. That’s all you need.
The Chest of the Aloeids
by Craig Barrett
AD&D
Levels 6-8

This is a linear adventure in ancient Greece. The players get transported there, back in time, and go on an adventure to save Hermes before he became a full god and ensure the gives the lyre to Apollo. The characters see an omen. From that point on they are led around by the nose, told to go from a to b to c, and have the adventures at each location before moving on. It’s not that he individual encounters are good or bad, its that the characters are led around by the nose to most of them. Getting off the railroad means fighting your way through hordes of centaurs. Go to a oracle shrine nearby to get your omen read, get transported to ancient Greece, meet a hunter, who directs you to a village, who sends you to a beekeeper, who takes you to a caste. They all have a decently Greek feel to them, but in total it doesn’t feel like Greece, or even a region. It just feels like a set of disconnected events. The citadel of the Cyclopes, the finale, may be the worst. It’s got a map and lots of rooms but just has a general description. The players are meant to find Hermes and then they get to watch him run around a play a joke on the cyclops. Whoop-de-doo. I love being a spectator when I ‘play’ D&D. Too many of the encounters are too tough for he party and yet presented like violence is the answer. I must say though the rewards are good. It works out to be a kind of wish for each character, but takes the form of a kind of cell phone to Hermes. You got him out of trouble so he’ll show up and get you out of trouble. I like those sorts of things. I don’t think players gets wishes frequently enough, especially when they come so strongly flavored.