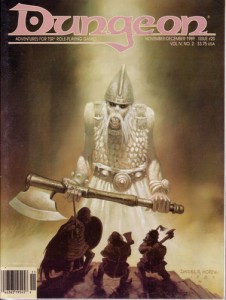 The Ship of Night

This is an underdark adventure, ala D1, to find an abandoned dwarven city and “the ship of night”. Some old lame hook wants the party to bring back word of what this weird thing is; her only references are a budget in some accounting references and the name of the project: The Ship of Night. What follows is an underdark adventure straight out of D1, complete with player map and hex & line map of the underdark showing major, minor, and natural passages. I really really really don’t like the hook; it strikes me as not trying at all and that MAKES HULK ANGRY!!! A sage wants you to go look in to things. It’s not even a Rosebud type thing, which be kind of cool, just the normal everyday old “sage wants us to go”. Dragonslayer AND Citizen Kane did it better. The underdark has six programmed encounters and a wandering monster table. The wandering monsters table is used, as instructed, to “liven up a dull section of travel.” That is lame. In a dungeon the wanderers act as a kind of push your luck timer; the more time you are in the more danger you are in as your resources are depleted. Wilderness wanderers though, because they only happen once or twice a day, should be full fledged encounters; interesting things that happen with interesting folks, be they monsters or otherwise. This is just a generic underdark wandering monster table that isn’t particularly interesting at all, at least not in the way D1, D2, and D3’s were. The five encounters are, generally, less than thrilling. Two are guardposts, straight out of D1. Just little set pieces with derro (the primary enemies in this adventure.) There’s also a little derro mining camp, a gargoyle lair, and the main derro encounter, in the lost city the players are traveling to. By far the most interesting encounter is the lair of a drow necromancer. She’s got a nice little set up going, along with her juju servants and, remarkably, does NOT attack on sight. Her area is well described and interesting and she’s put out there as an ally to the party. I find that sort of thing MUCH more interesting than a plain old ‘she attacks immediately!’ type of encounter. Roleplay possibilities abound when the monsters & creatures are treated like real people with their own ambitions other than simply murdering the party. Don’t get me wrong, I love shivving an NPC in the throat with a dull spoon till their head pops off and then using it for a puppet as much as the next PC, but at least give me the option, and the background support, to talk to them first. That way I can get to know them, get avarice over their treasure, and weigh my chances for murder hobo’ing. There is some oblique references to her being at odds with the derro but this is never really explored or explained, just a reference to ‘her enemies the derro.’ and another in their section about her being an enemy. I’m not sure if something was left out because of a bad edit or what, but that needed to be expanded upon.

The main derro kingdom/encounter is weird. The whole thing is set up with heavily guarded gates such that you can’t sneak in. And the derro attack on sight. But then there’s this whole ‘market day’ thing going on inside, as well as a secret cult opposed to the derro king who is causing all the trouble, and other references that make you think that it should have SOME social component to it. It’s a little underpopulated as well, and lacking any notes on what a coordinated response to an attack from the party would entail. That sort of thing is critically important in any lair encounter with intelligent opponents. There’s some handwaving about them all being geniuses but not acting together because they are chaotic, but the whole place just feels wrong. A lot of work could turn the derro kingdom in to a Kua-toa style encounter with a social element. You could also just steal the drow necromancer for a different adventure. As with most adventures from this time period, it takes more work to prep and salvage things from it then it is probably worth.

A solo adventure for a 10th level human thief. I don’t review Choose Your Own Adventure books, although I sometimes enjoy them. I suspect that every “all thieves” adventure ever written would work better as a solo thief adventure, so there’s that.

This is an adventure through a man-scorpion temple to grab some long-forgotten loot. It tries REALLY hard to deliver interesting content, and, for the most part, succeeds. But when it’s bad it’s REALLY bad. The bad starts with the backstory. A floating sky ship business lost one of its ships while it was transporting the treasure horde of a wizard form one city to another. The ship crashed and the players get a map willed to them by a dead relative. I LUV the gonzo of Spelljammer but I don’t get in to the magical ren-fair/economy thing that is implied behind the “magical airship transportation service” background. I also don’t dig the whole “you get a map via a will” thing. That’s a hook that’s not trying at all. Maybe some Nigerian 419 scam thing or an underworld deal with shady intent would be a better way to introduce the map to the players. Both are certainly more interesting than “you inherit a will.” That kind of curtsey/simplistic stuff that shows up in the world of Mystera/Basic D&D never struck me as cool though, even though basic D&D is my favorite system by a long shot. There’s an overland journey involved but nothing interesting in it, just some throw-away encounters on a wandering table that add nothing to the adventure.

The man-scorpion temple, the core of the adventure, is another matter. It is FULL of flavor, but it is poorly communicated in many places. It’s supposed to be a cave-like place made out of the skeleton of a HUGE red dragon. The bones and so on make up the ceiling walls of the rooms while a whole shit-ton of melted and slagged treasure make up the floor. That’s pretty nice in concept but fails in practice, as the map is just a generic “square rooms” thing and most of the descriptions don’t take advantage of the the skeleton or treasure as one of the room elements in anything other than a window-dressing sort of thing. Even then, it’s not really well described. The manscorpions get a nice treatment though. They go bare-chested, decorate themselves, braid their hair, and paint their giant scorpion pets/guards with bright colors and intricate patterns. The temple doesn’t really do anything interesting, encounter-wise, and the undead section tacked on to the end feels tacked on. Nice concept for the adventure but poorly executed.
Ancient Blood
Grant & David Boucher
AD&D
Levels 3-5

This is an arctic overland expedition followed by the exploration of an old giant fortress. It’s got a strong norse feel to it. The players are hired to deliver a box of dried plants (herbal medicine) to a village about 200 miles away. Once there they see the headman/king get killed by a frost giant ghost. They then travel 300 more miles, hopefully, through arctic conditions to get to an old frost giant fortress to break the ghosts curse. There’s a whole “wilderness survival guide”/”torture the players with bookkeeping for rations, etc” thing going on that I don’t think adds any fun to the adventure at all. I can go to work if I want to find the crossover point to carrying rations/winter supplies to travel speeds. I’ve played Source of the Nile and it isn’t fun. The journey to the village has a nice little wandering monster table that adds some encounter notes/suggestions next to each entry. I like that sort of thing. it prompts the DM to riff off of it and loads their imagination up to run the adventure. Tribesmen are from one of the villages and may travel with the party back. Animals act like animals. These little notes add a lot to the adventure. The programmed encounters, two, are nice also. The party passes by a steaming crack in the ground … who wants to go look! Just that visual imagery of seeing that after a snow adventure is enough to sucker me in. There’s also a nice little encounter with a group of half-ogre trappers. It’s written more like a straight up combat, even through they each get names and some description that would imply there can be a social element. The social path would be much cooler and interesting. The village the group reaches has a nice little “get there in a blizzard and be ushered in to the great house to get stranger out of the storm” thing going on which, again, I think builds a lot of cool things up in my mind as I’m reading, which in turn allows me to communicate the scene and feel better to the party. There’s a page-long read-aloud in the longhouse that night that ends with a railroaded killing of the chief. That’s less cool, but I understand why its there. The group then travels to an old fortress and explores it. Both the journey, a shield-wall, and the fortress proper is full of GREAT imagery. Blood fountains, centuries old sacrifices hung out, and other great little staged scenes. It does have a very ‘desolate beauty’ thing going on, similar to the snowy cabin/forest in Legend, but much better done, with crunchy snow drifts, giants tables, and eerie silence everywhere. It’s got a kind of quiet horror thing going on that only an abandoned and silent place in the snow can deliver, combined with the weird proportions brought by giant sized tables and rooms. A nice nordic gothic feel, if there is such a thing. It’s a little slow for my tastes but beefing it up would ruin the slow burn. If someone can figure out how to solve that paradox then this would be worth running, if the “wilderness torture” game problem could also be solved.