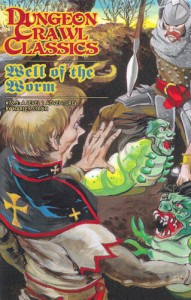 In ages long past and best forgotten, the world was ruled by worms. Deep within dreaming jungles, and high atop monolithic temples, fell priests sacrificed the blood of man and his kith to the mammoth war-worms. One wizard would return the world to the rule of the worm. From deep within the blood-soaked earth, calling upon the spirits of the slain and blood of the dying, rising from the moldering bones of fallen warriors, the war-worms have returned. Their foul Mother – last of her kin – births more crawling horrors with every passing hour. The age of the worm is once more upon us. The call is sounded: Who will rise to purge the darkness?

This is an exploration of a lair in a well full of vile giant maggot-things with human faces. Fun! It’s got lots of weird locales, monsters, environments, and magic items, just as you’d expect from the new line of DCC adventures. Even the map is decent enough. For a small adventure, clocking in at sixteen digest-sized pages with a lot of full-page illustrations, it packs in a lot to like. Approved.

Harley Stroh has a talent for describing some very interesting and evocative locales with a minimum of words, and this is no different. The plains of the Barrowdown are located between two baronies and every spring the armies face off, littering the fields with the dead. The fields can’t be plowed for all the dead … but the farmers make a nice living looting and selling arms. I am ashamed of myself for summarizing the background in such a shitty way. Harley builds up a little view of an environment in a much better way than I could ever communicate it. Anyway, it’s short and just background information. But still pretty cool. It’s at this point that the hooks show up. Crappy hook #1: village elders call for volunteers blah blah blah. Crappy hook #2: Sleeping in an inn the party hears cries for help blah blah blah. Awesome hook #3: coming in to a village the party meets a grizzled and bitter old vet. Everyone else has left, but he remains, fending off the blood-sucking giant maggot worms, but now too weak to fend them off. The first two are just the normal old boring same-old same-old be a hero hooks that are just some throw-away nonsense. Number 3 though … that’s got some chops to it. It starts with some hackneyed “returning to your childhood homes” nonsense, but then … you’ve got some kind of awesome Charlton Heston I Am Legend shit going on and that’s pretty bad ass. The whole “worms show up at night and suck out the villagers blood” thing is pretty cool in all three. It’s got to be the primary monster though, the giant worm maggots, green, with human faces. VERY nice. That’s all just the background/hook stuff though.

The adventure is a short eight-ish room dungeon. It’s surprisingly interesting considering its small size. Tunnels in the floor go other place, a devil face covering another room, and three or four elevation changes, none of which seem like they were just thrown in. Pretty good for the size! The dungeon starts off well: there’s a cracked wall in the well whose crumbling mortar can be pulled apart to gain access to the dungeon behind. I know it’s hackneyed but I love it. It must have something to do with how Stroh describes it, or some appeal to the world of the fantastic hiding just behind the mundane veil. Inside there are mucus covered walls straight out of Alien with arms, armor, and victims embedded in it. Sweet! I love a good Alien vibe! There’s the predicable mother worm, but also a great devil face with a pool of blood with worms swimming in it. Nice! Maggot blood bath! There’s a decent magic item or two as well, like a dagger that exudes a slimy coating of poison and can be commanded to poison more. It’s well described with a brief, but interesting, history/description.

This is good. It’s short, it’s got a great entrance, the monsters are good, the environment is gross and exciting … It’s worth keeping, and probably worth having.