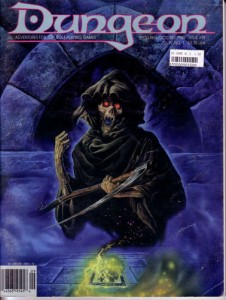 This is a weird little adventure. It’s a little village in a swamp with a monster leaving nearby. That’s it. The idea is that the party comes to the village looking for [something] and while there gets messed with by a hag. They eventually go in to the swamp and kill the hag and her buddy. I _think_ that’s the goal the designer was going for anyway. There’s some description of the village, some description of the a couple of people in the village, and a lot of detail given to how the hag can fuck with the party without the party getting wind of it. There’s a relatively good scummy bar/inn in the town, with a couple of decent NPC’s running around in it. In particular, there are a couple that are there just for the PC’s to hire. That’s a decent addition and something that few town & village adventure do. They both have a decent little bio and some motivations, which is exactly what they should have, and need, in order to run be run effectively. There’s a small garrison well described, as well as an alligator farm, and the home of an old wise woman. That’s not exactly a wealth of information to run a town adventure, but what is provided IS good. Well described and very flavorful. The hag runs around, invisible, changing self, passing without trace, undetectable, etc, etc, etc, messing with the party. The old wise woman, who the village hates, is also a target that the hag uses in order to foment trouble with the party and distract them. The swamp adventure is really just a little throw-away wandering monster table that ends in the hag lair. There’s a little tactical challenge in defeating the hag and her monster ally. What IS really interesting is a lot of the treasure. Tim does a great job putting in wonderful descriptions for many of the magic items. It’s not a helm of underwater action, it’s a helm of highly polished steel, with a crest in the shape of a kraken throwing its tentacles down in coils to form the eye and nose guards, with green crystal lenses over the eye guards. That’s a pretty sweet magic item. Likewise, the crystal ball and bowl of commanding water elementals get great descriptions. That’s exactly the sort of detail that I’m looking for and expect. THAT”S what the designers job is: communicating their imagination to the DM. This is a rough adventure; its going to take a lot of extra work for the DM to run the village appropriately and add the flavor that the swamp deserves. And if you can do that then you don’t need the adventure and probably resent having to wade through all the text.

This isn’t really an adventure; it’s a single encounter. There’s a bunch of mimics the size of houses that pretend to be a village. How is that an adventure? And how does it take three pages to describe it? But, hey, at least there’s no treasure! There is nothing to this. Yes, the pretext is nice. No, it doesn’t justify being in here. It’s just an idea that someone had that deserves to be expanded in to a full adventure and instead gets a single encounter setup.

A seedy little dive bar in a seedy part of of a seedy town. The group is hired to case the joint for the town guard. Over five days they hang out, watch the place, and report in. At the end they get paid. A couple of days later the assassin that was impersonating the town guard kills the bar owner. Yeah! There are a dozen or so NPC’s that are well described, to the point of being overly described, and there are a decent number of events that take place over the five days. It takes six pages to get through the background and NPC’s before the meat of the adventure is arrived at: the events! which take up one third of a page. Hmmm … misplaced priorities anyone? The inn gets a pretty exhaustive room listing, the vast majority of which is completely useless. The purpose of the second floor description is for the party to sneak up and map it out. The emphasis should be on aspects of the rooms which enable that, or provide red herrings or other things for the party to report on. But not here, oh no, just line after line of useless descriptions of how many toothpicks are in a jar in a forgotten locker in a useless closet. The core concept here is good but there is not enough emphasis on the events and the NPC’s have too much description. You need a brief summary of the various actors to make it easy to refer to them during play.

This is another non-adventure. Five pages to describe an ambush by a set of monsters in a glade. It’s a bunch of weird mish-mash monsters, like cyclopskin, a boggle, needle-men, and the like, all thrown together in order to provide a tactical challenge to the group. That’s an encounter, not an adventure. It’s also a SHORT encounter in any form other than a Dungeon magazine article. It IS interesting to see a kind of early lead-in to the 4E mixed monster encounters/tactical setups with artillery, controller, and basher monsters.
House of Cards
Randy Maxwell
AD&D
Levels 9-12

This is an adventure in the hideout of a criminal gang. The hideout if half mundane hideout and half weird tomb place. Sometimes you have a good idea and you try REALLY hard to build an adventure around it … but it just doesn’t work. This is an example of that. Or maybe it isn’t and DOES work. But I doubt it. There’s a gang war in town with the old guard criminal gang, a VERY loosely organized of crime buddies/groups. The new gang, the Night Masks, is coming in and running a kind of gang war. The group is charged to go fix it. And then there’s the bullshit. There must be a PAGE of text that describes how the party is NOT supposed to fix it. No baseless accusations. No mercenary hiring. No militia. No fun. This sort of stuff is repeated later on in the adventure when it takes a page or so to describe how the doors open and the 99 ways that the group CAN’T use to open the door. No magic. No passwall. No teleportation. No Bibgy’s hands. No polymorph. No fun. No creativity. The doors (some of them anyway) DO have an interesting mechanic with a Deck of Many Things card set in to the door. That’s the “bright idea”/gimmick of the designer, and it’s a decent little idea. It takes forever to gi through the 99 permutations of how the party can’t bypass the doors, which is lame. The adventure should encourage player creativity, not limit it. The headquarters is divided in to two halves, the first half of which is just mundane and consist of long and boring descriptions of various guardrooms and barracks. It’s not really interesting or special and just consists of boring and uninteresting room description after boring and uninteresting room description. The second half, the old tomb portion, is more interesting. Of course all of the wall are lined with lead, etc, in order to gimp the party. There IS a cool encounter or two inside this section, including a charnel pit packed FULL of undead. Skeletons, wraiths, a shadow, a yellow mustard, all down in the pit and clawing to get out. That’s pretty sweet and the picture that accompanies it adds a lot to the flavor. The idea of a gang war with a couple of competing groups, and each group having a bunch of of little sub-groups, is also cool. The Shadow Society, the Sultans of Sunset, and the Midnight Maharaja’s are all gangs that are referenced, through throw-away monster encounters in the dungeon, but the entire surface/city portion of the adventure is pretty much glossed over. That’s too bad. I’d have really liked to have a seen a good social adventure up in the town that is then combined with the dungeon/fortress portion, maybe with an infiltration aspect. Instead we get the little tacked on “gang war” sentences and an idea forced upon us that, while cool, is hammered to death in the details.