The Complete Dungeon of the Bear 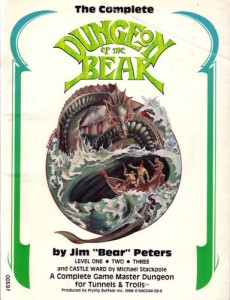 This is four levels of charm and imagination that has seldom been reached since. It’s a mess. It’s for Tunnels & Trolls. It has more imagination and whimsy than many many modern products. As some point in the RPG hobbies history the concept of ‘imagination’ became standardized for your enjoyment. That’s too bad. There’s a charm and whimsy present in SOME of these older products that is generally not found today. I was introduced to The Bear at GenCon a couple of years when I played in a game run by [name drop here.] I fell in love with the … zaniness? Whimsy? Whatever it was I loved it. I went back to the FBI booth and tried to buy it, only to be told they had been sold out for many many years. Fast forward to this year and the FBI booth had a fresh 2013 reprint. I know this is for Tunnels & Trolls, but I think a little prep work, or with none, you run it on the fly for D&D.

The adventure has an above-ground ruined castle and three dungeon levels underneath. The thing REEKS with ‘Dawn of the Hobby’ charm. Invisible demons guard doors and ask riddles. You can pull the gold teeth out of a charnel scene to grab some cash. Gold plates are hidden behind freshly plastered walls. Rats bit the hands searching for treasure. Rickety floors collapse and over-powered magic swords lie waiting, clutched in their dead skeleton masters hand. One of the guardian demons demands ‘a sieve full of water’ while another demands ‘a rope with no end.’ it’s up the players, not the characters, to come up with solutions to these puzzles. There’s a pond on the ground floor in which the party sees gold pieces. But Wait! They are actually leeches that look like gold pieces!

The dungeon proper has a giant ballista the size of godzilla that can be fired at the characters. There’s a classic rolling ball trap. One room floods with water … and then a bunch of piranha are dropped in. When’s the last time you saw that in an adventure? The magic items and monsters are as charming as the encounters. A 10′ long serpent is actually a beautiful maiden that was forced to swallow a gem that polymorphs her … and anyone else, who swallows it. Another gem melds with the person who touched it and turns them in to a giant badger … until sunlight touches them and then the gem melts out again. You just don’t get that kind of stuff today. One room has an orc in it holding a 500# boulder over his head, which he throws at the party when they enter. He’s got a ring which increases your str by a factor of FIVE, or TEN if you’re an orc. There’s a magic treasure chest which turns copper in to gold … but make you weaker in the process of doing so. It just goes on and on and on in its awesomeness.

The rooms are some weird mix of the bland, awesome crazy encounters, and weird ass scenes. There’s a giant statue submerged in a lake with a sword above his head.
I think this thing is, like $6, IN PRINT. And it’s like $3.95 on DriveThru. You are a FOOL for not having this.

8 Responses to The Complete Dungeon of the Bear