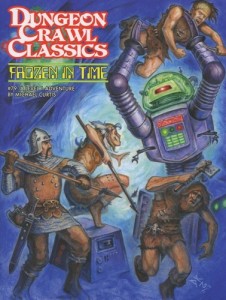 Eons-old secrets slumber beneath the forbidden Ghost Ice. Since the time of the Elders, the local tribes have shunned the crawling glacier, knowing it as taboo land that slays all who tread its frigid expanse. Now, the Ghost Ice has shattered, revealing hints at deeper mysteries entombed within its icy grasp. Strange machines and wonderful horrors stir beneath the ice…

This is a trip through a twelve room or so sci-fi complex. It has a decent-enough map for its size as well as the usual assortment of weird machines and stasis creatures, weaponry, and call-backs to modern earth. it also features the typical ending of an overloading power plant. The environment and descriptive test can be hit and miss, with a some decent imagery intermixed with blandness I’m not used to seeing in the new DCC. It seems closer to the old DCC line … and that’s not a good thing.

A time-thief from the far future has built a base in a tiny backwater dimension in order to hold his stolen treasures. He died there, and not his base, under a glacier, has been exposed to the locals. Inside is the usual assortment of ‘modern’ rooms. There are power plants, kitchens, trophy rooms, stasis fields and anti-grav tubes. You can play with the control panels and get shocked and zapped with radiation. Some of the anti-grav tubes work and some do not. There is the usual key-card/etc door opening mechanisms. There are stasis tubes full of monsters, and maybe an ally or two. There is a trophy room with The David, Venus de Milo, Mona Lisa, and alien blaster rifles. The elements are all here for a great adventure.

Something is missing and I don’t know what. It is lacking that certain something that seems to make the new DCC line great. There’s a ant-man from the atomic wars. That should be fodder for a lot of great things … but it is somehow lacking. There’s a yeti-man that can be an ally … and yet is utterly devoid of personality. There’s a mark III blaster rifle from the android wars …. The problem with these items, and much of the adventure is the lack of interesting and gameable material. It gets close … “from the android wars” or “from the atomic wars of 2525”, but it just doesn’t go for that last critical bit … adding character to the game. It needs some sort of interesting description that help intrigue the players. The rooms descriptions continue this trend, suffering from a lack of interesting descriptive text and gameable action elements. This being DCC, the environments need to be interesting enough to give the players something to riff off of for their characters heroic deeds. Theres a bit of two that manages to get closer … rooms with floors covered in soaking wet carpet, glass, and rotting fish … that’s good stuff right there … but far too little of it.

This one needed another serious edit pass before being let out.