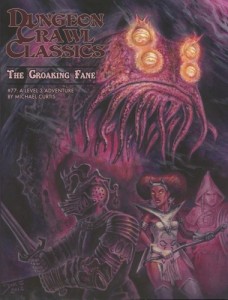 For as long as men remember, the Lord of Evil Amphibians carried out unspeakable rites in his squatting temples situated far from civilization. Tales of human sacrifice, squirming servants, and rich but loathsome treasures were whispered of his followers. Now, unexpectedly, his servants have seemingly vanished, leaving behind their fanes to molder in the marshes. A brave band of adventurers gathers to explore one such tabernacle, eager to discover what riches—and terrors—the Lord of Evil Amphibians has left behind…

This is a 30-room or so two-level looting of a temple dedicated to a frog god. Not THE frog god, but the one before him, that he deposed. Rumor has it that its been suddenly abandoned with all its PhAt L00t left behind. Time to get looting! The pretext is ok, and the atmosphere in the adventure is above average. Some of the encounters really bring the freaky-deaky It’s quite difficult to get past the verbosity in places and some of the imagery could be stronger. Well above the industry average but below the stellar heights that the new DCC line generally hits.

The current frog god deposed the former one quite some time ago and the former gods followers went in to “seclusion”, where that is defined as “everyone knows about the temple and that it exists but they don’t really make themselves a pain so we ignore them.” Now rumor has it that the followers have all disappeared, leaving their temple in the swamp empty and full of treasure. Murder Hobo Time! There’s a decent amount of backstory provided, none of which is generally useful to running the adventure. Likewise there is some hand-waving done about a swamp adventure before getting to the frog temple, but no real meat provided. Both of those tend to be the norm in the new DCC line; they concentrate on the meat of the dungeon after explaining in too much detail the background. It’s not as bad as the Dungeon Adventures I’m slogging through, and certainly does not fill several pages, or even a page, as many OSR adventures do, but it’s long enough to annoy me since it’s length doesn’t really add anything useful to the adventure. In total, the lead-in to the actual encounters is only two pages long, so I should probably just shut up about length and advise everyone that you can just completely skip it.

The maps here are simple. Level one is just your typical church layout while level two is a simple branching dungeon layout. Neither bring much interesting to the adventure, other than the most excellent DCC annotation style of embedding artwork and notes on to the map. In fact, the artwork in this adventure really adds to it. I don’t usually mention art, most of it doesn’t add much to running the adventure. DCC maps, however, are always thick with extra detail, sometimes to the point of being difficult to use, with lots of little pictures embedded in the map. The general artwork in this adventure adds a lot also, more so than the text does. There’s a lot of artists listed in the credits and I must say that they’ve all done a great job of depicting the mutated frogs and their ilk that are about in the temple. More so than the text, the art in this one delivers that imagery that I’m looking for in helping me run the adventure. The strong flavor it communicates feeds my head, which then riffs on it and allows me to in turn build up an image for the players. The room descriptions tend toward the mundane rather than strong imagery. “The wall here bear yet more peeling frescoes.” Uh, thanks, but … that’s boring. Curtis needs a better thesaurus and about twice as many adjectives and adverbs as he is using in this.

The encounters, proper, are fairly good. Heavy sarcophagus lids to be shoved aside and mummified toads to be looted. A fountain basin, screaming out to be looted, is full of carnivorous tadpoles that can strip the flesh from bones. That’s a good example, even though its the first encounter. There’s a valve at the back, hidden, that can drain the water which will in turn leave a bunch of tadpoles flopping around to die. Great little set up imagery, great “trap/monster/weird thing happens to the players”, good way to bypass it, and nice imagery when bypassed ti search for the treasure. Which is … a ring shaped like a toad whose tongue makes up the band. GREAT treasure! And it’s magical to boot, helping the wearer avoid some targets of frog attacks. This one little encounter hits almost all of the marks, providing strong imagery, things to mess with, weird and freaky effects, a good treasure that the party may keep, and a magical treasure with an unusual effect. There are several other encounters that get pretty close to this as well, providing decent set ups without them being obviously set-piece encounters. The monsters are, of course, all unique, just as they seem to be in all of the new DCC line.

I have incredibly high standards. This adventure is pretty close to the line but I’m going to keep it. For the new year, 2014, it is my hope that the new DCC line continue on, and find a way to tighten up their writing somewhat while keeping all of the fantastic unique environments and wonderful imagery.