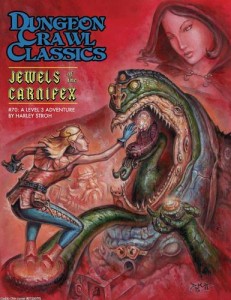 At the end of a forgotten back alley, in the weird and otherworldly marketplace of faiths known as the Bazaar of the Gods, stands the ruins of a forgotten chapel. Once the cult of the Carnifex was celebrated throughout the City of a Thousand Gates. But a band of holy warriors rose against the cult of executioners and torturers, casting down her signs and scattering her devotees to the winds. The fate of the cthonic goddess, and – more importantly – her fabled jewels remains a mystery…until this night.

This is a small eleven or twelve room crawl through an old temple complex. It’s got the usual ‘new’ DCC elements: very strong imagery, unique monsters, interesting encounters, weird effects, and decent magic items. It also has the usual cramped/linear/modern adventure map … although in the new DCC line there’s a decent number of limited offshoots which tend to mix things up MUCH better than the old DCC maps. It’s new DCC. I feel comfortable by now jst telling folks to go buy it without a review. Goodman, Stroh, and Curtis have things down by now and their new style is even better than these older/launch titles. They are not perfect, but they are CONSISTENTLY good.

The sprawling decadence of Punjar. Go read that intro again. “Forgotten back alley”, “otherworldly marketplace of faiths.” I have no idea how they do it but Goodman Games delivers the flavor. This adventure has one of the oldest hooks known to man … which is then described in a way that makes it seem new and fresh and full of awesome. It’s so simple it’s stupid. The players win a map in bar game. How many times have you seen that? And yet in this adventure … there is enough GOOD detail that a little throw-away hook seen a thousand times before instead comes alive. Won from Magmar the Lucky, a rogue of no small repute. Just that alone gets me going! The map, a few scribbled notes on the back of some wine-stained vellum … maybe it’s stolen from Magmar while he sleeps off an epic black lotus binge? COME ON! You’re soul has to be DEAD to not get worked up by that! I don’t do justice to the writing; it’s better than I intimate. It is, however, the core of what makes these DCC adventures good. They are able to communicate extremely strong imagery to the DM in a short amount of space. This is strong powerful flavor and is EXACTLY what a DM needs in order to run a game. THAT’S the purpose of the written adventure. [Hyperbole time!] It’s the purpose of EVERY written adventure. Once you can communicate the essence of something to the DM then they can fill in the extra detail. The writer has a vision and they need to communicate that vision to the DM in order for them to then be able to translate it to the players. Good adventures do that in a very evocative and strong manner. I don’t know if it’s the elements they choose, or the adjectives & adverbs, or what. However they do it, GG does a great job at it, with Harley possibly being the best of the three core writers they rotate between. Harley delivers consistently in the encounters in this adventure. Each one is strongly evocative of a place and happening.

A rushing waterfall over a narrow ledge that has to be passed to get to a door sealed with lead. A DOOR SEALED WITH LEAD!! Did you read that? To loot the place the characters are going to have to break in to something sealed with lead! I’ve seen lead sealed doors before. They suck. None of them stick out. They are generally some way to fuck the players over in some room in a dungeon. But in this adventure its how you get IN to the dungeon. It’s not a gimp, or a lame trap, but the front door. That’s cool. The adventure continues to deliver room after room of this sort of thing.

Uh … the temple has some guys in it, horribly disfigured. Ostensibly they are good guys guarding a great evil … in the form of a hot chick goddess OF EVIL! Who favors the party with bonuses! The whole thing probably culminates in a great big running battle between rooms. These are DCC rooms though, so there’s lots of stuff to interact with in the running room battle.

The room text could be tightened up. Many of the rooms have A LOT of text n them, very little of which adds to the room/encounter. The great mass of text distracts and confuses and obfuscates the good parts of the room that the DM needs when running the thing. This, more than anything else, is the nail sticking out in the new DCC line. They need to find a way to make the room descriptions smaller while retaining the strong imagery in them. Some of this may be simple editing “why are we telling them this is where he has his lab? Its the name of the room, maybe they’ve already figured that out.” or “perhaps this trivial background data form 3 eons prior isn’t relevant to running this room …” and some of it is going a bit lighter on the rules mechanics. 3e+ adventures, of which DCC falls in to, generally seem to beat rule mechanics to death. DCC is better than most but still spends A LOT of time explaining how things work. That’s not a good thing.

But the adventure is. Go buy it.