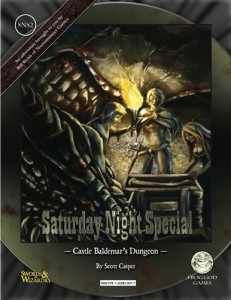 While in the small town of Corvusrook, the characters are accosted by the mage Framnagle. The irritated mage insists they undertake a quest for him, exacting revenge on his former apprentice Hymor – who now lives in the form of a Blue Dragon in the dungeons of the deserted Castle Baldemar.

This is a single dungeon level with 28 rooms that tends towards the funhouse side of things. The forward claims it is based on the first half of the Gen Con IX Dungeons from 1976, with expanded text. It’s tournament heritage shows, with the encounters being a lot more like set pieces than a typical dungeon and lots of things to district unwary players. It’s ok as far as tournament adventures go … better than most modern ones because it’s less linear.

You’ve been warned: this comes from a tournament adventure and has some leftover parts from that heritage. Things don’t always make sense and the hook is a completely unfair. While in a bar a wizard stumbles in to the party, takes offense at them, and then is belligerent until they “agree” to go on a quest for him. Causing a commotion will bring the Captain of the guard … who supports the wizard. Basically you go on the adventure or die, just like the preable to G1, except this adventure takes a lot more words to communicate the same thing … Thanks Lame Read Aloud text! Like I said, tournament adventure. What IS interesting about this introduction is the description of the town. It takes about half a page (one column) and does an EXCELLENT job of summarizing the town with enough detail to run it without beating things in to the ground. Some of this comes a dense paragraph listing the important inhabitants of the town. Comments like “mostly retired bandit and now head of the laborers guid” or “rake and secret leader of a band of poachers” give the NPC”s a bit of personality and get the DM’s mind going while still leaving enough room to improvise and elaborate. The rest of the town description does much of the same, sprinkling in little extra details all over the place that can be used to expand upon. It’s DENSE with ideas while not being verbose with the text. Nice!

And then there’s Muade … err … the adventure. It makes absolutely no sense as a whole and is just a collection of loosely tied together rooms. That’s not entirely true, it’s kind of charming in a way. The ruined castle above is abandoned. The first two levels of the dungeon, not described, are well looted and empty. The third, this adventure, is a bustling little place with a lot of disconnected shit going on. There are three minotaurs guards in the first three rooms who are part of a larger tribe (not detailed or mentioned further) who are on real guard duty. WTF?!!? Like I said, it harkens back to an earlier age and play style when that shit wasn’t important. The encounters are fun enough, they have a leader, they surrender when a certain one if dead, one is bored and throws shit in a well, one fights with two morning stars, and so on … lots of little details to help bring the encounters to life.

And that’s the adventure in microcosm. The rooms act more like 3e or 4e set pieces except without all the hype and overblown nonsense that typically comes along. Pre-1e set pieces. IE: Funhouse. There’s a couple of new monsters and a couple of magic items that are non-standard that add a little variety to the magical treasure front, but for the most part it’s +1 this and stone golem that. It all ends with a dragon encounter that’s not straight up combat, which is ALWAYS nice to see. I like to view the dungeon as a town three states over in the US. Some people are dicks but for the most parts they just want to get by. And sometimes they want to eat you or have orders that no one gets in to the club without paying the cover. And sometimes they have piles of PHAT L00T that the players very much want … That makes things a lot more interesting.

Worth it? I don’t know. It’s decent enough to be a nice contained one-shot for a con or a tourney. It’s a little implausible for a campaign, but DOES have a decent amount of that OD&D encounter charm that I like so much. There’s a fair amount better than this and A WHOLE LOT worse than this.