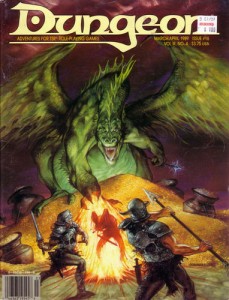 This issue is interesting because it has several location-based places to visit with strong social elements: a castle, and three different towns. The first has the strongest possibilities, I think, due to the limited scope of the castle, but the pirate town tries hard and the Dwarves have some good NPCs floating around. This is one of Dungeons stronger issues, thus far, if you are looking for things to lift and rework.

It’s interesting to see the designers struggle with the format. Everyone is clearly used to using the room key format from the many published adventures. It’s pretty clear though that the format fails in many of these. These are not rooms to be explored but rather NPC personalities with motivations and goals, factions and large expanses in towns that need general flavor, not room descriptions.

This is an adventure on a floating castle full of cloud giants. With only 400-ish review under my belt I can’t speak definitively of the genre, but it IS the best Floating Castle adventure I’ve seen yet. The usual cloud adventure elements are in here: some parts of the cloud can be sunk through, lots of flying creatures, raids on lands the cloud floats over, and so on. What IS interesting is that this isn’t a straight up hack. The giants have names and personalities and even a sentence or two about goals. There are several factions running around on the cloud island/castle, from several giant factions to humans to dragons. If you go in with a “the characters are foreign ambassadors trying to stop the raids on their homelands” then the adventure will make a lot more sense. Talk with people, get involved in the politics, maybe take care of a problem or two for one of the factions … you get the idea. Think of all those adventures where some monster is visiting another one (the cloud giants in G1 stand out, but there are many examples) and you get the idea. The characters could be here for awhile in that scenario, providing a nice change of pace without a plot being forced down their throats, although it could use a bit more in the ‘suggestions for further play’ category to give the players something to do while on their embassy. It suffers from the wordiness and lack of the fantastic, both of which seem to be style at the time. It doesn’t feel particularly like you are in a fantastic location and there’s a lot of text wrapped around the rooms in order to provide the uninteresting detail that does exist. A modern version might have less emphasis on the room key and more n the flavor of the place, while keeping the factions & NPC’s that are the key takeaway from this. They are not particularly clever factions or politics involved, but …. any port in a 1989 storm.

This is a 14 page adventure describing a dwarf village/town and The Unexplored Caverns that are vexing them. The caves are only two pages long, and have very little going for them. The rest of the adventure details the dwarf village. The map seems a little small for all the activity implied. And there IS a lot of activity implied. There are random street encounters for day and night but they are all of the Flavor Text variety, describing everyday life, rather than the Murder-Hobo-Fun-on-D&D-Game-Night-Monday’s variety. The NPC’s have a couple of paragraphs each but they don’t really have any interactions with each other. This is a critical missing element. In the Cloud Giant adventure the way the various inhabitants of the castle interacted with each other is what made the adventure interesting. The NPCs here are more like static mannequins, stuck in their home/places of business, with no thoughts or motivations with anyone else. There’s a cute dwarf tavern encounter table, but then entire adventure, including the table, lacks anything new or interesting about dwarves. We get the usual Dwarf stoic/home/family/craft values and the tavern encounters are just things like “Someone shouts out “By my beard” and so on … not exactly an alien culture. The Darkness Beneath in Fight On! magazine has spoiled me on cave adventures. In comparison to those excellent ones, or even Stonesky Delve or Pod Caverns of the Sinister Shroom, this one is VERY mundane. There’s not much weird or interesting or even realistic, as in Stonesky.

This is quite a short adventure for Dungeon, only five pages. A thief is extorting a village by pretending to be an undead guy at the local barrow. The real undead guy shows up. The characters explore a village (not detailed) for clues, then go to the barrow and discover not the thief but the undead. The core of the adventure seems decent enough, with some good extortion efforts on the thief’s part and some decent clues for the party to follow up on (signs painted in blood, and a classic: mutilated livestock) to figure out its not really the famous general back from the dead suddenly demanding cash. The dead general actually has a modicum of a personality as well. This could be salvaged in to some decent background noise near the players home base, with the general maybe being a resource, or thorn, for the players for many a session. The village needs work and the entire adventure could fit on 1 page easily, so you have to dig through padding, but worth taking a look at.

This is a pirate town, with associated politics, and a dragon adventure at the end. Pirates are raiding shipping with the aid of a dragon. The characters are there to bring the place down … although the whole hook/mission part is really not dealt with at all. That’s fine in this adventure; the main attraction is the pirate town. The town has four sections: the leaders quarters and the quarter belonging to each of the three captains, roughly differentiated by race. Each section of town has its own encounter key and wandering table with enough variety to keep things interesting for a short while. There’s the usual “looking for a fight” gangs, as well as at least one organized street gang and several notable personalities from a 1/2 orc prostitute/assassin to a grumpy jailor, and spies of ever sort. Each section of town generally has a bar or two detailed as well as a notable or two, and then a bunch of stuff that doesn’t matter like the orc barracks and ships stores and so on. There’s a lot of factions mentioned and more implied and that come to mind. At the end of the entire thing is the dragon in a decent lair. With work you take this one and turn it in to a little mini-campaign within your campaign by adding some subplots and beefing up the personalities of the various spies in town.