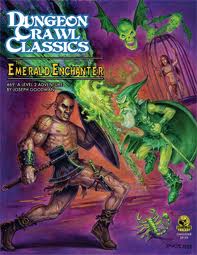 Villagers have been disappearing—and some of them are your friends! A number of clues, various old superstitions, and a handful of vague omens point to the brooding citadel of the emerald enchanter. This silent monolith has sat undisturbed atop a windy ridge for centuries. Legends say that a green-skinned sorcerer dwells there, where he conducts strange experiments and builds enigmatic machinery. His emerald constructs patrol the grounds of his citadel, and he is seen only rarely when he ventures out on nefarious errands that end in horrid screams and strange lights coming from his citadel. Now you believe he is holding your friends captive. To rescue them—and potentially acquire some loot along the way—you set off to invade his inner sanctum …

This is an exploration of a wizards tower, with a skull, and emerald theming. It has all the usual charm of modern DCC adventures: unique monsters, a good homage to Appendix N encounters, and decent freaky shit. It falls short on the magic item front, resorting to (mostly) lame standard potions & scrolls. It’s got a decent map but suffers from from verbose text and the mundane bits seem out of place. Worth keeping.

The text in the publishers blurb is the only real background provided. There’s a short paragraph that could be called ‘a summary of the current situation inside the wizards fortress” but there’s no other backstory. Which is good. I hate backstory. I want to see text useful to me running the adventure not ancient history form 10,000 years ago that has no impact on the adventure. What WOULD be nice is a SLIGHTLY more detailed hook or locale. Two sentences about a couple of village NPC’s prisoners or three about a recent raid. That’s all; if done in the DCC style then there should be more than enough detail in those short descriptions to get the DM off and running with a good foundation to set the adventure in.

The encounters in the wizards fortress almost all harken back to those strong archetypes that somehow the hobby has moved away from. There is a weird portal table that things fly out of and that he party can leap through. What are those things? Why Emerald skulls with bat wings and red ruby eyes! Come on, how much more of an appeal to appendix N can you get? That is some great shit. It can be summarized quickly, provides great imagery in the DMs mind (which then should translate to them being able to create great imagery in the players minds as he translates and fills in the gaps) and has an instant “Oh Shit!’ coolness factor to anyone encountering it. What’s great about this adventure, and most of the modern crop of DCC product, is that manage to pull it off time and time again. A mural golem that pulls tiles from the walls. A chained demon in a salt pentagram. A mass of protoplasm with a great eye and pseudopods in a jail cell. Mummy’s heads and brains of ancient wizards who you can consult with. These encounters appeal to something ancient in me, almost like an ancestral memory of appendix N. All of those issues of Heavy Metal, Thieve’s World, and 60’s/70’s fantasy lit are still alive deep under all of my post-secondary analytical training, and these encounters appeal to them and dredge up those feelings … allowing me to instantly fill in the detail needed to bring the encounter to life.

The magic items in this adventure blow chunks. I’m used to seeing weird and unusual things from DCC, things that certainly did not come from any book. Instead we get potions of spider climbing and scrolls of light. Lame. As I type this, the spider potion could turn the characters limbs in to spider ones, which would be nice, or the light scroll could create a tiny star, also cool, but both of those would be better as one-time use objects WITH THAT ADDITIONAL FLAVOR TEXT instead of just another lame potion/scroll. Scrolls should be ancient magics (and there is an example of this in the adventure) while potions should have horrible flavor text associated with them … and NEITHER should in ANY way resemble ANYTHING EVER done for D&D. Ever. I paid my $9.99 (maybe plus tax, I got these at GenCon) and I want the extra detail of a non-book item dammit! I’m paying for YOUR imagination and for you to enable mine, not for a 1E DMG retread.

The text for the encounters is too long. There IS a lot going on in several of the rooms but still, too much text. I recall that Many Gates of the Gann had a lot going on as well but the rooms seemed much shorter. In this adventure Goodman falls in to the classic trap of starting a land war in Asia explaining things. Explanations suck. Explanations remove mystery. Explanations contribute to Wall of Text syndrome. The burning need to EXPLAIN things ruins D&D. If the toilet isn’t fun there shouldn’t be one. If the barracks are not fun then there should be one. It doesn’t matter “The Emerald Enchanter engages in many alchemical and magical experiments.” No shit Sherlock; that’s the basis of the entire adventure! That text adds NOTHING to the description of the laboratory room. If it were just one sentence it wouldn’t be bad but there’s multiple lines of what are essentially filler text about background, history, and the like. One day I’m going to learn something about the publishing business so I can call out the fuck with that doesn’t push back on this. Aeryn Rudel, the editor? Did YOU not push push back on Goodman? Was it your job to? Either way, the text ends up the adventure and there’s too much of it in the room, and the process repeats in the other rooms.

I wrote a lot of negative stuff up there but that shouldn’t dissuade you. While the adventure has its issues its overall good enough for me to keep … and that’s saying something because I have very high standards and keep only a VERY small percentage of what I review. Other publishers write better adventures but so far no other publisher has managed to consistently produce the high quality that the new DCC line is currently rolling out in they quantities they are doing. They are solidly producing B material are a fast rate, with some reaching A levels. B’s are no insult coming from me. Nice job Goodman Games!

1 Response to DCC #69 – The Emerald Enchanter