SNS3 – Ice Tower of the Salka 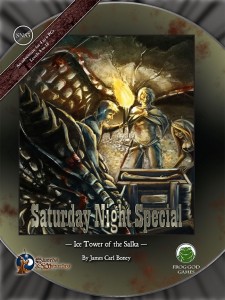 Sixty years ago, a mysterious flood of glacial ice utterly buried the tower stronghold of the Salka, a powerful and evil sorceress known throughout the land. Now, fissuring of the deep ice has revealed the rooftop of this lost tower. The secrets and treasurers of the Salka lie within, awaiting a band of powerful adventurers to explore the depths of her ice-entombed stronghold.

This is a four level wizards tower with about fifty five rooms in it. There is a hint of something interesting here but the encounters and adventure fail to deliver on the implicit promises made. “This will be cool!” is what the adventure and encounters promise … and instead vague generalities are delivered. Many adventures seem to fall in to this category: someone has a decent idea but fails to deliver on it. It’s a high-level adventure because of he high HD creatures and no other reason. That’s the most trivial, and useless, way to make an adventure high level. Boney needs to make a second attempt at this adventure and really work hard on it.

The Salka! Her tower has mysteriously engulfed in a glacier 60 years back and now no one but the old even remember how to get there. A party of hunters recently found a crack in the glacier with a mighty cavern inside, and a set of flat stones with a trapdoor set in to them. The tower has been rediscovered … and the one hunter who dared venture in did not return. The intro and background is short on this one and does a good job at evoking the mystery that all wizards towers should have. This extends even to the name; It’s not Bob the Wizard but rather … The Salka! It is at this point hat the adventure starts going downhill, sadly. What follows is some kind of exercise in generic, dull, and lifeless adventure descriptions with a modicum of interesting content thrown in. Interesting content that is generally devoid of the joie de vivre that gets one excited about running it.

Room 1. If you don’t say the password that no one knows anymore then walls of force slam down over the exits and fireballs start going off in the room two turns later. Did you catch the problem here? It’s not the password; the party is high level; they should have cast some spells and the non-asshole GM should have rewarded them for their legend-lore/etc. Twenty minutes after the walls go down the fireballs go off. Or did the designer mean rounds? Or segments? Good thing the editor caught it. Oh wait, they didn’t. Ug! Back to the central issue: the entire room description consist of “two intricately carved pillars.” Oh, there’s a lot of text on how the trap works and damage, and so on, but the only description of the room is what I mentioned: two intricately carved pillars. I’m not paying for rules. I’m paying for the fluff. Somehow, somewhere, D&D supplements became about rules and the actual goal of the product, providing interesting content, was lost. And no, the mechanics of te rules are not interesting content. I paid my $9.99 plus tax, how about ONE sentence about the pillars and maybe another about the room proper? Two red pillars intricately carved with baroque designs of thousands of dragon heads in a room whose walls are blackened, blasted, and cracked? I suck and have no imagination at all but my description is miles better. That’s what you’re paying for. That description. And we didn’t get one. Which means we were ripped off. As an optimistic midwesterner i REALLY don’t like feeling like I’ve been ripped off, which is why my reviews are always so bitter.

Lets me cite another example that is related but not identical. Two rooms on this level have a weird door. It’s a normal door that can’t be opened, period. There is detail beyond detail on the door, the room, and, ultimately, the demons that come through it. That’s the only reason for the door: for some demons to come through and attack te party WHILE THE PARTY IS IN A DIFFERENT ROOM. So, when the party is in a different room and can’t see the door some demons come through the door, go to the room the party is in, and attack them. It is impossible for the party to pass by the doors before the demons come through because of the map layout. What this means is that all of the text used to describe the doors and how the demons come through them and the rooms beyond is all completely useless with no point to it at all. How about “two demons get summoned” as text instead? Ta Da! All that text removed. The content is neither interesting OR game-able in this case. The content in an adventure MUST fit one of those categories, and hopefully both. Otherwise its just useless backstory and description that has no impact n the DM running the adventure. And, remember, that’s the point of the product, TO HELP THE DM RUN THE ADVENTURE.

The monsters are almost all straight out of the book. The treasure is almost all straight out of the book. The mundane treasure is boring. “4 gems worth 200gp”. What’s the point Boney? If you’re just going to appeal to some boring ass magic items in the DMG then why not just tell the DM to roll on the tables themselves? Or maybe we can just shortcut all of that and just tell the DM to make their own damn adventure and use their own imagination. Yeah, the imagery of an urn of ash & sand with a skeletal hand in it and magic rings is decent, one of the few decent things in the adventure. How about doing just a LITTLE bit more and actually putting a modicum of effort in to the treasure so it feels magical and wonderful and something the PLAYERS would want? Or, you could not try and just include shit from the DMG. You know, like you did.