ONS2 – Death in the Painted Canyon 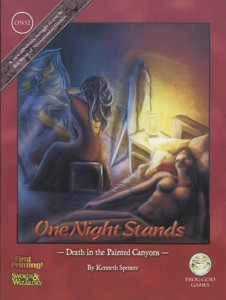 A band of gnolls has been attacking caravans passing from the caravanserai at Salt Springs through the Painted Canyons and on towards the oasis town of Beni-Hadith. The Satrap of Salt Springs has offered a bounty on their heads. Can the PCs stop the attacks once and for all?

This is a relatively straightforward desert adventure with a decent amount of flavor and a nice open-ended lair assault at the end. Some treasure improvements could be made, as well as some nit-picky things regarding monster organization during the big end-game fight, but it’s generally got enough flavor to inspire and dig A LOT of content from. I found it good enough that now I want to run a Arabian Nights Scum type-game.

The local autocrat at an oasis needs mercenary scum to solve his gnoll problem. Not the most promising of starts, I know, but the rest of the adventure is so full of flavor that it makes up the lackluster hook. What we have here is really a kind of adventure locale that has an adventure running through it. You get a description of the local oasis, a description of the lair, and a little adventure sprinkled around with a mystery behind it all. It’s nice and it leaves a strong impression in ones mind. There’s local descriptions of the small oasis, the surrounding region, and a few of the major NPC’s in the place. It’s not necessary organized like a locale; the adventure is integrated in quite tightly with the locale. But it doesn’t matter, the place rocks and screams for reuse.

It is at this point that my own crappy writing skills show up. I seldom feel like I can communicate the richness of flavor that some products bring. In this instance there’s just enough foreign words and customs sprinkled in to give it an exotic flair. That’s combined with a excellent description of the town/building that makes up the oasis. It’s a kind of Kowloon type place except with a vaguely desert air about it. The potentate in charge gets a personality that is both fair and generous as well as dangerous, ruthless, and even somewhat capricious. This all combines to bring this little watering hole to life in a way that few places are. To be sure, there’s not much more too it. Shops, NPC personalities, and the like are missing and it would have been to see this expanded upon a bit,especially given that the place IS intended for reuse. But, overall, its very strongly described in a modicum of words and dances vividly in the imagination.

The adventure has a couple of events in town and a couple on the caravan trail and then a big monster lair. The lair is a nice affair. It’s laid out very … non-linearlly? and full of flavor. What you end up with is this kind of place that the party can approach in many different manners. I LOVE that sort of design. Lot’s of ways in, lot’s of open-ended play options. The descriptions of the various locations are pretty well-done also. You get some good descriptions, light but which allude to more. It does a good job of communicating the non-human and brutal nature of the creatures without going overboard in the gore/salaciousness department. I really like the open-ended way the place is laid out as well as the focus on some of the activities going on in the camp/lair. I think it really makes the place come alive. The treasures could be better described though. We get vague mentions of trade goods and “the best worth 10,000 dinars” and the like, but I’d really prefer to have some additional detail here. I’m paying for you to use your thesaurus. 🙂

I feel a little bad in writing such a s short review but I don’t know how to make it longer. I REALLY like the locations in this and because of that the encounters that tie them together. The whole things comes together very well and my mind immediately ran away with things like long or pairs of raiders seen up high in bluffs, and other vaguely desert/arid imagery. That, plus the excitement this generated in me o run a desert/arid game, should speak volumes as to a recommendation.