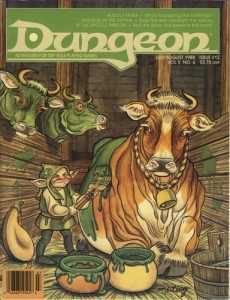 This is supposed to be a spooky adventure. The characters are stuck in a lighthouse while the dead assault it. While camping in a shallow cave on of them is possessed by a ghostly lighthouse keeper and runs to the top of a nearby lighthouse. The lighthouse is then assaulted by a bunch of dead sailors who died when the keeper neglected his duties. At three-ish pages this is REALLY short by Dungeon Magazine standards. It’s too short. The whole thing is supposed to be a creepy assault with a kind of cramped and claustrophobic atmosphere. The designer says as much in one brief sentence. Unfortunately there’s not enough here to enable the DM to do as much. Zombie assaults are about defending the building with what’s at hand … one of the few times victorian style lists of rooms contents are appropriate. In addition the nearby town, which is supposed to be creepy & abandoned, is not detailed at all. The problem here is that you can’t just say “run it spooky”, you need to provide resources to help the DM run it spooky. That’s what we’re paying for. Without that you haven’t really provided anything of value to the DM. “Zombies attack while the group is in a lighthouse.” There’s no value in that. It’s very important to remember when designing an adventure that it’s your job to communicate the vibe.
Scepter of the Underworld
by James Jacobs
AD&D
Level 12

Solo adventure, for a fighter, in Choose Your Own Adventure style.
At the Spottle Parlor
by Rick Swan
D&D
Levels 2-4

This is a whimsical little adventure with some strong NPC’s. As a result you get a very nice little evening of gaming driven by the interactions of the NPC’s. It’s really exactly the kind of whimsical feel with strong themes and strong classical archetypes that I groove on. A rich old crippled guy, a well known gambler, invites the group to gamble that evening. They arrive to find a fat cleric, a dumb kid, and a hissing lizard man all sitting around the table. What results is some prelude scene setting and then ten rounds of gaming. It’s characterized by the priest begging for donations for his temple … which he then generally gambles away. The dumb kid has to have EVERYTHING explained to him. The lizard man thinks someone is giving him the evil eye. And the gambler doesn’t seem to care that he’s loosing. Then the hobgoblins show for the slaves they pressured the gambler in to. It’s got a long into but the vibe here is really great and the writing communicates the feel of the NPC’s and the feel of the adventure VERY well. For example, the priest is very high strung and nervous, more so lately because he has only been able to solicit 9cp in a week of trying to raise funds, as charged by his superiors, for a new holy shrine. There’s 11 or 12 ’rounds’ of conversation given, which I all found delightful. There’s even a little section at the end on salvaging the adventure if the PC’s knock it off the rails. The designer is one of the piece of shits responsible for one of, if not the, worst product of all time: WG7 Castle Greyhawk. With this adventure he slightly redeems himself: I will now NOT incoherently rant at him should I ever meet him. Il will, instead, coherently rant at him.
Intrigue in the Depths
by Michael Lach, Rocco Pisto
AD&D
Levels 4-7

In to the sea, you and me, to play some D&D! The group is hired by some mages to go check up on their undersea spell component delivery. Can’t breathe water? The mages supply you some magic! Need some free action? The mages supply some! Can’t speak sea elf? The mages supply some magic! But of course they can’t be bothered to go do it themselves. It never fails to amaze me how people can set their adventure in an exotic locale and then fail to make it exotic. Instead of flavorful descriptions of amazing locations and encounters we instead get the boring ass descriptions that make up the mundanity of modern life. How undersea villagers farm, what the workload of the villages are, and so on. SO. MUCH. LAME. There is a single exception to the boring ass shit in this adventure and that’s the description of a family of sea trolls. They each get names and brief personalities, and are outside wrestling sharks … that’s some great shit. It’s going to be totally lost since the party is just going to hack them down, but the initial effect stirs up imagery of the troll encounter in The Hobbit. Otherwise it’s just a boring adventure that’s forced to be under the sea.
Huddle Farm
by Willie Walsh
AD&D
Levels 1-4

This is a mystery adventure in a halfling farming village. It didn’t have to suck. It does. Two farms have a lightweight feud going on because someone built a hedge blocking someone else’s blackberry right-of-way. That’s GREAT. It shows the mundanity of halfling life. It’s absurd and nice and flavorful. The feud escalates to crop destruction, barn burning, and painting one guys cows green. Again, not bad from a certain point of view. Especially if it were presented as something wholly out of place. There is, of course, a third party work that’s stirring the shit. The problem with this adventure is that it’s based around a typical Room Description format. We get exhaustive descriptions of each of the farms rooms, almost none of which is relevant at all. The adventure just needs some lightweight farm descriptions and some good lightweight NPC and village descriptions along with a brief outline or timeline. Instead we get a bunch of data buried in giant room text descriptions. There’s really not much actual content here at all if the overblown room nonsense is ignored.