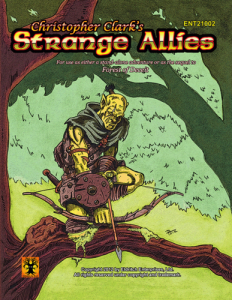 A forlorn wagon lies abandoned at the side of the road. Curious, you decide to investigate. Suddenly goblin arrows fill the sky, and a burning sensation assaults your forehead. Goblins within the trees shout spiteful imprecations and it is all over almost as quickly as it began…except that your fellow adventurers have rags over their noses, and everyone seems to be moving away from you. The reason for this behavior becomes abundantly clear when one of them shouts at you,”Dude! You stink!”

This is a little wilderness adventure, mystery, and lair raid that is either a railroad or a Wander Around Until Something Happens adventure, depending on how the DM chooses to run it. It notably features the chance to pick up some allies for a HUGE assault on a goblin lair. And by “Huge” I mean 200 goblins in an 80×80 room HUGE. The generic nature gives it an interesting feel, as the creatures, spells, and magic items seem fresher than a book-standard AD&D adventure. It’s not complex, but the basics are generally done ok. The devotion of the EE guys to their generic format and LARGE layouts is admirable, especially in light of how much their generic format and large layouts suck.

Oh’s No’s! A wagon on the side of the road with a dead merchant! And with the ensuing ambush starts another lame adventure derived from a lame hook. But wait! What’s this?!!? An adventure based on that hook that’s not lame?!?! Say it’s not so! My cold and icy heart has thawed, just a little! From a humble goblin ambush at a wagon attack comes a decent adventure from Chris Clark. Clues at the wagon scene lead one to believe there is a captive. A trail leads in to the forest. The party spots someone watching them who takes off. The group is cursed with a stinky disease. There are at least six different motivations there for a party to pursue the hook. Each one is slightly different and probably leads to the the wilderness encounters being hit in a different order. That may be one of the more interesting parts of the adventure: depending on the parties motivations after the attack the DM can use the encounters to enforce that viewpoint without necessarily railroading the group down a certain path. This isn’t exactly explicit in the adventure but that’s how things look like they could turn out, which is fine with me.

The group is going to wander around the forest having some animal encounters and some bizarre animal encounters before running in to one of the pre-programmed encounter areas. That wandering will lead to the party (maybe) picking up some allies and having at least one little side-quest: freeing a druid from madness. Eventually the road probably leads to a goblin lair stuffed FULL of goblins and well defended due to natural terrain. It’s not clear to me why anyone would assault the goblin lair. That seems like do-gooder work and unproductive. It IS stuffed full of treasure though, so …. The allies are an interesting assortment with their own goals and motivations. The writing is a little long/large but the personalities generally come across strong enough that you don’t ned to refer to them again after the first casual read, and that’s generally a sign of good writing. [In fact, i bitch about terse descriptions all the time. I went back and reread one of my favorite terse descriptions: the description of Old Bay’s cave from the Crab-Men/Bowman issue of Fight On! magazine. It turns out the description was a little longish. Not excessively so but certainly longer than I remembered. The value in it though is immediately apparent: it was so full of flavor that to this day I can recall the flavor of that encounter and how to run it off the top my head.] Certainly while the NPC’s are strong the encounter areas kind of all merge together and are much weaker with not much really standing out. Except for some of the wandering table entries. “A doe scrambles in to the clearing and then explodes for 1d6 for no apparent reason.” Wow! Now THAT’S the kind of shit I want to spend my money on! There are a couple of others like this as well, two more in fact, and they are just as good. I wish there was more like this. I do want to emphasize the NPC’s. I think they get a bit of a gloss-over but it’s clear to me that at least one of them should be a major player in the game and probably the other two as well. They are going to add A LOT to the adventure, but the DM needs to work them in.

Ultimately the group may be faced with an assault on a well defended goblin lair with LARGE numbers of goblins inside. This is a kind of tactical assault/kooky plan stuff that I think D&D thrives on. There are something like 200 goblins inside and the entrance is VERY well defended because of its location. It should be a fine challenge for a higher level party. I love these sorts of things (large combats, difficult places with no real set path forward, etc.) This one could be a little better with perhaps a surrounding area map and maybe a slightly more complex cave to allow for some more options once the party reaches it.

The monsters and treasure get an uplift here because of the generic nature of the adventure module. They seem a lot more OD&D like because of the weird ad-hoc nature of their abilities. The druid has a power, not a spell, and the cleric does weird magic and not Cleric Stuff. Likewise the magic items seem more unique, simpler (in a folklore kind of way), and somehow more magical than just showing something from the 1E DMG in to the treasure list. I heartily approve. Magic should seem magical and wondrous and creatures should be full of weird powers. The feel this imbues is one of wonder and mystery and I think D&D thrives on that. At least the kid of D&D I like anyway.

Yeah, the formatting sucks and there’s lots of repetition and the initial set up appears lame and one NPC has a gimp magic item and the entire things needs a HARD edit to shorten the verbosity, but it’s a decent little adventure. I give it a C or C+, which means it’s better than at least 90% of the crap published.