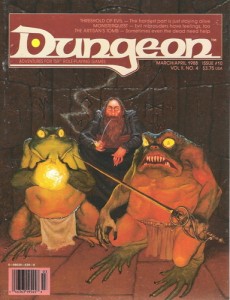 This is a short expedition to a forgotten shrine of twelve rooms. You’re looking at about 24 wandering monster checks to get to the shrine, with the wandering monsters being straight out of the book. The shrine proper is mostly nothing special; just one more of a large number of throw-away adventures. Almost. While it has its fair share of overwrought text, mundane descriptions, and “a xorn just happens to be swimming underneath the room and is attracted by tremors”, it also has at least two interesting things in it. The first is the protector of the tomb. Some poor native idiot keeps the temple up … or at least keeps up the exterior of the temple. He’s far enough away that the party may not suspect him and close enough that the party is sure to encounter him. He bides his time, clears away the jungle growth from the temple, and reset the first trap. I think that’s pretty nice and shows a decent way to integrate some realism and flavor in to an adventure without things bogging down. There’s also a platinum handled gold knife: a magic sacrificial knife with the whole ego/personality thing going on. That’s pretty cool and something I haven’t seen before. (IE: doing it to a sacrificial knife.) Otherwise … the adventure is nothing special. Boring magic items, boring rooms. Yawn. No flavor to speak of.
The Artisan’s Tomb
by Matthew Maaske
ADD-OA
Levels 3-5

Finally, an OA adventure in Dungeon that sucks! But even then it has a different flair. The party meets a ghost who wants you to break in to his tomb and smash a vase so his soul can pass on. He’d do it, but there’s a spirit guardian and he can’t get by it. The whole adventure is only three encounters, so it’s suckatude comes from its short nature and the lame hook of meeting him while camped out one night. It IS a nicely adventure pretext though.

Ug! An All thief adventure! All signs point to SUCK, Captain! The party travel to a nearby town and raid a thieves guildhall, trying to recover the McGuffin. The wandering monster table for the wilderness isn’t bad; it includes little notes about what the wanderers are doing, which I always appreciate. There are a few too many “they rush by” sorts of descriptions, but overall the wandering table is a decent effort. The guildhall is just another building stuffed full of boring encounters. Mundane rooms, training rooms, quarters, etc. The whole thing is more than a little mundane and boring. There’s not many notes at all about routines, schedules, and the like, which would be better for a caper adventure. There are a decent magic item or two: a bookmark of continual light and a pair of “penetrate disguise” glasses, for example. The whole thing is just too normal and not enough gameable material.
Monsterquest
by Vince Garcia
AD&D
Levels 1-3

You get some pre-gens for monsters who need to sneak in to a fortress to recover the orc chiefs McGuffin. Sewers! Oh yeah! The party then travel to a temple to get the chiefs drinking horn. There’s a decent encounter or two in the temple: jumping biting skulls and the like. This may be good for a one-shot but not much more. The fortress needs to be much more overwhelming to encourage the monsters to not just kill everything, and that means guard schedules, etc, in order to pull off the caper. 🙁
Secrets of the Towers
by Larry Church
AD&D
Levels 1+

This is a large set of towers that are scattered all over the land and are all linked in a certain way. You could put this in the start of a campaign and drop some hints and have a good set of plot devices that reappear again and again in the game. As such this is much more of a campaign resource and because of that one of the most useful things in Dungeon. The towers have a bunch of teleporters in them that link to other towers, twelves in all, for adventure from first level all the way to “name level.” They each have something going on and s such provide a good baseline for sprinkling through a campaign, especially if you spice things up a bit, both in and around the towers that the party travel to.

Ug, another high level adventure. You get the climb a mountain, using the absurd Wilderness Survival rules, and not use your magic items to get in to the wizards base. That’s because he’s cast about a zillion wishes to keep people out, so you have to slog on foot. Once there you get to fight clones of the wizard and his minions over and over again, as well as a few Slaad that are conveniently hanging about. There’s nothing fantastic or interesting here, just room after room stuffed full of people for you to kill.