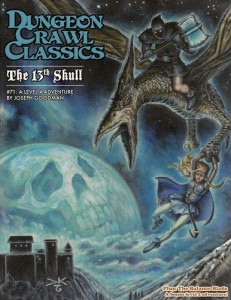 Thirteen generations ago, the ambitious first Duke of Magnussen made a fell pact with an unknown power, who asked for but one thing in return: the thirteenth daughter born to a Magnussen duke. Now, generations hence, the daughter of Duke Magnussen XIII is stolen away by a hooded executioner riding a leathery beast. As it wings back across the city walls to drop behind the Duke’s mountain-top keep, all who watch know it alights in the Magnussen family crypts, where the devilish secrets of thirteen generations have been buried and forgotten – until now… This adventure module also includes The Balance Blade, a short level 2 adventure in which a wizard’s patron makes a simple request: travel to another plane to retrieve a legendary blade of neutrality. But once the journey is in motion, the wizard finds that not all is as it seems!

This is a time-sentiive exploration of a crypt/cave under a nobles keep to find his daughter before she is sacrificed. It’s a pretty straight-forward affair but with some interesting encounters. It reminds me a bit of my favorite designers, Dave Bowman’s, work, if he were much more verbose. There’s a brief second adventure, unrelated, linear, and predictably, also included. The first would make a good one-shot for people familiar with DCC. The second has some ideas that can be stolen.

Legend abounds that a local nobleman, 12 generations back, made a pact with the devil to sacrifice 12 generations of his heirs in exchange for eternal life with a silver skull. Generation 13 is here and the local worthy is afeared for his daughter, the supposed last to be slain. During a public execution of someone calling for her death, so the prophecy can’t be fulfilled, a figure in an executions hood shows up riding a pterodactyl and swoops in to whisk her away. Guess who gets to go save her?

What follows is a not uninteresting romp through a couple of family crypt rooms and then down to cave whee a river, a hellmouth, and a couple of magic circles await. It’s a decent, but … confining/ adventure? It feels mostly linear in nature even though there are a couple of paths and the cave is mostly one big room with a couple of interesting sites in it to explore. There’s a nce crypt room where shadows linger and ‘attach’ themselves to people. Theres a cool magic circle full of body parts, and a pile of corpses to play with, and a gaping hellmouth in a river, and a silver skull sitting on top of a high pillar that just sits there and does nothing while various things shows up to kill the party. This feels like what its supposed to be: the pact chamber of someone who sold his soul. So while the encounters are limited in nature the interesting ones are quite interesting and the entire thing is set up to allow a classic moment of gaming: tossing the skull in to the hellmouth. That’s a pretty classic moment in genre media, but it feels forced here rather than the natural way that a Mighty Deed tends to come in play of DCC. So, is it bad to pul in a crumbly wall you can push over on to someone? I don’t know. You’re kind of corralling the players in to certain actions by dropping these things in. They’ll take advantage of it and they’ll have a great time doing it, so why does it really matter if it was natural or predicted if no one notices? Similar to jumping puzzles or swinging rope/chain puzzles … they are there to provide a classic moment … which works totally better if the party fires crossbow bolts with ropes in to the ceiling.

The treasure and monsters are typical DCC. That means the monsters are unique and no one is going to know what the hell they do, which I LOVE. I LOVE DCC monsters. The shadows work in a completely different way then they do in D&D and yet they do the same thing. DCC pretty consistently does this, referencing a monster and giving it powers that seem to stem from the same source as the D&D monster but then handling things is a totally different way … that is somehow the same. In the case of the shadows, they ‘attach’ themselves to players and drain strength. But the way it’s described is much more … natural? integrated? I don’t know. I wish I had the ability to look at a monster and do this. My D&D games would be MUCH better and they’d have a much different, classical, feel. Treasure is the usual toss-up. Monetary treasure is poorly described “grave offerings worth 20gp” while the magic treasure and encounters are described much more richly and vividly.

The second adventure ends with the party attacking each other, a party death, and a magic teleport at the end in avery Deus EX manner. It’s linear and generally has stupid encounters. There’s a couple of decent things worth stealing: the tomb at the end of the Last Colossus and a weird magic hallway. Otherwise it’s just “have these encounters in a row and kill each other.” Not too interesting.