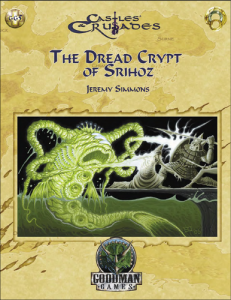 For leagues uncounted, a path has followed the tortured contours of a cliff which hangs over the storm-battered shore of the icy northern seas. The eternally damp rock is covered in places by a sickly film of grey mosses and lichens, which is the sum total of all the life forms able to scratch out an existence in this gods-forsaken hell. For atop the cliff stands the entrance to the dread crypt of Srihoz, a vampire of ancient name and deadly reputation. Only the bravest adventurers dare enter this place…

I submit to you, gentle reader, that no other adventure has done more to harm the RPG hobby than the 1975 classic Tomb of Horrors. It seems like this is the only model upon which every high level adventure is based. From its shores a thousand thousand thousand crappy deathtrap dungeons have been launched … and far too many of them in jr high.

This time an evil dude has spread rumors throughout the land in order to lure high level morons to his tomb. You see, he only wants to feed on the most powerful of individuals … after, of course, they have navigated his tomb of deadly traps and creatures so that he can ensure he is only feeding on the strongest and most powerful … uh to ensure that they are sufficiently weakened. Uh .. .and the tomb hasn’t been entered in hundreds of years, even though Evil Dude has lots of minions on the outside subtly spreading his rumors. What that really means is that the designer is too lazy to come up with a real hook for his adventure and that he’s too lazy to come up with an original adventure idea, instead just cloning the Tomb format and pasting on the same tired old ‘Proving Ground’ theme that has been pasted on time and time again by people looking for an easy way to throw whatever they want at a party. Look man, I know it’s a land where elves fart fireballs, but can you try just a little to add a pretext of realism to the adventure? I swear to fucking Hastur, if I see a stasis cage in this adventure …

The map here, just as in Tomb, is not half bad. There’s a lot of variety on it, lots of different sized hallways, lots of same level stairs, secrets, and small tunnels. I like this sort of variety on a map. It lends an air of mystery to the map. The players don’t know how big it is or if they are on the same level or where the hallways lead to. That sort of mystery does a great job of keeping the PLAYERS on their toes and instilling the proper apprehension on them. There are, of course, no wandering monsters. It’s a tomb trap with one master.

Let’s see here … room one is a pit trap. Room two is the usual deadly garden. Room three is a freezy trap. Room four is a storage room full of diseased food. Stasis field trap. Mimic bed. Another storage room. A fire trap. A demon summoning room .. with demons. The problem with all of this is that it’s nothing special. It’s all stuff seen a zillion times before and it’s presented in a manner that adds nothing interesting. Oh, a plant room. Hostile plants. The read-alound does nothing to enhance the imagery of room and is instead just a massive block of text. The best encounter may be one with an undead aboleth, but it takes two whole pages to describe. The treasure is hit or miss, with things like pearl-studded boxes containing gold ceremonial daggers being at least half good.

I’m half convinced that the format uses by Goodman for these C&C products is half the problem with the “Wall of Text” and the inevitably “pay per word” being the other problem.