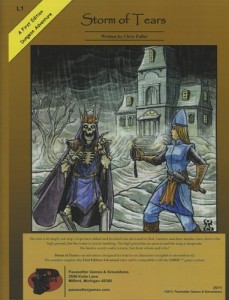 The rain will simply not stop. Crops have failed and livestock has drowned or fled. Farmers and their families have fled to the high ground, but the water is slowly building. The high priest has no answer and the king is desperate. The land is surely under a curse, but from whom and why?

This is an adventure in spooky manor home in the swamps. Demons, were-creates, and a lich haunt it, although its generally run like a lite version of Tegal or a less bizarre version of Shadowbrook. The content is not terrible, but it does suffer from a poor hook and, I believe, sub-stadard treasure. It takes a lot to of GP to make 11th level.

The rains won’t stop and the kingdom is flooded. The high priest thinks its coming from the estate of an old friend of the kingdom and the king wants you to go check it out. Seems a little lame for a 11th level character. This starts 45 wandering monster checks as you slog your way through a swamp on a shallow raft. That’s roughly seven wandering encounters on d8 table … this may be a bit excessive … especially since the wandering monster table is nothing special.

The manor home falls in to a similar category as Tegal, Shadowbrook, and Amber. It may be closest in style to Castle Amber: Both are still mostly functioning as manors but something is a little off … unlike the more bizarre Tegal or Shadowbrook. There’s a butler to open the front door and serve tea … which is actually a wood golem. There are manes in the fireplaces to keep them going, there are were-creatures in the kitchen, the baby is a demon … you get the idea. The place is sprinkled around with attempts at keeping it a bit light: weird book names in the library and funny-ish signs tacked up on the doors and the like. Things go off the fun end a bit as the party reaches the end of the adventure: there’s a huge number of rooms with iron golems in them just before reaching the big bad. The social interaction encounters are good and the adventure needs more content like those. A friendly mimc\i is hanging around as well as a couple of NPC types who can join the party and have some decent personalities. This sort of gameable content is not quite as prevalent as it could be. There are encounters that happen in media res, like demon poker game and te like, but these inevitably end up in “They Attack!” instead of much more interesting interactions and motivations.

There’s a decent amount of weird interactivity that is _just_ bordering on being close to enough. Giant transporter birdcages and things that transform and change the party. This is combined with a mix of decent treasure and boring treasure. Harvesting exotic plants? Sound great! 900 gp? Hmmm … not so great. In fact the entire adventure seems like it should be scaled down to a much lower level. A magic book that teaches you orcish is great … at a lower level. This lacks the whimsical nature os other products and that I especially like in lower-level play and it lacks the treasure and player motivation and gameable material required at higher-level play.