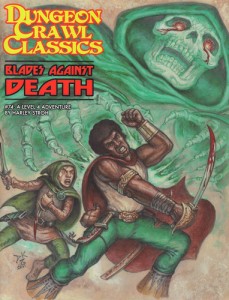 Punjar: wide-eyed madmen stalk the streets pronouncing the end of days, mail-clad priests crush the skulls of heathens underfoot, and timorous virgins are offered up in sacrifice within sooty temples. But even the greatest of shining temples and the strangest of mystery cults don’t dare to challenge the terrifying finality of Death. Until now. In Blades Against Death, the adventurers cross between the realms of the living and the dead, and wager their souls in a desperate bid to steal a soul from Death’s hoary grasp. To win over the God of Dooms, you must be the most daring, stalwart and cunning and – when all else fails – willing to test your blades against Death! A mid-level adventure for the Dungeon Crawl Classics Role Playing Game, Blades against Death offers characters a once in a lifetime escapade. Those that return from the Realms of the Dead will have earned the true title of adventurer, while those that fail will spend eternity in Death’s service.

This adventure brings the Appendix N feel the way I have not seen in some time. The characters find a way in to the afterlife to save a comrade, stealing, sneaking, conniving, and fighting till they break on thru to the other side . It hits over and over again with that N feel and delivers the way few others do.

What do you do when a PC dies? Run back to town and buy a raise dead or resurrect from someone? Hey … I’ve got an idea … why not turn that task in to an adventure ala “destroying an artifact” from the 1E DMG?! That’s what this adventure delivers. There’s a lame-o hook about being hired to play Orpheus, but the adventure points out that the far better hook is to pull this puppy out when someone dies. It points out that death is harsh in DCC, but if Orpheus can go on an adventure to bring’em back alive then the players should be able to also. I LOVE this. It’s like a whole new genre has opened up in front of me: the situational adventure. Adventures aimed at specific circumstances that the party finds themselves in. Yeah yeah, I know there have always been “use this adventure while the party is looking for an place to camp/stay the night/etc” but those have been a) lame and b) not really an adventure about the action in question but surrounding the action in question, if you get my meaning. This one is TOTALLY different though. The players are really going to feel like they have done something when they finish with it.

The adventure has four different sections. The characters hear about a fortune teller who knows the secret to brinign back the dead, the characters have to deal a sword from the moon temple that can cut the chains of death, the characters have to find a gate in to the underworld, and then they have to bargain with death for their dead comrade. That’s a pretty classic set up; only a fool would fail to recognize the classic archetypes of adventure. Cutting the bonds of death and predictions, moon temples and dicing with death … the appeal here is how it takes these classic archetypes and appeal to Appendix N to bring the adventure. Stealing in to the moon temple to steal a special sword that only appears under a full moon and that can cut the chains of deaths. Facing the hordes of temple revelers and finding a way to get the blade. Negotiating the way to the gates of the afterlife only to finally have to face a wager with death itself … I can’t imagine who wouldn’t get excited over that!. It’s all augmented by the language Harley uses. “The overfed son of a merchant”, pitch torches hiss & sputter, pale ceramic masks, sheer walls, masterfully wrought, embroidered curtains: that then is the essence of what I often bitch about. But just attaching an good adjective or adverb Harley is able to IMMEDIATELY communicate the flavor of the thing. It’s imprinted on your mind and your brain fills in the rest. These are not the big words of Gygax but a perfect word that conjures a scene. Just enough detail to let me do the rest. PERFECT examples of what I mean. It gets the DM’s brain working and I’m excitedly conjuring up the scene without any effort in doing so, my mind racing. EXCELLENT job.

It’s also an interesting example of a structured adventure that is not a railroad and not so loose so as to be “scene based.” Getting a special magic sword from the temple of the moon is a good example. It’s presented more of as a place than a railroad. Here’s the temple, here’s the various ways in and out, here’s the routine, here’s who inside, and here how you might handle some of the more common PC ploys, like slaughter, sneaking, conning, etc. It’s really set up to support a more open style of play and doesn’t assume either a hack job or anything else. That’s extended to the Gates of the Underworld portion as well: the various encounters in all the sections don’t really assume combat. The encounter folks generally will talk or interact with the party, which could lead to combat or could lead to something else. This is generally supported by JUST the right amount of room depth. There’s not layers and layers but it’s not just a boring old room either. Combined with the DCC emphasis on non-standard magic items and monsters you get great things coming out of it and a VERY Appendix N feel.

Excellent job! Well worth having!

3 Responses to DCC #74 Blades Against Death