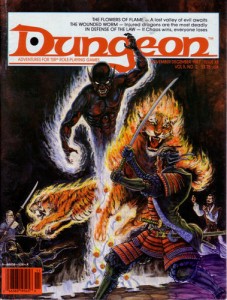 It’s weird; the OA entires in Dungeon seem much better than the normal content. Maybe the exotic environment appeals in a way that the mundane can not?

The party trips over a dungeon entrance buried in rubble. Inside is a small thirteen room dungeon that’s criss-crossed with small mite tunnels. The dungeon is full of giant rats, mites, and pesties, with the associated “big people fighting in small spaces” rules, etc. The non-standard treasure is ok, jeweled lamps, tapestries, etc. The entire point of the adventure seems to be getting the party surrounded by the beasties who attack the party in a coordinated manner. There’s just nothing here … 6 pages for what could have been a 1-page dungeon.

The party is sent to go get a blackmail item from a city councilor. There are ten or so city encounters for those that want to have some random fun, and then the councilors house is described. It’s meant to be a sneak job so there’s lots of “-15% to move silently this” and “-2% to hide in shadows that.” The house is not that interesting and just has the usual enchanted armor, etc in it. But if you take the councilor, and his short write up and the villain, and the city encounters then you could have some content for a city game. The councilor would make a good recurring asshole and the city encounters are not terrible. Not all that original but decent enough for plain content. Laborers, pilgrims, city guards, merchant, unaffiliated street gangs … just enough content to give you a great idea of what like if life in this city. It’s better than most content.

This is a three level dungeon with forty-three or so rooms. It tries to make itself interesting by introducing an NPC party of LE and LN NPC’s who are also trying to accomplish the same goal as the (presumably) LG party. Thus the players get to see how a different sort of party operates and interact with them through the various encounters the groups may have together, if/when they meet and if/when they join up to. The chaotics are after the Lawful McGuffin and so it’s off to the dungeon the party goes. The treasure is ok but the room entries get long and the creatures are stuffed in to the rooms in a somewhat haphazard manner. While many have names they don’t really interact with others other than “Attack!” and there’s no coordinated response by the occupants. There’s a throw-away description or two but not enough to really matter in a response.

This is a weird little adventure; a kind of cross between a wilderness area and an evil bad guy base. It reminds me of the older MERP supplements, and that’s always a compliment. The whole idea os that there’s an evil bad guy, a wounded dragon, that controls this region and he’s got a whole host of creatures under his control, one way or another, to help hi towards his ends. There’s a pretext adventure hook but I think the thing would be much better if you worked him in over the course of many adventures as the ringleader to a bunch of plots, maybe slowly introducing his minions and fleshing them out a bit more than what’s given the adventure. This would give you a great build-up to a main villain and nice climax sort of adventure for a party. The dragons got some interesting minions, most of which have some sort of personality. It’s the usual ‘nightmare to sort out’ descriptions but you’d have some nice story-arc material if you did.

So, I apologize to everyone I silently maligned when they said “it takes me as long to absorb a prepared adventure as it does for me to make a new one!” I now understand what you mean. This adventure is THICK. The players are used as pawns in a political game, under the pretext of retrieving a a mythical burning flower. This is close to a OA hex crawl, but without as many encounters. You hire guides, meet other parties/government agents, climb the main mountain/glacier, etc. There’s a good deal of improvisation available here for a decent DM as well as a good scattering of encounter type. The adventure is thick with … adventure. More than that … uh … go on a journey to tibet and encounter weird stuff until you get the flowers at a monastery?