The Case of the Missing Magic 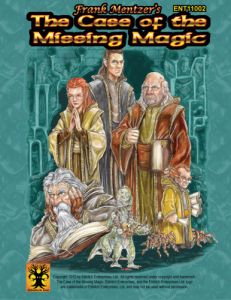 Adventures are easy to play; usually, you just fight your way through. But here, there is a mystery to be solved. Eleven key people work at the Acaeum complex. One of them is a criminal. None of them can be removed by combat.

This is a mystery adventure requiring the players to figure out who’s stealing stuff from a magical research society. It is AT LEAST three times longer than it should be. It does set things up so the mystery can’t be solved by magic, which is less forced/a better pretext than many of these adventures. It’s one of the better EE adventures … It is left as an exercise to the reader to discover the weaselyness of that last sentence.

Most mystery adventures in fantasy-land don’t work. The characters have access to too many divination type spells to check alignment, question the gods, etc. This adventure has a set up which makes the mystery work and doesn’t feel TOO forced. There’s a magical research society in a city. Because of their work magic doesn’t function inside the building. It’s also impossible to sneak stuff outside of the building because of wards, etc, that are well described. And yet some items have gone missing. The mystery will be solved in 4 days time when the Security Department runs their quarterly magical investigation report. But … the admin group is jealous of all the accolades that Security gets. They want some accolades. They hire the party on the down low to find the items/culprit so THEY can get some accolades and appear to be more competent than they actually are. That’s a very human motivation and i quite relatable and therefore plausible. If you take the environment as a given then the set up and pretext work well. That’s a job well done.

It’s hard for me to get past the setting though. It’s a magical multi-ethnic society for magical research where everyone lives together in harmony and elves and faeries hire themselves out and the streetlights are continual flame spells and blah blah blah. A magical ren faire. Bleech. But, maybe you like tat shit. If you were in to a later time period of play or some spelljammer type stuff then it would probably fit in quite well. Spelljammer makes everything better. Speaking of settings: some detail on Aquaria is shared. This is the campaign world that I THINK got a limited GaryCon release a couple of years ago. Giant squids run the world and there is some kind of weird Fair Witness/Strange in a Strange Land memory/object recall stuff going on. It’s all described in many words and has absolutely no impact on the adventure at all.

It’s all just fodder for the size 14 font. The margins are generous, the fonts big, the text verbose and conversational and the extraneous detail glorious in its mundanity. Seriously guys, What the Fuck? I know we’re all getting older but, hey, get some bifocals if you need to and pay someone to do some decent layouts for you. Fullerton or Kramer maybe. The lack of focus brings the whole adventure down. It reads more like some stream of consciousness ramblings than it does a tightly edited manuscript. It makes it hard for the user to pick out details and focus in on the important things in the adventure. For example: there are only about 20 relevant pages in the adventure. This amounts to the description of the basement and a page-long description of each of the major NPC’s. The focus of the adventure is to ‘find’ and question the major NPC’s in the adventure, the subject matter sages, and work out from there the culprit. That can be augmented by a trip to the basement. Everything else is just an after-thought, and it shows. The NPC’s are well described with lengthy personalities, histories, etc, which is absolutely correct and required for an NPC driven/social adventure. page each os a bit excessive, IMHO, and I could have done with a single page summary, a kind of tear-sheet, for reference. I find it hard to believe that the EE folks are being paid by the word, so it must just be a hard habit to break. The rest of the 40 pages of content is really disappointing. The magical research society is described generically with none of the magic or wonder that one would expect to find. There’s no flavor. Let’s be clear: I believe that when I buy a D&D product that I’m paying for someones imagination. If you give me generic and boring and mundane and the like then I’m being ripped off. I was ripped off here. There needed to be tables of weird shit, or tables to create your own weird shit, or SOMETHING like that in order to fill in the actual details of what goes on in the upper three floors of the building. And No, that’s not the DM’s fucking job. I mean, yes, it is the DM’s job but you’re ignoring the fact that I just paid you for YOUR imagination. expect you to give me something interesting for my cash and “Room 148-151: Consultation Rooms for visitors.” doesn’t get anywhere CLOSE to cutting it. I know that point of the adventure is the NPC’s and the basement, but if you are going to include forcing four security guards on the party then YOU need to describe them, not explicitly leave it as an exercise to the reader. It doesn’t have to long. That’s where actual skill comes in.

In the end, solving the mystery comes down to a single clue buried deep in the 60 pages of text. Fred says “I heard Bob was missing something” and Bob says he told no one his item was missing. How did Fred know the item was missing? That’s not enough but, as they say, the fun is in the journey and not the destination.

1 Response to The Case of the Missing Magic