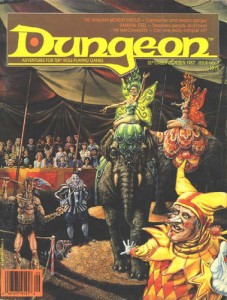 A couple of potentially decent setting adventures in this issue. Several offer a more open-ended play style without railroading that makes them more interesting to me.. They are also going to take A LOT of work to turn in to something playable. There’s also a circus adventure, as featured on the cover art. What is the fascination with the circus and carnival? I get the festivals are an important part of village life but no circus ever appeared in a D&D adventure that did not have something fishy going on. Smart players would just have their characters burn it down and put everyone to the sword summarily. It’s called ‘Risk Mitigation.’

This adventure has the party going to a wizards house in town to pick up a potion. It’s short by Dungeon standards, just 5 pages. You meat an NPC and he pays you to go pick up a potion. You go to the wizards house and pick it up. You get attacked by some paid thugs on the way to deliver it. Adventure over. What it does well is hint at other uses, so it’s more presenting several interesting NPCs and situations and then tacking on a pretext so as to call it an adventure. The NPC hook is a bit foppish, with plots and enemies. The wizards falls much more closely to the Reprobate side of the spectrum. That makes him, and his bizarro home, much more interesting than the vast majority of wizards TSR and WOTC ever published. There’s really nothing new or unusual in his home (bizarre wizard stuff!), the wizard (he’s a reprobate) the hook NPC (fop with plots) or the thugs (run away or get revenge.) What is unusual is that all of this useful detail was included in a Dungeon Magazine adventure; it’s quite unusual to see. I’ve giving this a solid C+/B- for content you can steal and reuse for your game. It’s not ground-breaking but it is decent. So, better than the vast majority of crap out there, old or new.

Part 2 of the exhaustive overview of the lands around the tortles. This is exhaustive in generic and useless detail, mostly of a trading post called Richland. I like the idea of a frontier trading post; it’s a nice change from the little usual Keep on the Borderlands type frontier land holding. The problem is that this thing is exhaustive in generic detail. “Fuller: this textile worker processes cloth by shrinking & pressing it to increase its weight.” And there are scores of examples of content like that. It add absolutely nothing to the site. No NPC’s, no colorful content, no hooks. There are priestly societies call The Lawful Brotherhood and the Neutral Faction. It tries to add some flavor with Trader Jack, the guy in charge, but it’s too little. It’s too bad; the map of outpost doesn’t suck too much (needs more surrounding/supporting lands to support all the tradesmen) and the concept of a frontier trading post is a good one. In general, trading posts and mining camps, towns, don’t get enough D&D coverage.

This is an open-ended city adventure in which the characters are paid to help a young lady elope. Two merchant houses, both alike in stature, in fair Povero. You get a decent description of the city, the characters involved, her routine, details on the places she hangs out, a schedule for a couple of events to frame the action, and a couple of complications. Good complications like: oops, that guy was actually a jerk, or What do you mean you’re not the chick we’re after? The party is then on their own to hatch some crazy scheme or schemes to grab her and deliver her to the meeting point. That’s the kind of adventure type I like most: a setting the party gets to run rampant in, be it city, dungeon, or wilderness. There’s some decent detail about the town: press gang action on the docks and the like. There’s too much extraneous detail in the various rooms described in the villas the party may venture in to; the penchant for Doomsday Book recording in this era is unfortunate and obfuscates the real content.With prep and notes you could salvage this in to a fairly routine adventure.

Yet another open-ended adventure, but this time the party is trapped in a village, having been warned that they will almost certainly be killed in a few days when they are sure to be accused of treason. They are supposed to investigate to gather evidence that they are being framed and that a certain someone close to the local lord is plotting against him. This is supposed to be open-ended like The Matchmakers was, a couple of events, some locations details, some NPC’s to interact with, etc. The Matchmakers was ok but this falls short. There’s just not enough extra detail about the village and the people that live thee to help the DM turn it in to some place real. There are maybe four interesting people in he village and one of them dies 10 minutes in to the adventure after warning the party they are sure to be accused in a couple of days time. The only details of the village are the two or three spots that contain clues and the only other people to be detailed are the traitors that the party has to discover. The rest of the content about the village isn’t even really generic; it just doesn’t exist. You get killed in a couple of days AND you almost certainly get killed if you try t leave the village early AND you get killed if you start stabbing NPC’s in the throat (though they are commoners AND you get killed if … you get the picture. This pretends to be open-ended but is a railroad. Do what the designer wants you to do or have your characters killed. Uncool.

I love seasonal activities. I run a meetup for them. I subscribe to the Indian Festival Calendar and try to hit a lot of the local corn/beet/cucumber/etc festivals in the small towns around Indiana. The year has pattern to it with seasonal activities, seasonal fruit & veg, and festivals. I get that and I love that. This yearly routine & cycle has always been a staple of life and I get the importance that festivals played, and still play, in life. BUT JESES H FUCKING CHRIST WHY THE FUCK ARE PEOPLE OBSESSED WITH PUTTING EVIL CARNIVALS IN D&D? It doesn’t work. It NEVER works. Unless you put festivals in routinely then the party will know something is up when the circus shows up. The smart thing to do is to just burn it down and kill everyone. Especially when you are level 10+, as in this adventure. Who is going to mess with your 10+ party? The local authorities? The party is probably the local law. The piece of shit adventure has a kidnapping ring run by a level 20 evil wizard. He’s got the fucking Wish spell but he kidnaps people for money. And he DOES have the Wish spell. It’s crazy .The place is thick with high-level assassins, wizards, ACs’s in the -6 to -8 range, and the like. It’s also on the up-and-up, generally, except for the kidnapping and has a hired security contingent made up of Lawful monks and good clerics. This thing is so forced as to be putrid. The ringmaster has AC -11 and is a level 15 illusionist. Why the fuck are these people here? Don’t they have towers to build and experiments to conduct so the forces of good, led by a holy paladin, can invade and win the day only to have the paladin fall and be corrupted? There’s no real adventure here, just an evil circus described so the DM can have someone kidnapped and the party can investigate. There’s no hook or adventure at all other than what I just described, which is described to the reader in just about as many words.