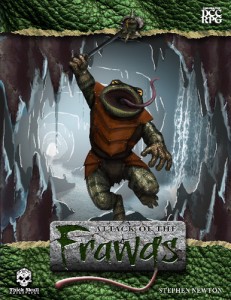 When strange creatures prey on the innocent, the meek must become the hunters! Panic is mounting in the isolated settlement of Sagewood! Frightened villagers speak in hushed tones of “walking frogs the size of men” peering at them from within the woods. And now, a severely wounded local trapper has barely managed to return from Dead Goblin Lake; the fate of his partner known only to the foul creatures that so savagely attacked them. In a small village without heroes, the townsfolk look desperately towards each other for salvation from this terror. Those who face the creatures will almost certainly pay with their lives… Are you brave enough to risk it all?

This is meant to be a linear outdoor adventure with fifteen or so encounters. It tries to bring some atmosphere … but falls short. It feels more like a 4e adventure in style than a DCC RPG adventure. I hate reviewing these sorts of adventures; they are uninspired even in their suckiness.

The townsfolk are all drinking in a tavern when someone bursts in reporting an attack. Everyone rushes out to pursue the attacking menace. And thus your 0-level mob is born. You rush down the trail to the west of the lake and have fifteen encounters before finishing the adventure. That’s the 4e feel. You WILL have these encounters. Suck it up and play the game the way the designer meant. It’s not even clear to me why the group rushed out of the tavern or why they are following the trail to the west. Because it’s there and that’s the adventure we’re playing tonight, I guess.

On the way around the lake … which you are circling because this is the adventure you are playing tonight fuck you very much … you to get fight giant beaver-things, get stuck in traps set by trappers that hunt giant beaver-things, and fight generic humanoids who look like bullywugs. There is a certain rustic charm in infusing the adventure with the trappings of the frontier: trappers, giant beavers and the like. But the entire thing is just so BLAND that it feels like a colossal waste of time. The final encounter is the only one with anything interesting and it feels more like a 4e set piece, with the frog-mother laying eggs in to water as the party fights her.

This is an EXTREMELY disappoint DCC adventure. It reminds me a lot of the 3e stuff that some of minor publishers then converted the monster stats to OSRIC or Labyrinth Lord and slapped an “OSR” sticker on it in order to milk the market for a few more sales. Different games have a different feel. DCC is about freaky shit, horribly things, unique monsters & magic, and those awesome moments that we tell stories about forever after they happen.That’s not this. There’s a cave behind a waterfall. I love that meme. It’s takes something wonderful and unusual, the waterfall, and then adds a secret to it that the players will surely discover. It’s the kind of whimsy and wonder that appeals to us. And it’s fucking boring as shit in this.