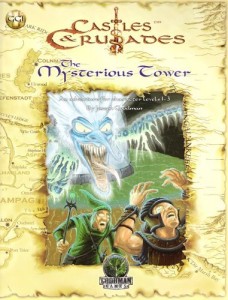 (This is the C&C version, although I understand it is based on DCC #3.)

The characters come across an ancient wizard’s tower. The nearby keep has been reduced to rubble over the ages, but the tower is in perfect condition. It is surrounded by an impenetrable force field that cannot be breached – not even by the ghost of the long-dead wizard, who has been trapped within for centuries. Surely there must be great treasure within this magical abode. But how to get to it?

This is an attempt to get in to, and then explore, and old wizards tower. A decent vertical dungeon layout, ruins levels, and overall theme but falls short in many of the rooms and in the monster department. Shades of what’s to come in the DCC RPG but mired in the usual problems of the old DCC module line.

There are some small ruins, say of a keep, and in the middle stands a tall wizards tower surrounded by a force field. There’s no visible entrance, but there is a ghostly mage sometimes seen inside the force field. The party explores the ruins to find caves and explores the caves to fine the entrance to the tower and then explores the tower. I have now covered two of the three interesting parts of the adventure.

The first part is the whole ‘find the entrance to the tower’ thing. You have to go explore the ruins around the tower and then explore the caves underneath in order to find the entrance the tower. This is a pretty nifty warm-up to the real adventure and I wish more adventures did it. There was this whole ‘transition to the mythic underworld’ meme that was going on awhile back and it’s worth repeating here: there needs to be a transition from the real world to the world of D&D. From the shopkeepers and farmers and the like to the realm to slimes, weird effects and strange creatures. When the players see their characters cross over the threshold from one to the other it add gravitas and a special feeling to what’s going on. This place is different. The rules in the real world don’t apply anymore. That’s what the search in the ruins does and the exploration of the caverns reinforces. You have to have an adventure and explore before you get to the goal of the adventure.

The vertical map is the second great part of the adventure. There’s a great cross-section map that shows the tower in the ruins, the various levels under the tower in the caverns and the various ways to get from level to level. A sinkhole to level 2, a trap door to level 1, a secret stair form levels one to three. it’s exactly the sort of strong vertical that I like seeing in a map. I love it when players don’t really know whee they are or where the stair leads. That kind of uncertainty supports a play style where the party are fearfully exploring, trying not to get killed, while getting as much PHAT L00T as possible.

The room encounters tend to be less than impressive. Mostly just a monster in a room that attacks as soon as you open the door, as supported by the copious read-aloud text which invariably ends with “It Attacks!.” Boring. There’s a puzzle/trap or two but the “It Attacks” is is singular take-away. This craptasticness is further supported by the linear nature of the individual level maps. They are really just a linear map of rooms connected by a single hallway. This is the old DCC style that I remember: one way forward and everything attacks. Not my style. There’s a couple of standard tropes in the wizards tower, once the party reaches it. Two creatures pretending to be good, one of which is not. A reluctant guardian ho is otherwise nice. And then the inevitably “Weird wizard stuff” room. This, and the treasure in it, are one of the better things in the adventure. A room full of non-standard magical stuff to play with and loot will always get my attention. There are hints here of the (far better) DCC RPG play style.

The adventure is good when it channels DCC RPG and the more … idiosyncratic.. play style that it invokes and not as good when it’s just cloning crappy 3.0/3.0 adventures.