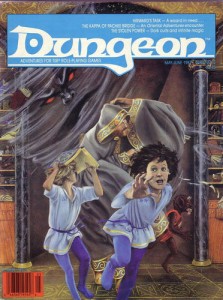 Highlight: The Kappa of Pachee Bridge

I still don’t know what the purpose of these reviews is so I’m not sure what to highlight and what to complain about. I’m currently on a “synopsis & abstract with a couple of comments on why I’d never run it” kick. Seven adventures in this one. The one that appeals most is the OA adventure, although shiv’n Mylvin Wimbly should be fun also, but not in the way the author envisioned. The manic need for verbosity is InSaNe! The purpose of the text is not to create a rich world with fully flavored backgrounds for everyone and everything. The purpose of the text is to help the DM run the damn thing; aim the text and content at things that the players will interact with not a laundry list of the contents of my kitchen drawer.

There’s a village near a swamp and the villagers are weird in the way they treat dwarves, halflings, gnomes and other short people. Eventually you learn they are being terrorized by some bogarts. The party tries to kill them but the bogarts probably run away. The village is uninspiring and the adventure short but FAR too long for what it is. There’s no reward “the DM should determine what treasure is in their lair.” Thanks fuckwit. Maybe you forgot that I’m paying YOU for YOUR imagination. The bad guys live in an old treehouse in a swamp but are mostly found in the village: a missed opportunity for a decently described swamp hunt.

Lady of the Lake
by Laura Ferguson
AD&D
Level 1

The party stumbles upon a dying woman who requests they take her to a certain lake. Maybe the villagers nearby know where it is? Really really short adventure stretched out to many pages. It got an … airy feel to it. Kind of fairy-like, although I don’t recall there being any faeries. I think she does a decent job of communicating the wonder of D&D to n00bs, but its short in content, long in words, and the village needs a lot more help. There’s a double wraith encounter which, while it helps with the airy feel, is a TPK at level 1 I’d guess. This is a really basic adventure but I dig the traditional pre-tolkein vibe.

Hitting on many crappy points: the party is sent after a book of infinite spells that was stolen by an evil cult. “Deerstalker”, and NPC is sent with the party. As far as I can tell, there’s no reason for the NPC to join up except to save the parties asses. He doesn’t even meddle or have a personality worth listing. Lame.There’s a decent number of wilderness encounters with unicorns, faerie dragons,, moondogs and the like which will parlay with the party, as well as flessing dmihumans. That part is actually nice and shows how both good and evil cratures can be integrated in to a wilderness/wanderers in a non-combat way. The core adventure, in the hideout, is smallish and full of detail that doesn’t matter. This is a good example of text background and descriptions that don’t help the DM get the ‘core’ of the room and provide trivia detail over content aimed at the players.

My favorite in the issue … but maybe because of the OA commoner/adventurer power fantasy. Villagers beg the party to help them; a kappa is eating their children. The creatures and people in this adventure are treated like they are real, with real personalities and motivations. The kappa comes off as more alien than evil, although it’s a relatable alien. The whole thing FEELS right. It feels like a good OA adventure and the aspects of it that make it good also make ‘normal’ AD&D adventures good. You can relate to the villagers and the monsters and things talk to you and treasure is interesting and the environment is interesting. The villagers don’t have much detail past a couple of the notables, but they are well done. 5 pages, once of which is a map, are better than everything else in this issue combined.

A mage hired a halfling bodyguard, recruited some orcs, and then the halfling had second thoughts when the orcs attacked some of his old adventuring party friends. He’s on the run! Fucking halflings. Should side with the mage and hunt the bastard down. I fucking hate the rascally/innocent halfling meme. The core is kind of interesting with a mage hiring bodyguards and then recruiting orcs to help him in his plots, along with the moral crisis in the halflings old pals showing up and him having to pick sides. But the ‘rascally halfling’ thing ruins it. There’s not much to this other than a brief chase through a very small forest and the three-room hideout of the mage.

The Eyes of Evil
by Tom Hickerson
AD&D
Level 10+

Manticores & men terrorizing a remote village. No real motivation except to be a hero. A very simple cave complex with only one interesting room: a chasm/vertical lava tube room. The rooms are just monster listing expanded to fill lots of space with no real content in them. The final room, right after the chasm, has a beholder, which may fit the vertical room well and turn in to an interesting tactical challenge for the level 10+ heroes. Lots of missed opportunities in this one, from cave environment to vile clerics, to things to talk to. Instead it’s just rooms of stuff to kill and loot.

The party is sent by an archmage to his headquarters to defeat a hostile air elemental. That drive him out. He abandoned all his followers/servants. You get 4,000 gp. If you take anything then the mage, who has eidetic memory, hunts you down and kills you. How much XP is a level 15 mage worth? The map layout is decent, over two levels, and there’s a decent mix of people to talk to and interact with in the fortress, but they don’t really offer anything. They have a description that concentrates on their history but not on things that help them interact with the party. Except the assholes who attack on sight or “are so frightened they attack”, which happens all too regularly. There’s some decent window-dressing, but it still doesn’t feel too much like a wizards lair … not like Many Gates of the Gann. There are one or two nice items; a wand of defoliation comes to mind, but of course you can’t keep them. The map here is decent enough and even includes an intelligently designed outdoor area, although its small. The lack of interactivity in a mages lair and the victorian mania for cataloging rooms is disappointing.