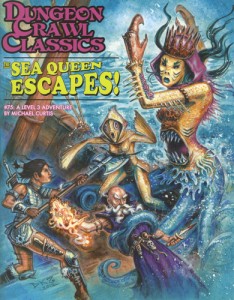 Evil lurks beneath the ocean! For years it has slumbered, but now it rises once again, threatening to wash over the surface world like a monstrous wave. Only a handful of stalwarts stand between the nefarious schemes of the deep and a world drowned in sorrows, but first they must navigate a wizard’s sanctum, a magical prison, and the most unusual dungeon they’ve ever faced! Can they stem the tide in time or will they lose themselves forever to the Sea Change curse?

This is a small collection of set-piece encounters themed around the sea without actually being underwater. It has the usual DCC emphasis on unique monsters and treasures and the locations are decently evocative … if a bit predictable. A decent journeyman effort in a field full of beginners.

DCC’s Might Deeds seem to encourage a kind of set-piece play in a non-forced way. When the modules and DM supports that play style by putting lots of stuff to interact with in the rooms then they are doing a good job. At some point there’s a line between encouraging the play style and designing set-piece encounters. Swinging from flaming chains to get across a room is cool. It’s less cool though when its clear that the DM has put the flaming chains there so the group will swing across them and more cool when somehow the party does something to put chains across the room. Hmm, a better way to describe it may be an appeal to open-ended problems. The group comes across a 50′ span they need to cross. If the DM puts chains across it from the ceiling then its clear what the party is supposed to do … and less fun in my opinion. If the party tosses a couple of ropes over rocks on the ceiling or builds a rickety bridge or gets a giant to toss them or a dragon to put its tail across it or uses a spell to create a rainbow or some such then I think its more fun. But there has to be wood planks, a giant, dragon, or rocks on the ceiling to throw ropes across. Some linear adventures have generally felt like a collection of set pieces to me and I find those less interesting. Funhouse and tournament style dungeons like C1 and C2 are a good example. Where’s the line between the DM putting in a slick wooden bridge over a lava pit and NOT putting a bridge over a lava pit? I don’t know. Both are fun, but, maybe, only fun when used in moderation. I’m probably being too harsh and compounding it by spending so much time on it. The rooms here are full of stuff: eggs, dead fish on rusty hooks from the ceiling, a jumping across a big chasm on stepping stones room, slime (the normal kind), tar (both kinds) and the like. There’s something going on in just about every room … sometimes in a good wy and sometimes in that forced 4e way.

Pontificating over. The party finds a trinket in a different horde and they start getting dreams from a sea princess who needs rescued from the jail an evil mage put her in. You go get a horn on a cool place. The horn lets you summon a dragon turtle dungeon that gets you a key that lets you get entrance to a third site that has the princess. Who then eats your face off. Yeah, you knew it was coming and so did the party. The locations themselves are pretty cool. A sea cave reached by an arcing stone bridge, and a dungeon on top of a giant turtle. The turtle dungeon, in particular, is cool because of the kind of ‘just drained’ aspect of the dungeon: all of the water has just flowed out of it so you get this kind of ‘walking across the bay after the water has gone out’ kind of feel. Or, in Indiana: walking across the old reservoir after the damn was allowed to drain it. It’s like a vision of an alien world and is done much better here, dry, than any undersea descriptions I’ve even seen in another module. I’m sure this harkens back to some Mythic Underworld theory or some such, but, it’s clear, the party is Someplace Different. The other aspect I like here is the journey to get the dungeon. Find the horn which summons the dungeon which gets you the key to the prison on an island. This is the kind of quest/journey thing which was always alluded to in the DMG, especially as I think back to the Artifact Destruction section. It was never simple, it was always a journey. It is totally present in this module but the module could have done a bit better in reinforcing that aspect … You journey to different places to do different things. The travel is glossed over, which is fair especially when you have page count to worry about, but a column or so of ideas and concepts would have been nice.

The monsters are treasure are of the good ‘New DCC’ style. Meaning they have A LOT more in common with OD&D than with any version after that. It’s all magical and mysterious and new, exactly the way a monster or magic item should be. Players should be afraid of monsters. Who knows what the fuck that thing does? You can only once discover that a troll is killed with fire/acid. A Lamprey-man?!? WTF that does that thing do??!!? That’s what I want my players thinking and that’s what the DCC RPG, and this module, deliver. Treasure too. A bit of coral you hold in your mouth to breath underwater. A intricate rope bracelet (like summer camp!) that gives you a bonus to underwater activities. These are cool items. Unique items. Not out of a book. Players hang on to the cool and unique and sell crappy generic “Sword, +1” items.