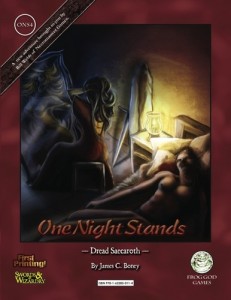 Saecaroth! That most infamous den of wickedness and hatred… a tower stretching up in defiance toward the gods themselves… where the priests of the unholy Three committed acts of such evil that the gods themselves lay the tower low. Now hardly a stone stands upon a stone where the tower once brooded; the priests and minions of the Three were driven into the passages and tunnels beneath the surface where they were hunted like rats by those powerful enough to destroy them. Two centuries have passed, and the grass has grown over the site of the obscenity which once dominated the countryside. Those with wisdom may find the entrances to the dungeons underneath, and those with strength may wrest the treasures still rumored to lie in its most hidden depths, but beware! Legends whisper that some of the priests of the Three still dwell deep below… performing unspeakable rites to their alien gods and always seeking fresh and powerful sacrifices… Now you and your comrades have learned the location and the history of this foul and forgotten place. Will you plumb its depths and bring forward the forgotten secrets and treasures that lie deep within, or will you become yet more corpses at uneasy rest in the corners of this terrible place?

These are the first two levels of a new megadungeon, Saecaroth. The encounters are suitably varied with some fine monsters, especially on level 2. Terse introduction, good room variety, nice monsters, lots of mundane loot and not much coinage. These are good dungeon levels and yu should pick this up if you have any interest in megadungeons or dungeons in general.

This is a pretty tight little package. It fits two dungeonlevels, each with about 27 rooms, in to just thirteen pages. There’s a page of pre-gens and magic items to round things out, but what you are essentially getting are a couple of very focused levels. The introduction is about a page and half long and about a half page of that is wandering monsters for the wilderness. The DM is given a couple of paragraphs about history, some words about the surrounding landscape (hence the wilderness wanderers) and then it’s GO TIME! That’s quite nice.

The two dungeon levels have some interesting maps. The maps feel both roomy and not constrained while also being laid out in in a kind of expansive way. It doesn’t feel cramped at all. There are a couple of entrances and the maps have loops, lots of same-level stairs, varied room dimensions (octagons, triangles, etc. They are really pretty nice. Maybe they could use a bit more detail in them but otherwise good. The wanderers on the first level are pretty typical but the second level brings the noise with Clawed Fiends, Sorcery Leeches, Zombie Elves and Zombie Bugbears, Fossilized Skeletons and the like. A nice variety that compliments the weird monsters on level two.

The encounters are good ones with a decent amount of variety. There’s a pit trap straight out of Grimtooth but unlike Grimtooth it doesn’t seem unfair, just wicked and fair. There’s murky pools in rooms, iron grates in the floors, weird fog, teleporters, statues to push, pull, move, sacrifice to, Bandits have sealed room doors with timbers and there are weird fountains with waters to drink and play with. There’s a minotaur which comes back to life after killed, eternally cursed. There are sumatrain rat ghouls and burning zombies and brain eating zombies and a jackel of darkness. The rooms are full of mundane treasures to haul out and sell. There does seem to be a dearth of coinage and gems/jewelry, and an abundance of magic items present. Most of the magic items are just boring old book pieces but there’s also The Flesh Mask of Ikir … Cool! There’s just not enough of cool/non-standard magi items and the mundane gems/jewelry could use more more descriptions. Except for magic the place does seem a little light on the coinage/gems/jewelry that is so critical for characters to level.

Overall a good showing. If this was the baseline quality level of our hobby then I’d be a very happy man. It’s a good place.